Standing in the pouring rain on a terrace that has seen better days watching Scottish third tier football doesn’t sound like a particular fun way to spend an early Saturday evening but unless you’ve experienced the raw beauty of Somerset Park in Ayr then your life cannot be considered complete.  Add in a greasy Scotch Pie and a mug of instant coffee and perhaps I’m beginning to wear you down.  Up there with my wedding day.

My plan for this weekend had originally involved three games, two Scottish Premier League ones and then a trip to round the weekend off at Somerset Park with their kick off being handily moved to later in the day to accommodate the TV cameras.  That was until the latest Storm (Storm Roger or something like that) hit Glasgow and my plans had to be rapidly re-arranged.  My saving grace was that I had decided to hire a car on arrival at Glasgow airport, meaning not only could I see how many Magic Doors I could find (five in two days since you asked) but was able to put Plan B into full effect. 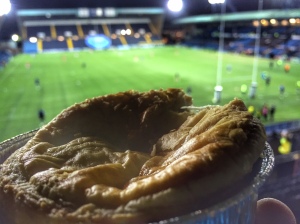 That meant a trip down to Kilmarnock’s Rugby Park on Friday rather than Saturday, to watch rugby. Never has there been a more apt name for a stadium, bar Stamford Bridge hosting the world Rubber Bridge championships.  Two trips to Scotland’s Most Improved Town (does that mean it was really really bad before, or that the improvement has been so good?) would be a bit excessive even if the opportunity for double Killie Pie was on offer.  Friday night’s rugby was a decent affair though, watched by almost double the number who would watch Kilmarnock take on Dundee on Saturday afternoon.  Should you be that way inclined, feel free to have a read of my report on that excellent website The Ball is Oval.

An early start on Saturday meant that I could complete a circuit of the surrounding area of Glasgow before heading down to Paisley for the first game of the day.  In the course of four hours I managed to visit Airdrieonians, Alloa Athletic, Albion Rovers, Clyde, Stirling Albion, Dumbarton and Morton’s grounds with a brief scenic detour to Loch Lomond Shores somewhere in between.  What was quite interesting was three of these grounds (Airdrie, Alloa Athletic and Clyde) had various Saturday morning kids coaching sessions going on, utilising the 3G facilities to full use.  Whilst the national side may be in the doldrums at the moment, the focus on youth development and the availability of facilities is something that can only benefit the development of the game and players in due course.  I watched a pitch inspection at Albion Rovers fail to convince the referee the pitch was playable and was given a guided tour of Cappielow Park, one of the best old-school grounds I have ever visited (see my pictorial highlights here). 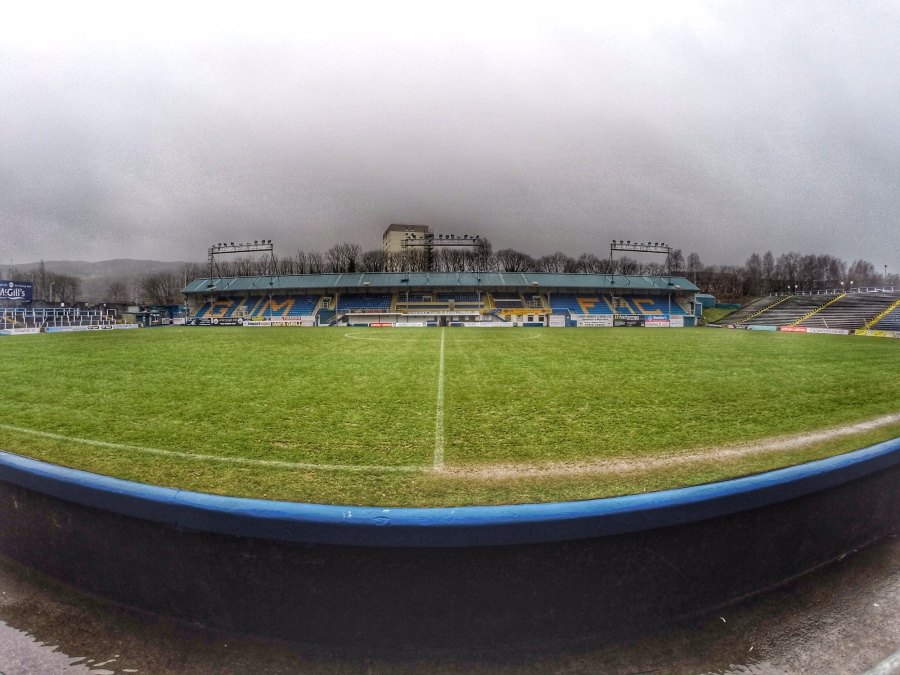 The rain hadn’t let up all day until I parked just a stones throw from St Mirren Park in Paisley.  Sunshine welcomed me to Renfrewshire’s biggest town, Paisley, birthplace of Gerard Butler, residence in his youth of David Tennant and famed for the Paisley Snail, a historic case in British Legal history, setting the precedent of modern Tort Law.  But today it was all about football.  St Mirren can lay claim to something that no other club can in British football.  They own two football stadiums.  Their old Love Street ground, vacated seven years ago is still standing after repeated planning requests for the redevelopment have been turned dow, whilst the club have moved around three-quarters of a mile westwards down Murray Street to the smart, if relatively character-less St Mirren Park. 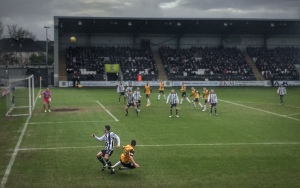 On 37 minutes something strange happened that caused players, managers and the fans to stop and wonder what was going on.  The sun came out.  It was probably the highlight of a tepid first half that the visitors could probably say they dominated with midfielder Grant Gallagher the stand-out man.  St Mirren did have the ball in the net in the first half with a corner that appeared to catch the jet stream and beat the Dumbarton keeper all ends up.  The referee obviously felt it was a tad unfair and blew for an imaginary foul.

The game sprang into life early in the second half.  Well, the one moment that could be used as part of a highlights package happened just after the hour mark when Shankland played a decent one-two that put him in the clear and he made no mistake.  The visitors tried to rally but the effective St Mirren defence held firm and take all three points to keep alive their chances of a Play-off spot at the end of the season.  Actually, in all honesty I missed the last twenty-five minutes of the match as I headed back to the car in readiness for the main event of the day happening some 33 miles due south-west.

Ayr United 2 Forfar Athletic 1 – Somerset Park – Saturday 20th February 2016 5:15pm
I made it to Somerset Park with five minutes to spare, finding a parking spot slap-bang outside the turnstiles.  From the outside the ground looked brilliant – such a contrast to St Mirren Park and some of the other grounds I had visited during the day.  The TV cameras were in town for this clash so everyone was on their best behaviour, suited, booted and well turned out.  It’s something that Ayr is used to, still smug from winning the coveted 2014 Royal Society for Public Health’s 2nd place in United Kingdom’s “healthiest High Street”, narrowly missing out on the title to Shrewsbury. 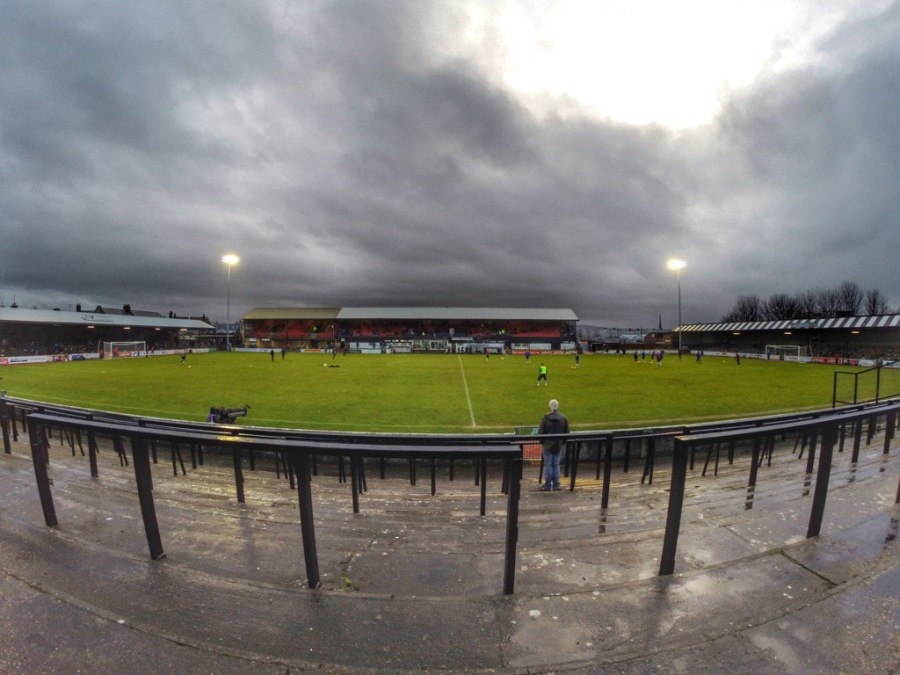 Scotch Pie in hand I headed to the open terrace.  I heard a rumour that Biffy Clyro’s lead singer, and resident of Ayr, Simon Neil was in the ground but to be honest, whilst liking their music, I wouldn’t recognise him from Adam.  This was proper football being played in a proper old ground.  The footballing world may have moved on but what’s the hurry down here in Scottish League One?  The club had one of the best stocked club shops known to man, a great covered terrace perfect for making a din and that Scotch Pie which outscored the Killie Pie in my complicated scoring system for football ground food.

The game itself was a decent affair.  The conditions made it an entertaining affair, especially when the rain really started to fall just as Ayr took the lead thanks to Ryan “Stevo” Stevenson’s header from a corner.  Half-time and another Scotch Pie?  Why not! 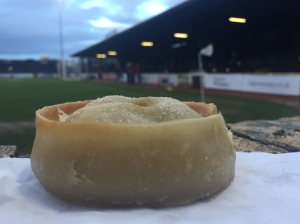 With a crowd of around 750 making the noise of 3,000 (apparently they have a mild dislike of Killmarnock in these parts), Ayr roared out for the second half but it was the visitors who drew level just after the hour mark when Ryan ran onto a smart through ball, dancing on the wet surface like a ballerina as he rounded the Ayr keeper and slotted home.  However, it was the Stevo show as the Ayr midfielder scored the winner ten minutes later with an overhead kick, again from another corner that was worthy of winning any game.

Ayr gets a massive thumbs up from the Football Tourist panel.  Give it a go…go on.