Despite all the grumblings of being a Non-League fan, we have it quite good in England.  Down here in the seventh tier of English football we often see crowds break the four figure barrier, even on occasions pulling in bigger crowds than teams in the Football League.  In the Evostik League North, FC United of Manchester average nearly 1,900, whilst five other clubs have recorded crowds of over 1,000.  In the Ryman Premier League Maidstone United continue to set the standard, averaging over 1,700 whilst both Margate and Dulwich Hamlet can lay claim to gates in excess of 2,000 so far this season.  Down at The Dripping Pan we’ve averaged just over 500 so far this season, a figure that would have been much higher if our lucrative game in January against Dulwich Hamlet would have gone ahead.  Whilst every club at our level wants bigger crowds and has to constantly fight to grab the attention of the fan who parks their car outside the ground before heading off on public transport to the Premier/Football League side down the road, we aren’t doing that bad when we look at the situation in other European leagues.

Bar Germany, nowhere else in Europe has such an extensive league pyramid.  In fact, scratch below the surface of the major leagues in other countries and you will see games played in front of one man and his dog.  Whilst the best support leagues in Europe rarely change from season to season (Germany, England, Spain, Italy and France), the worst supported leagues may raise an eyebrow or two. So here is your definitive guide to the five worst supported top football leagues in Europe*

5th Place – Montenegro (average attendance – 473)
The “Black Mountains” of the Balkans, Montenegro only got their place at the UEFA table in 2006. Prior to that they were lumped in with Yugoslavia (until 1991) and then Serbia.  Water Polo is deemed to be the most popular sport, although a silver medal in the 2012 Olympics for Womens Handball has given rise to anpther distraction from watching the domestic T-Com Prva CFL.  The best supported team is FK Sutjeska Nikšić of course, who regularly attract crowds of nearly 1,000 although the biggest club is FK Budućnost Podgorica who have fallen on harder times and have to make do with just crowds of around 700 floating around the 12,000 capacity national stadium, the Pod Goricom.

4th Place – Faroe Islands (average attendance – 472)
With a population of around 50,000, the fact that 1% regularly watch the domestic EffoDeildin is actually pretty impressive – significantly more than virtually every other nation in the world.  Considering the only other leisure activities involve puffin watching, lace knitting or sheep baiting, then football is actually a very passionate affair on the islands.  B36 Tórshavn are the best supported and most successful side, regularly trying their hand to progress in the Champions League qualifying rounds.  They play at the national stadium, the Gundadalur, a short work from the bright lights of central Tórshavn in front of an average 774, with derbies against HB often attracting crowds of over 2,000. 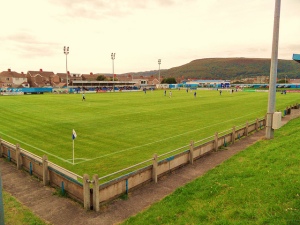 Despite the promise of three European spots for the twelve teams who complete in the Corbett Sport Welsh Premier League (plus a fourth spot for the winners of the Welsh Cup), the clubs fail to attract the attention of the Cardiff City/Swansea City/Wrexham/Newport County supporting locals.  Add in the distractions of major European Rugby Union most weekends and you can see why the domestic game struggles to grab the attention of the locals.  In the past few seasons, Neath FC tried to raise the bar by bringing in players like former Football League sharp-shooter Lee Trundle, but soon found themselves in financial ruin and out of the league.  Today, most games are played out in front of less than 500 fans with Bangor City the best supported, gaining some new fans after their run in the Champions League qualifying competition this year and their picturesque Nantporth ground on the banks of the Menai Straits.  Port Talbot Town, sitting in between Cardiff and Swansea are bottom of the attendance list, although their Victoria Road ground allows you to watch games from the comfort of your car.

2nd Place – Latvia (average attendance – 276)
It’s all about Ice Hockey in Latvia when those long winter nights descend on cities like Riga.  Football takes a back seat, despite a decent national team showing over the past few years.  Domestic crowds in the catchily-named SMSCredit.lv Virsliga are on a par with the majority of teams in the Ryman Premier League with only FK Liepāja breaking the 1,000 mark.  Stadiums are more akin to county league standards although the beer is cheaper.  The big Riga derby played between former champions Skonto and Metta is normally played out in front of a 90% empty national stadium.

As an outsider, you may wonder what Estonians have to do if it isn’t pitching up to watch a game of football each week.  Well, having visited the beautiful city of Tallinn I can suggest that the local “attractions” keep the locals amused come 3pm on a Saturday.  Add in some cheap beer, even cheaper local spirits and their love of Ice Hockey and Basketball and you can understand why an average Meistriliiga game is only watched by 255.  The best supported team, Flora Tallinn who play in the 10,000 all seater Le Coq Arena often break the 1,000 mark but the rest of the league get crowds that wouldn’t look out of place in the Ryman League South.

* We do not have any figures for potentially smaller leagues such as Andorra or Malta.