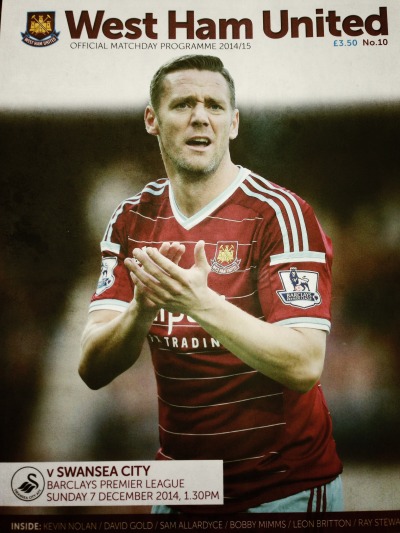 It’s a good time to be a West Ham fan.  Yesterday our fellow London rivals Arsenal, Chelsea and Millwall all lost, whilst Spurs could only manage a goal less draw at home to Crystal Palace.  Coming into the game at The Boleyn Ground against Swansea City the team knew a win would take them to third…THIRD.  I cannot remember the last time The Hammers were in the top three, even after the opening day of the season.  Third.  Champions League Group automatic entry third.  Top three in one of the richest leagues in the world.

We all know it wont last.  It can’t last. Why?  Well we can blame the economist Francis Galton for making our dreams fade and die.  19th Century Galton was credited with first documenting the Theory of Regression.  Whilst Galton used the biological phenomenon of the height of ancestors to demonstrate his theory, it can be applied today in predicting bouncebackability (he actually invented that word too) of teams who either punch above their weight or failed to meet expectations.  Everyone will always gravitate to their natural position.

But that’s not to say there hasn’t been a seismic shift in events at Upton Park.  After Allardyce was given a seat at the bar of the last chance saloon in the summer, he used the close season well, and whether it was his hard work, that of “attacking” coach Teddy Sheringham or the scouting network, he has built one of the best looking West Ham side’s that I can ever remember.  By best looking I mean in terms of positive and attacking play rather than any looks, although the shift to the blue shorts is very pleasing on the eye.

Few expected the likes of Enner Valencia, Cheikhou Kouyaté and Diafra Sakho to settle in East London so quickly but they have.  Sakho in particular has been a revelation.  The Senegal international had been playing in the French Second Division until the summer, but someone spotted something in him.  Whoever that was deserves a knighthood.  Sakho has been a handful for Premier League defences so far this season, hitting seven goals in just nine games before the game against Swansea.  Thoughts turn to a young Frank McAvennie when he first came to England back in 1985 and terrorized English defences. 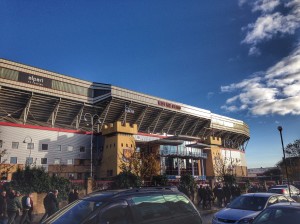 The lofty position hasn’t been down to fluke either.  I’ve never been an Allardyce fan, hating this traditional Anti-football which hasn’t ever proved to deliver anything apart from neckache to fans.  His purchase last season of Andy Carroll was seen as the final piece in his long-ball jigsaw, and when the injury-prone striker inevitably ended up on the operating table, there was no plan B.  Even in pre-season when I saw them against Stevenage there appeared to be zero attacking intent.  Four months later they are playing some of the best football in the Premier League and have beaten Champions League qualifiers Liverpool and Manchester City comprehensively at Upton Park, whilst away from home they have been impressive, sticking to an attacking 4-4-2 with the resurgent Stewart Downing finally being freed from his wing.

Despite a Sunday lunchtime slot for this game, the game was a sell-out, as had every other Premier League game bar the one versus Aston Villa this season.  With the rest of the Fuller family up North it was took good an opportunity to miss.  A £43 ticket is easier to swallow if the football on offer is attractive and positive.

In a pre-match interview with Radio 5Live, Co-Chairman David Gold admitted that he was very surprised that the club were so high up the table.  “Not that don’t believe that we are a good team, we probably didn’t expect to be in this position at this stage of the season”.  It would of course be amiss to forget that the visitors from Wales were also having an amazing season.  After starting off like a train they had followed the Galton theory and dropped back down the table, only to start to climb again in the last few weeks.  In fact, a win at Upton Park would see them leap-frog the Hammers and Arsenal into the top six. 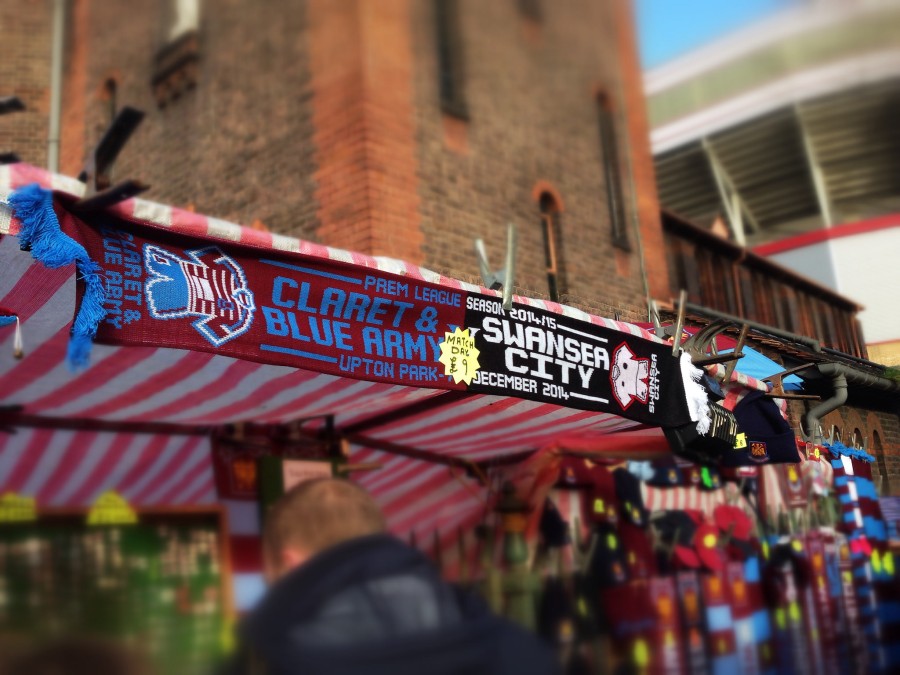 The sun was shining and it was felt good to be back in East London.  Due to overseas travel and my commitments at Lewes (plus the dire football on display in recent seasons) I had been a rare visitor to these parts, but just like a London bus, I would be following today’s game with visits to the next two Premier League games here.  But for now it was time to see for myself exactly how this new team were taking the table by storm.

West Ham United 3 Swansea City 1 – The Boleyn Ground – Sunday 7th December 2014
It took the introduction of that man Sakho to power West Ham to victory against The Swans, adding the cutting edge to the dominance in possession.  This was a great game of football, full of attacking intent from both sides, controversy and a couple of great goals.  Whilst the game between Southampton and Manchester United tomorrow night will see one of them reclaim third place, for 30 hours or so, The Hammers could look down on the likes of Arsenal, Spurs, Liverpool and United themselves with a sense of pride and achievement.

The return to form of Andy Carroll had been perfectly timed, with Sakho missing from the past few games but it was the re-introduction of Barcelona – Alex Song that gave West Ham the victory.  Quite how and why Arsenal let their former player slip through their fingers in the summer is beyond me.  Likewise, their attacking full back Carl Jenkinson seems to revel playing in a side that allows him to run behind the opposing full backs.

For all of their opening possession it was the visitors who took the lead.  Despite West Ham being “all over them like a cheap suit”, they couldn’t “put the ball in the Onion bag” (those two quotes courtesy of the person sitting behind me), Swansea attacked down the left-hand side, Montero got in behind Jenkinson and played the ball across the face of goal for the on-rushing Bony to easy tap home.  Swansea’s tactics then switched from mildly attacking to retention and time-wasting.  With seventy minutes to hold on, it was a foolhardy tactic and it was always going to be a case of when and not if West Ham scored. 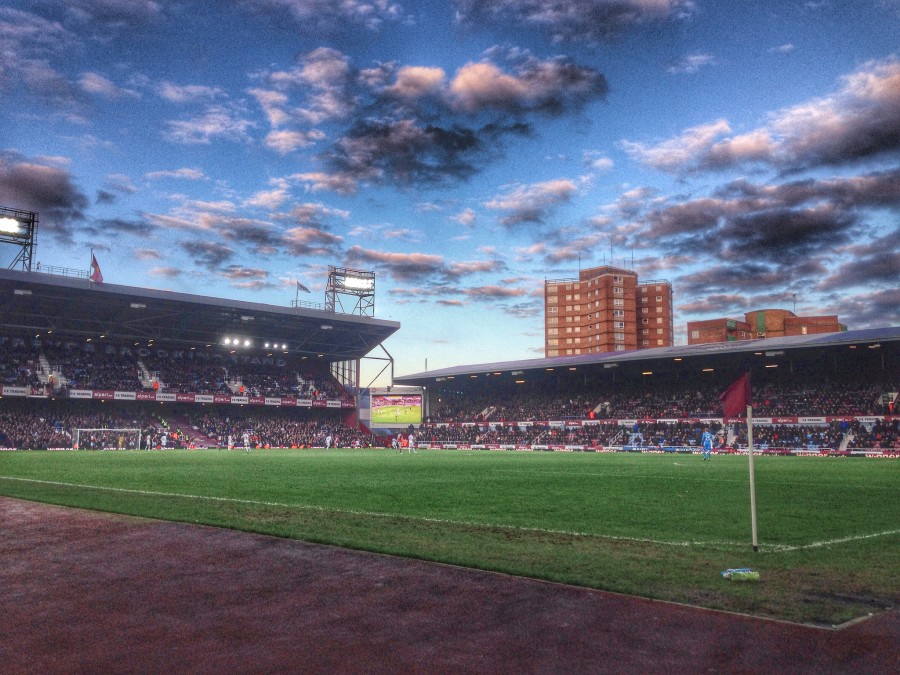 For all the great passing play from the home side, the equaliser came from a familiar route in the 40th minute.  Jenkinson crossed from the left and Carroll out-jumped his marker and headed home.

Swansea started the second half the better side and a powerful run through the middle by Bony followed by a shot that hit the bar had most of the West Ham fans groaning that this wouldn’t be our day.  But then Carroll rose again and headed Downing’s corner into the net via Rangel’s desperate dive to keep it out. But the main talking point came moments later.

Earlier in the season when Lewes took on Margate at The Dripping Pan we had our centre-back Ollie Rowe sent off for a “professional foul”, or to give it its correct term, stopping a clear goal-scoring opportunity.  Rowe had stumbled when chasing a Margate forward and as he fell he took the legs of the attacker.  But the attacker got to his feet, carried on and managed to get a shot in which the Lewes keeper, Rikki Banks, saved.  The referee pulled play back and sent Rowe off.  How could it be claimed that he denied a goal-scoring opportunity if he then went on and got his shot on?  What would have happened if he would have scored? As we were told at the time by the officials, the fact that there had been a clear foul, it is irrelevant what the end result was.  If he would have scored them it is a different matter, and the offender would have been cautioned.

Sakho outpaced the Swansea defence and took the ball passed the on-rushing Swansea keeper Fabianski.  The keeper tried to take Sakho out but the forward was too quick for him and he recovered his poise and from a tight angle tried to slot the ball home, only to see his shot come back off the post.  Referee Chris Foy brought play back for a free-kick and dismissed the keeper.  Swansea’s main argument was that Sakho had allegedly handled the ball rather than Fabianski’s foul.

The game was wrapped up when Sakho once again showed his pace and power, running onto a flick from Carroll to smash the ball home from the edge of the box.  3-1 and West Ham were going third.  Man of the Match was always going to be given to the two-goal Andy Carroll but it was clear to see that it was Alex Song who called the tune today and without his energy, drive and tempo it could have been a very different result.