Every Saturday football fans from Ireland’s two biggest cities, Belfast and Dublin head off in serious numbers to support their teams. Unfortunately for the League of Ireland and the Danska Premier League that often means heading to the airport rather than the stadium down the road and jumping aboard the Ryanair express to Liverpool, Manchester or London where they will join the rest of the Premier League fans on the road to expensive, ultimate disappointment. The huge expansion of the budget airline network has meant that it is often as cheap and fast to fly from Dublin to Manchester than it is to get the train from SE9 to London Bridge using SouthEastern Railways. Back in the day when clubs considered foreign pastures exotic places such as Cork, Coleraine and Cowdenbeath, the scouts from the English top league were notorious for finding Celtic gems such as Alan Hanson (Partick Thistle), Frank McAvennie (St Mirrean) and Roy Keane (Cobh Ramblers). The backbone of the finest clubs in Europe thirty years ago was made from Irish rock and Scottish steel.

The expansion of scouting networks to the other side of the English Channel, and further afield meant that the reliance on players from Ireland in particular diminished. With it went some of the investment in the home leagues and so the downward spiral started. As soon as the likes of Ryanair and Easyjet started offering cheap seats across the Irish Sea clubs in Ireland had to start facing up to the bleak reality of having to compete each week with the Premier League for fans.

Tourism is the one growth factor in the Irish economy, ravaged by the global financial crisis and the bottom falling out of the property market. Whilst the budget airlines continue to drop their cargos of Craic-seeking tourists each week, few ever think about heading to a stadium to take in a local game. But not me! Oh no. Yes, there would be some Guinness and yes there would be a full Irish breakfast or two but I would be heading off to watch a game not only in Dublin but in a week’s time in Belfast too. If you are going to do your research, do it properly. First up would be a trip to one of Ireland’s most successful clubs, Shamrock Rovers.

An hour after losing the tourists at the airport we were hoping off the bus in Tallaght, not the traditional stop on the tourist trail. Our hotel was some way out of the city centre, but conveniently located opposite Shamrock Rover’s Tallaght Stadium. Funny that, said CMF. Of course I pleaded ignorance and blamed it on the corporate travel agent we use at work. We’d only been in the hotel a matter of minutes before a waitress in the bar spotted us.

“Look at you’se all. You need a full Irish breakfast immediate. Guinness with that for the adults?” Irish hospitality at its best. The Fuller girls had mapped a day of touristy things for me to do which conveniently avoided any pubs in Temple Bar and instead was to take us 44 metres up in the air, walking along the roof of Croke Park. Certainly one to enjoy for those, unlike me, who don’t have a morbid fear of heights, especially in the section when the walkway juts out over the pitch. “This is a cantilever design, meaning essentially there is nothing keeping us up in the air” Our chatty guide certainly had a way with words to put us at ease. Spending 90 minutes 17 stories in the air is enough to send even the most sober person to the bar. 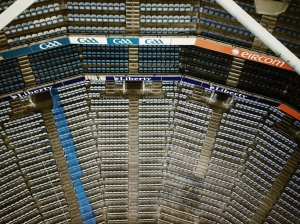 Fast forward two hours and I was sitting in a deserted Tallaght Stadium as the players of Shamrock Rovers and Limerick went through their warm ups. This was a dead rubber in terms of influence on the final shake up for the season. Shamrock could grab the final Europa League spot but only with a bizarre set of results, like those you see in Italy the end of a season. Limerick were firmly wedged in mid-table. However, all of the drama would be happening away from Dublin as just one point separated Dundalk from Cork City at the top as the two sides met in County Louth.

Whilst this would be the climax to the season that the League of Ireland would have wanted, they haven’t really enjoyed the best decade. Three of its most successful clubs, Bohemians, Shelbourne and Shamrock Rovers have all come perilously close to ceasing to exist, whilst others such as Drogheda and Cork weren’t so lucky and had to reform. The move to a summer league was designed to breathe life back into the league and take advantage of the lack of Premier League action from May to August. However, with average crowds in the top league of just over 1,500, it is hard to see how some clubs remain afloat.

Whilst today, Shamrock Rovers are the best supported side in Ireland, they haven’t always had the rub of the green. Huge off-the-field issues, changes of ownership and legal and financial wranglings dogged them in the late 1990’s and into this millennium until finally in 2005 they were relegated and faced financial meltdown, hampered by falling attendances in a ground they didn’t own. With a record 17 League of Ireland titles to their name as well as providing the national team with more players than any other Irish club, Rovers simply couldn’t die.

Once again, supporter power was the answer and a fan-ownership model saved the day, with. 400-strong group managing to wrestle power from the want-away owner. The fan-owned club achieved promotion back to the top league at the first attempt and have never looked back. Ten years in and they can call the 6,000 all-seater Tallaght Stadium home as well as two League of Ireland titles plus a couple of decent European campaigns under their belt including the 2011-12 season when after losing in the Champions League Play-off against FC Copenhagen they qualified for the Europa League Group Stages, the first time an Irish club has done so, taking in ties against Tottenham, Hotspur, Rubin Kazan and PAOK.

Rovers home form had been pretty good this season, and they came into the final game having won their last four at Tallaght in a run that stretched back to those long balmy summer nights in July. A must for any visitor to the Tallaght Stadium is to visit the ticket office. This isn’t your run of the mill office – it is a memorabilia-laden trip down memory lane. Well worth a half an hour of anyone’s time. Inside the stadium the two sided stadiums probably does the job in the warmer months, but in the dying days of October it was bloody freezing, with the wind blowing in from each end. The hardcore Rovers fans were all huddled together in the east stand, whilst the Limerick fans had arrived in fancy dress. Scooby Do, Super Mario, Osama Bin Laden and finally one chap who obviously got to the fancy dress shop late and had to take the last outfit on the peg, Katie Price. Actually he pulled the look off rather well and could probably earn a living as her body double and brain.

Shamrock Rovers 1 Limerick 0 – Tallaght Stadium – Friday 24th October 2014
The two teams took to the field with Erasure’s “A Little Respect” playing. Forty five minutes later the referee blew for half time and there hadn’t been much that had warmed our freezing cockles in between a Bell and a whistle (cryptic reference there pop pickers) with Limerick coming the closest to breaking the deadlock when Ian Turner’s shot hit the underside of the bar and flew back out. At least the fans tried to generate some real atmosphere, despite this being the last game of the season. 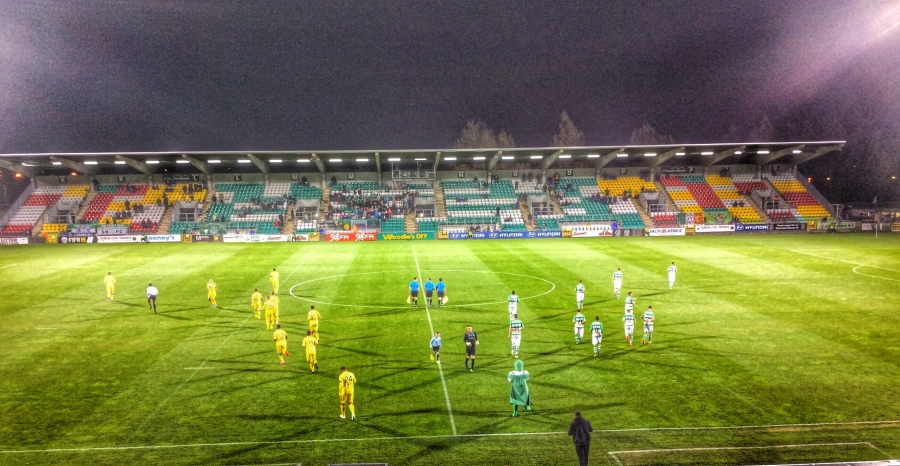 Even the most optimistic reporters around me were struggling to fill their word count for the match reports. Just after half-time the effects of my Irish breakfast were wearing off and so I ventured down to the chip van, which of course meant as soon as I was out of sight of the pitch the only piece of drama in the evening occurred. Rovers were awarded a penalty when Kilduff was adjudged to have been fouled by Oji. McCabe stepped up and scored. Typing and eating steaming chips doesn’t really mix so I relied on voice to text to complete my match report, which makes interesting reading, interspersed with phrases like “oooh hot” and “mmmm vinegar”. Hard to really factor those into the second half update. Fortunately I’d polished them off before anything else meaningful happened when Limerick missed a final minute sitter. Full time on the game and the season. A small mutter went up at the announcement of Dundalk’s win at home against Cork City, perhaps in irony at the fact the Dundalk manager was Stephen Kenny, sacked by Rovers two years ago, now a double winner. However, their real ire was saved for the Bohemians score, a 2-1 win over Derry City. They really don’t like the chaps from Dalymount Park in these parts.

So what next for Rovers? The League of Ireland continues to be a very open league, with Dundalk becoming the fourth winner in the last five years.  Whilst European football brings in additional revenue for the clubs involved, it is interesting that the team who ends up winning the league are those who do not have the distraction of Europe.  Rover’s issue has been the lack of goals, scoring 30 less than champions Dundalk.

Sunshine greeted us the following morning as we headed out to see the main sights of Dublin, which were punctuated by numerous refuelling stops. My aim was to find and sample the three “lesser” spotted variants of Guinness – Foreign Extra Stout, Special Export and the relatively new Black Lager. Objectives achieved, Lewes and West Ham recorded wins in the early games and another Irish breakfast that Alan (Partridge) would have struggled to have fitted on his special big plate and I was a very happy man. Life was good. Hats off to Dublin for delivering on virtually every aspect of a great weekend – the actual match aside. Now, could Belfast step up to the plate?