After a long overdue absence from these pages, our Englishman in New York, Luge Pravda is BACK.  And when we say BACK we really mean BACK.  Whilst the Guinness International Champions Cup is talking taking place across the States, we wanted Luge to experience REAL US soccer and tell us had the World Cup effect kicked in yet.  Miami, Seattle, Columbus Ohio?  Nope.  Somewhere even better than that….

Two weeks ago I was supposed to be in Rochester, NY for a client meeting. For those not well versed in non-big US city geography, think upstate New York, near Niagara, next to Canada and you’re getting very warm. Unfortunately, a massive storm put pay to my flight (as I was in a cab on the way to the airport, such is the glamor of business travel) so Rochester and I would have to wait to become acquainted. Fast forward two weeks and I had a rearranged meeting on a Monday. Not wanting to cancel a second time I sacrificed my Sunday to fly up at lunch time and make an afternoon/evening of it. Of course my flight was delayed an hour or so, so by the time I arrived in my hotel in downtown Rochester it was too late to do what I originally planned – hire a bike – so I did what any discerning business traveler does, I reached for the local guide magazine on the desk. Which as usual, was pretty useless, all adverts for golf courses and wedding locations. Unperturbed, I carried on my search and quite fortuitously stumbled upon a soccer (sorry, I have lived here too long, football) match. When I originally told The Ball is Round I think he imagined I was wandering the streets; sorry, stumbled as in web search. Anyway, the Rochester Rhinos were playing the Orlando City Lions, in a USL Pro match. The USL being the third tier of US soccer, below the NASL and the top-of-the-pyramid MLS above it.

The time was 3:15pm. The match started at 4:05pm (of course – and something that causes endless amusement to The Ball is Round himself – US matches never start on the hour, unless they involve the US national team in the small matter of a World Cup for instance, and all because of TV advertising). With no cycling on my horizon, and less than favorable reviews for a local brewery on Yelp, panic set in: I didn’t have a car, didn’t have time to Google local public transport options, so had to hope the stadium wasn’t miles away somewhere. Little did I know I could actually see the floodlights from my hotel room if I looked in the right direction: Google maps confirmed a 35 minute walk (and we all know it assumes you walk at your dear old granny’s pace).

So I set off. My walk took me through a very dead quiet downtown Rochester. Like many US cities, not much goes on downtown as people tend to live in the suburbs. Imagine Brighton being like a ghost town on a Sunday? Exactly, it always strikes me as strange and somewhat eerie. I did, however, walk past a prescription drug deal going down outside a derelict ‘adult’ DVD store though. With a spring in my step – I’m not in the market for painkillers thank you very much – I turned a corner and saw the giant Kodak building looming large in the skyline.

Rochester is/was famous for being home to a select group of companies – not for nothing was it known as the ‘World’s Image Center’ – namely, Kodak Eastman, Bausch & Lomb and Xerox. Of course the smartphone all but killed off Kodak many years ago but subletting their old parking lot, in the shadows of the Kodak building sits the Frontier Field, the home of Triple A Baseball team, the Rochester Redwings. This was a good sign as Google maps was telling me Sahlen’s Stadium, the Rhino’s home, was just behind it.

I got to my hotel room at 3pm. At 3.50pm I was sat in the bleachers with a beer in hand waiting for a team I never even knew existed some 35 minutes earlier. I had a feeling The Ball is Round would be proud of me.

* All US sports events are proceeded by a rendition of the national anthem. This was one of the best I’ve heard. A young local lass, I’m sure she’ll go far on X-Factor someday. (If you want to hear a bad, and I mean BAD, national anthem rendition, check this one out).

* One player out of 22, the Orlando Number 16 had black boots. The majority wore lime green or orange but fortunately no mixing of the two.

* The hardcore are called the Oak Street Brigade and sit in section 101. There are about 30 of them. They sing the ubiquitous ‘Lets’s go <insert team name>‘. ‘Let’s go Rhino’s’. Original. 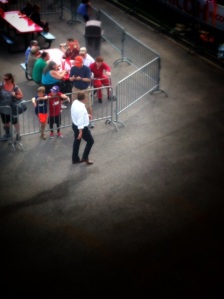 * I was not the only Englishman in attendance, 100% guaranteed. Ex Toffee Adrian Heath was here in his capacity as manager of Orlando. American life seems to have treated him well (but at least he was wearing trousers, a shirt and smart shoes. Are you listening ‘Big Phil’ Scolari?)

* The stadium announcer proclaimed 8 (eight) thousand people were in attendance. The place holds thirteen thousand apparently. I would be amazed if there were more than four thousand, maybe less. Look at those stands above!

* Certain parts of the bleachers seemed to go crazier for ‘Cotton Eyed Joe’ being played over the PA than some of the football on show. I put that down to being in upstate New York. In New York City it would be Jay-Z causing a merry fervor.

Oh, the match you ask? Well, the first shot on target in anger was in 18th min, with some of neat build up to be fair. Encouraging at this level, but equally the football was in the main also what you tend to get at this level: enthusiastic, probing, energetic, perhaps sometimes what English journalists might call ‘honest’. The match ended 1-0 to the Rhinos, after a 1st half goal. Which I missed – of course I did – as I was outside checking out with some interest precisely what the local legend Nick Tahou Hots food truck was serving called, wait for it, ‘Garbage Plates’. As seen on Adam Richman’s ‘Man vs Food’ a few years back a garbage plate, a local Rochester specialty, is a heart attack on a plate:

So what did I learn about the Rochester Rhinos? Not a great deal, but I will forever be in their debt: just when flying to a new city on a Sunday afternoon for a meeting the next morning looked like a sacrifice too far, up popped a random soccer team I had never heard of, to provide a few very pleasant hours in the sunshine watching a sport I love. I’ll be keeping my eyes on them Rhinos now for sure * (*I probably won’t but you get my drift).

As for the rescheduled meeting, it went very well, thank you. Unfortunately my flight on the Monday evening back to NYC was cancelled due to, once again, inclement weather. Shame the Rhinos weren’t playing back to back matches.