Remember the media outcry back in the run up to the 2010 FIFA World Cup in South Africa when Fabio Capello made it very clear that David Beckham wasn’t in his plans?  Well, take that and times that by a hundred for the mood in the US regarding coach Jurgen Klinsmann’s decision to drop Landon Donovan from his final squad of 23 to travel to Brazil. 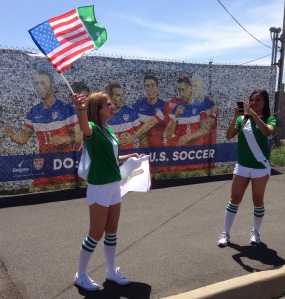 Whilst Beckham was one of the biggest brands (since when did they stop being just players?) in world football in 2010, he had peaked as a player in 2010 and public sentiment was the main driver behind the emotion for his inclusion on his fourth World Cup.  However, in the case of Donovan, his impact on the US game can never be overlooked even today.  He’s got 156 caps, 57 international goals and has scored as often at World Cups as Ballon d’Or winners Lionel Messi and Cristiano Ronaldo combined, as FourFourTwo wrote.  There has been previous between Donovan and Klinsmann which stems from his unsuccessful spell playing for Bayern Munich when the German was in charge in 2009.  In his place, Klinsmann drafted in 19-year-old Julian Green who had been playing for the past few years for Bayern Munich reserves.  That’s, reserves…not first team. Armed with these facts you can perhaps understand the outcry even more.

As luck would have it (no, seriously it was a complete coincidence) I was in New York for work at the very time when the USA would be playing one of their final warm up games for Brazil.  The visitors, no doubt on a Nike-sponsored tour of America to do some shopping, see some sights and pretend to play 90 minutes of football were Turkey, ranked a rather harsh 39th in the latest Coca-Cola World Rankings (is nothing sacred from corporate sponsorship these days???).  Of course I wanted to go – it would be a travesty if I couldn’t get to the game, especially as it was just a 15 minute train ride away from my hotel in Lower Manhattan.  However, tickets apparently were like gold dust.  And here is one of those bizarre logics of football in the USA.

The RedBull Arena is a tidy, if a little “unfinished” in design, 25,000 all seater stadium.  Perfectly adequate for the home team, the New York RedBulls (don’t get me started on the fact they don’t play in either New York as a city or as a state!) average around 19,000 each week, although on my last visit in September 2012 I could almost count the crowd on one hand, but wasn’t it lacking a bit in ambition not to host this game just a few miles north at the 82,000 capacity MetLife stadium?  That was a question for debate for Andy Mack, Mr Team Sport USA and procurer of the Willy Wonka Golden tickets for this sell out game.

“Hmm…well if you held it there then you’d perhaps get 40,000” was his initial answer.  Surely that is dependent on the ticket pricing?  Our seats for this game were $51 each, some of the cheapest on offer in the top tier in the corner.  Perhaps if ticket prices were lowered, then they would sell more and could justify moving it to a much bigger stadium?  My pricing theory once again raises it’s head – “no football tickets should cost more than 4 x the average pint of beer in a pub in the city centre” – so whilst drinking a very pleasant Union Jack IPA in the Rattle ‘n’ Hum on 34th Street I calculated that this was $36.  The one thing that the FA should be applauded for (and there aren’t many things) is keeping the cost of watching our national team at Wembley reasonable, if not a bargain when compared to watching a game at The Emirates or Stamford Bridge.

My plan had been simple.  Arrive in New York at 10.30am, taxi to hotel, walk across the street to the PATH train at the World Trade Center, 15 minutes later I would be joining the American Outlaws at their tailgate party and march to the ground.  Simple.  Alas, two things got in the way.  Firstly, I was distracted by Nicole Sherzinger in the arrivals hall at JFK.  A baseball cap and dark sunglasses were supposed to dumb-down attention but the fact she was wearing what could only be described as a ripped body stocking only covered with a pair of hot pants sort of gave the game away.  That and the fact she was with Lewis Hamilton.  A moment’s distraction caused me to miss my case going round the carousel, meaning by the time I got out of the terminal all the taxis were gone.  Finally I got to Manhattan, dropped my bag and went to the PATH.  No trains at the weekend.  WTF?  There’s a major sporting event on and one of the main transport links is closed for engineering work.  Obviously been taking lessons from London Underground on that score. 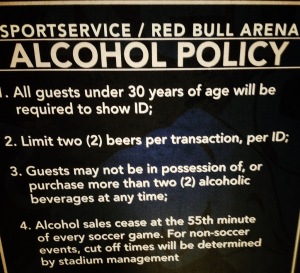 So my plans for tailgating and marching were dashed.  Instead I met up with Luge and Andy for a swift beer in the shadow of the Empire State Building before getting a train from 33rd St.  We were joined en route by Andy’s mate Alexi who had come prepared for the short journey with a Starbucks cup full of Sambucus, as you do in these parts and were soon making the short walk from Harrison station to the RedBull Arena.  Now, I have been chastised in the past for being rude about Harrison, New Jersey, home of Daisy Fuentes, everyone’s favourite Cuban (or is it just me), but it really is a desperate place on the eye.  I’m sure it has some nice bits, but it’s no Hoboken.  For now it is simply the alighting point for thousands of football fans.

The fans were certainly out in force.  I was very disappointed not to see anyone dressed as Uncle Sam, Bill Clinton or The Statue of Liberty and as we entered the stadium nor being given big foam hands with “USA, Number 1” on.  Instead we were faced with queues a mile long for beer on the concourse.  The US population is wising up and their palette is maturing.  We could have bought our 2 pints of Coors Lite (with ID of course) without any queue at all but who wants that these days?  It’s all about Goose Island, Honkers Ale or Patriot Ale.  Twenty minutes later, and three Nathan’s hot dogs later we had our beers and headed up to the seats just in time to see the teams emerge at 2.03pm (once again, kick off time in the US simply means what time the teams may come out of the tunnel).

USA 2 Turkey 1 – RedBull Arena – Sunday 1st June 2014
In the grand scheme of events this was just a win in a friendly game against a team significantly lower in the FIFA rankings.  I’m sure Turkey fans or observers would point out it was the end of a long European season, it was a hot day and they had flown thousands of miles across the world to play three games, of which this was the last.  In other words, could Turkey actually be arsed?  But that would be disingenuous on the US who tried to take the game to the visitors but were often frustrated by their delaying and unsporting tactics.

I have to say I was pleasantly surprised.  The US team had pace, played good football to feet and used the modest strengths of certain players.  None more so than Jozy Altidore up front who has had a relatively disappointing spell at Sunderland with just one goal in 30 performances yet put him in an US shirt and he is a world beater.  “Like a good Emile Heskey” suggested Andy Mack.  I’d probably not go that far but the Turkish defence had no idea how to handle him.  He had a goal disallowed for a non-existent foul on the keeper and created havoc when running at the defenders.

But it wasn’t the physical approach that led to the opening goal.  A smart one-two between Fabian Johnson and Michael Bradley in the 26th minute saw the ball bounce kindly to Johnson and he volleyed home.  Queue some wild celebrations, fist pumping and “Turkey, you suck my balls” shouts from the fans around us.

At the far end Everton’s Tim Howard was rarely troubled and had to deal with the continuing threat of Turkey players throwing themselves to the floor in the area rather than shots on target.  Before he collapsed with boredom he was replaced at half-time by Villa’s Brad Guzan.  At the other end, the Turkish keeper, Kivrak seemed to be flapping at everything and was at fault for the second in the 52nd minute when he failed to intercept a ball across the six yard box and the ball hit Dempsey rather than the other way round and rolled into the empty net.

We made the call to go and get a final beer.  Perhaps we delayed our venture downstairs by a minute too long because “beer marshals” had been deployed to stop anyone new joining the queue.  I didn’t know whether to laugh or cry at the need to have such people.  I could rant on here about it is harder to buy a beer than a hand gun in some places but that’s not for this blog.

Turkey did get themselves a consolation goal in the 90th minute although to me the decision to award a clear penalty for handball on the line by Cameron summed up the ridiculous performance by the referee.  Since when has deliberate handball on the goal line not been a sending off offence?  Since when did the line “well, it is only a friendly” been a new FIFA rule?  Denying a goal scoring opportunity is still a straight red card offence, yet it seemed the referee either didn’t know the rules or couldn’t be arsed.  That probably explains why he was refereeing this game and not on the plane to Brazil.  Inan converted the spot kick but it was too little, too late.

The crowd headed out into the scorching New Jersey sunshine pretty happy.  Two wins in a week, with one more to come before the team headed down to Brazil with their heads held high where they will be facing the small matter of Germany, Portugal and up first Ghana in what is seen as the must win game.  Will they proceed from the group?  Well, compare it to England’s group of Italy, Costa Rica and Uruguay and I think they are on a par.  There shouldn’t be any shame in coming home with a positive result against one of the European giants and with Klinsmann at the helm, they may just have enough direction to just do that.