“You are going where?” That is the usual response I get from The Current Mrs Fuller when I float the idea of a weekend watching football somewhere. Of course I always offer that she can come with me but surprisingly she always declines. Normally I blame the trips on Danny but this one was all down to French Television. F’ing Pay TV. 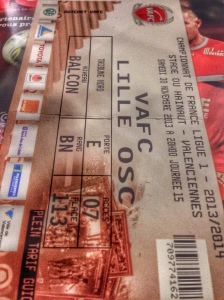 Despite having been to well over two hundred different grounds in Europe between us (probably – we don’t actually keep a record), and well over half of the current La Liga grounds, there has been one large gap in the list. Olympique Marseille, the Great OM. But we had a cunning plan to put that right. Our annual pre-Christmas trip this year was to be to the Mediterranean to watch Olympique take on Montpellier in the battle of the Cote D’Azur. Logistics were straight forward with tickets procured in the perfect spot to see the Ultras. After all, we weren’t really going to watch the football, were we?

And then it went wrong. Horribly wrong. Those underpaid, overworked, stressed French footballers announced they were going on strike in protest about the amount of tax they had to pay. They would be barricading the golf course/luxury car show rooms and country clubs with their camouflage Lamborghini until their demands were met. Our trip looked as if it would constitute one CFA2 game (think county league but with less dogs wearing scarves), lots of beer and buckets full of Bouillabaisse. And I hate fish stew.

Two weeks ago somewhere in their collective brains, the French footballers realised it wasn’t all about them, them, them. Someone told them about the fans, who week-in, week-out paid silly sums of money to watch them sweat for a few minutes and they decreed to cancel their planned action. We were back on! France was the best country in the world.

We were set, with just one small obstacle to get over. The French FA published their fixtures for the weekend and Marseille had been moved to Friday night. Around 12 hours AFTER we were due to arrive. Despite a Tuesday night Champions League game, the French FA thought this would be a great Friday night treat for everyone…apart Danny and me. We were screwed. Tickets, hotels, flights were all non-refundable. Thanks everyone. France was the worst country in the world.

Better men would have simply put it down to experience and given up, choosing on stand on the Jungle watching Lewes v Thamesmead Town when we should have been on the Virage Sud in Marseille. But that’s not we do. So within 24 hours Plan B was signed, sealed and delivered in triplicate to our respective wives. And for added value, Damon T, the brawn behind the Real FA Cup website agreed to come and hold our hands.

Not one, or even two but three (THREE) new grounds in one 24 hour shift across national borders including a couple of local derbies and it was a perfect substitute. OM’s loss would be Valenciennes, Aalst’s and Kortrijk’s gain. The only downside was the fact that we would have to drive there. And of course by we, I mean me. I seem to be in the minority within the footballing blogging/writing community in the fact that I can drive. I’m still positive it’s some kind of conspiracy against me. 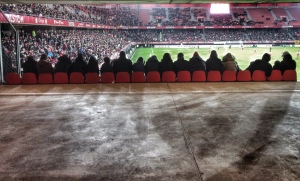 Fast forward to 5pm on Saturday and we are prepared for a big night out in Valenciennes. When people asked me where I was going and I said “Valenciennes” the immediate response is of course “Valencia? Spain?” That’s right, I’m driving to Spain. A three-minute history lesson later and they are none the wiser and the topic changes to the weather. But Valenciennes is a real, trust me. From our motel room we could see all the sights of the city – industrial units as far as the eye could see. After a thirty minute wait in the closed motel bar a taxi finally arrived and was soon stuck in a traffic jam that seemed to stretch to Paris.

Finally we made it through the Saturday evening traffic and we arrived at Stade du Hainaut. We still had enough time for some Leffe Ruby and a big bag of chips with Hannibal sauce (Hannibal and his elephants obviously created Coronation sauce). Two of the three vital elements of an EFW sated, it was time to sample some the third – Le Foot.

Valenciennes are enjoying one of their longest stints in the top-level of French football after promotion in 2006.  They are one of a few teams in France who could really class themselves as “mid-table”.  Their noisy fans haven’t had much to cheer about in their history with just one appearance some sixty years ago in the Coup de France and still awaiting their first European adventure.  With a brand-spanking new stadium the infrastructure is now in place for the club and Les Athenian fans will be hoping that one day soon they will have something to cheer.

The visitors, on the other hand, are enjoying a fair share of the limelight in the French game.  Under coach Rudi Garcia, who has now departed to spin his magic at AS Roma, Les Doges won a domestic double in 2011/12 and followed it up with another Champions League appearance this year.  Coming into this game they were desperately trying to fight off the billions of AS Monaco for a place in the top two with Paris Saint Germain.

Despite being the nearest Liga 1 club to Valenciennes, Lille OSC fans have never seen this game as a “derby”. To them they are keeping their powder dry for the eventual return of Racing Club Lens to the top table. In fact, many of the hardcore fans couldn’t be arsed to make the journey down the A23 for the game.

There are three things that you need to be prepared for before you enter the ultra-new, ultra-modern Stade du Hainaut. Number One – it is very very red indeed. 25,000 red seats, a red roof and red lighting is a tad over the top and shouldn’t be experienced with a hangover or if you are taking and hallucinogenic substances. Number Two – like other French stadiums, no alcohol is served in the ground. Beer is over-priced and sans fun. And finally, Number Three – the concept of hatching is alien to the French. There was an imaginary line where you could stand behind at the back of the stands, but woe-betide anyone who stepped one inch over that line. Stewards marched back and forth, verbally berating anyone who was too forward. Damon tried to reason with them, explaining to them the notion of stripped lines on the concrete but they just shrugged their shoulders “in that way”.

The Valenciennes fans tried to make some noise to drown out the LOSC fans. Despite being small in number, they were big in voice which at least took our minds off a game that failed to live up to the pre-match billing of “North France’s biggest derby”.

There was no surprise that the game was decided by one goal, although in truth it was quite a surprise that either team got close to actually threatening the goal. If this was played on a Saturday afternoon in England it would be fighting Stoke City for the last game on Match of the Day. So here goes with the highlights.

Kick-off. Half-time. Kick-off, Lille score, go down to 10 men when Béira is sent off for a second yellow. Full-time. Four shots on target, a few corners and far too many niggly fouls.  I bet the highlights DVD will be a best seller this Christmas. The win moved LOSC back into second place, after Monaco had briefly taken that spot earlier in the day. However, with the fire-power of Zlatan and Cavani and the billions of the Qatar Investment Authority, it would seem that Paris Saint Germain will be hard to beat if they don’t get distracted by the Champions League. 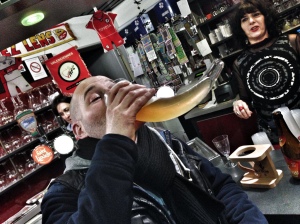 So what to do on a night out in Valenciennes? We went in with low expectations but eventually returned back to our small motel room at some point after 3am. Quite was transpired in the intervening five hours is still a bit of a mystery. We started in the Ultras bar, drinking beer out of a glass horn with Ronaldo’s body double and it ended in a night club with Danny wandering around singing “I wanna dance with somebody”. In between we spent an hour or so in a bar where everyone bar us was dressed as Superheroes. Just an average EFW night out.

Saturday was history. Sunday promised to be the Best. Day, Ever.