The Daggers Diary team head up the M1 to see what is going on at Northampton when Coventry are at “home”.

When it was announced during the summer that Coventry would be playing home games at Northampton, it was almost a given that we would try to attend. As the fixtures had already been announced, many of the games would be played on a Sunday, which also meant that it wouldn’t clash with our Daggers fixtures.

Of course, we waited to see what kind of attendance would be at the first game against Bristol City, before we could gauge what kind of crowds the club would be attracting, but the two thousand or so that paid to go in meant that we wouldn’t have too much trouble getting tickets. 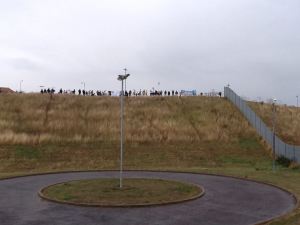 There is though, a moral issue to be confronted about this. From an outsiders point of view, the whole thing is a minefield of opinion, what’s correct and what isn’t. From what I can understand of the whole issue, the point is that the owners of the club, SISU, won’t pay the rent on the Ricoh Arena, which is owned by a separate company, and it is this that has precipitated the move from the city of Coventry. There have also been two periods of administration, and you then have a club that has been in a right old mess in the last ten years.

It was late in the day that the Football League sanctioned the move but, and I may be wrong here, but does this have some of the hallmarks of when Wimbledon were allowed to move to Milton Keynes? I know that there is an agreement in place whereby the club have to be back in Coventry in three years time, but is there any chance that this will happen? Allowing a club to move out of the place that it represents is never a good move. It took Charlton six years to get back to their home town, Brighton took a couple of years (at Gillingham) to get back home, eventually pitching up at the Withdean and Rotherham spent some time at the soon to be demolished Don Valley Stadium in Sheffield before eventually getting back to town, just a few hundred yards along to road from the their original home.

Wimbledon are clearly the obvious example in all this though. Leaving Plough Lane, they moved to Selhurst Park in 1991, and never moved back to their home borough, eventually leaving London altogether in 2004 for the trip up to Buckinghamshire. It took a reformed club to eventually revive the Wimbledon name, and it is to be hoped that Coventry City are playing within the city of Coventry soon.

We arrive at the stadium about two hours before kick off, and the clouds are building in a very real sense over the stadium. Having left the car in one of the many car parks dotted around the stadium, we head off to the local branch of the golden arches. The rain starts to fall heavily while we eat, and once finished we shelter outside before it subsides enough for us to make the walk across the road to the stadium.

There are already a few standing in the rain on the hill behind the stadium. They have their umbrella’s up and at least the food they have bought with them is covered, in the small pink tent that doesn’t look like it’s actually anchored to the ground.

While there aren’t many outside at this point, there are more on the way, and as we stand at the back of the North Stand, we peer round the back to see what looks suspiciously like a scene from Zulu dawn, with silhouetted figures standing on the top of the hill. If we start to hear a war cry from them, then we are all in trouble, although the rain has made the slope slippery, so we might see a few fall before they reach the bottom.

It must be difficult for the players to concentrate for the game when there is this kind of turmoil at their club, but if there is any problems with the players, then they don’t show it, and that is to the credit of them, and the team management as well. At the end of their warm up session prior to the game, they applaud the fans inside the ground, and look as though they are doing the same to those who are outside, on the hill.

The home team start the game slightly nervy, and Colchester look like a side placed towards the top of the division. The early pressure is not though a sign of things to come, and Coventry gradually gain the upper hand.

The impressive Cyrus Christie is rampaging down the right wing and causing all kinds of problems for the opposing left back, Ryan Dickson, who is replaced less than twenty minutes into the game. As soon as he leaves the field of play, he heads straight to the tunnel, much to the delight of the home fans seated around the dug outs. Christie has already provided a cross for the also impressive Callum Wilson, but his header is wayward. Sam Walker, who is on loan to the club from Chelsea, stops efforts from Wilson and Leon Clarke, but can do nothing about another effort from Wilson; luckily on this occasion, the post comes to his rescue.

Coventry finally make the breakthrough eight minutes before the interval. Blair Adams is allowed to advance from his left back position, and shoot; Walker is able to save this, but not retain the ball, which breaks loose. On hand is Wilson, who rolls the ball into the net, despite the recovering Walker trying to get to the shot. It is no more than the home team deserve, as they have been dominant since the opening few minutes.

The score stays at 1-0 when the half finishes, and the crowd outside the stadium moves along the hill so that they can get a better view of the second half, when the home team will be attacking the north stand. Even at this stage, if Coventry can play as well as they have done, they should win this game well.

The teams re-emerge for the second half, and as they line up, one of the assistant officials attracts the attention of the referee. There is a problem with the net that Coventry will be attacking, and despite the efforts of the clearly not tall enough linesman, and Sam Walker, the problem persists. Eventually one of the groundstaff emerges, and although they don’t look tall enough either, the problem is resolved within a couple of minutes, and we can finally get the game restarted.

Clinton Morrison is now on for Colchester, and while they look slightly better, there still isn’t really enough of a threat being offered by the visitors.

Therefore, it’s not much of a surprise when Coventry increase their lead just before an hour has been played. Callum Wilson is the scorer again, having been played through, and then rounding the goalkeeper. It tops an impressive display from the forward, and Coventry already have the game tied up, with half an hour left to play.

The rest of the game is fairly uneventful. There are the remaining substitutions, with the home team making theirs in the last ten minutes, replacing Baker, Wilson and Moussa, but it barely makes any difference in the game. While changing players means that the home attacking threat has been diluted, Colchester offer so little going forward that it makes no difference.

There is though the crowd that is still outside the stadium, and the drum can clearly be heard when those inside go quiet, with the “Sky Blue Army” chant also being audible. What those going to the cinema or to the shops nearby must make of it, I can only speculate, but it clearly takes commitment to the cause to make the journey and then to continue their stand.

Coventry see out the game, and are comfortable 2-0 winners. There are a few comments from upon high as we leave the stadium, but this is a difficult situation for supporters, and as we head back to the car, we can only imagine what those of Coventry City are going through. They have seen their team ripped from their city, and are now playing thirty-odd miles away in a stadium that is not their own. At the highest levels of the game, fan protests can take the form of boycotting games, but others will come along and fill the gaps. Those at the highest levels of the game know this, and continue to do what they do.

At the lower levels though, a boycott will mean a drop in attendances, which is clearly the case here. It is a difficult decision to make; do you support the team and pay your money, despite the fact that you really don’t want to be supporting a group you don’t want in charge of your club, or do you withhold that money, and miss the games? It is a situation that I wouldn’t want to go through with my team, and I can certainly sympathize with those Sky Blue fans that are going through this conundrum on a regular basis.

On the pitch though, it does look good, and this win means that Coventry have wiped out the ten point deduction imposed on them at the start of the campaign. Clearly there are tough games to come, and they will find that not all will be as poor as Colchester were today. But providing that Carl Baker continues to put as much effort as he did today, and that Wilson and Clarke get the goals, I would not be surprised to see Coventry at least make the play offs.