In the autumn of 2011 Philosophy Football met Honey Thalijeh, then captain of the Palestine Women’s Football team. Inspired by what she told us about what football meant to her country we promised that when Euro 2013 opened in Israel we would be in Palestine. 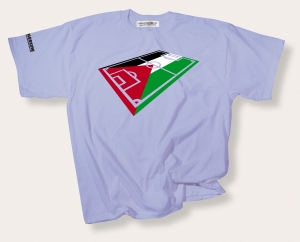 But on the other side of the wall Israel built football is played and watched in Palestine under the most abnormal of conditions. Massive restrictions of movement, 24 hour surveillance and illegal settlements and land grabs, yet on the football pitch, as recognised by FIFA, Palestine plays football as a nation.

Throughout the tournament Israel will do everything it can to keep attention away from football on the Palestinian side of the wall. Our film, shot over the past few days will help to break this silence. On Tuesday it was premiered in Ramallah at the HQ of the Palestine Olympic Association and simultaneously released on YouTube.

Today Philosophy Football also launches our Palestine Football Supporters Club T-shirt for a game with no borders, no walls. JUST £17.99 – £5 OFF – For the opening week of the Tournament, usual price £22.99. Sizes S-XXL and womens’ fitted. Available from Philosophy Football here.

The shirt has been produced to popularise the cause of Palestinian football. Sales will fund this first film and future initiatives of this sort