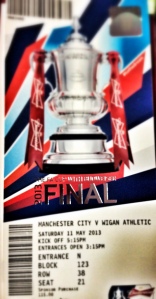 I don’t think there is anyone over the age of 35 who does not lament the coverage of the FA Cup final of yestayear. Whilst technological advances in the way we watch the game have improved stratospherically, the sheer level of live football saturation on our TV screens means that today’s showpiece event is simply “just another live game on TV”.  The fact that it has been shifted from the traditional 3pm kick off to a 5:15pm peak “coming home from a day of shopping and now finished the chores” timeslot further degrades the heritage and tradition of the world’s oldest and most watched cup competition.

Having spent a number of FA Cup Final days in Europe I can testify to the high standing the rest of the continent has for the competition.  I have even been to an FA Cup final house party in Copenhagen once, where someone even turned up dressed as an FA Cup such was their passion for the event.  He had however consumed the best part of a twelve-pack of Carlsberg Black before he arrived and so his behaviour should probably be classed in the “drunken mistake” pile.

Richmond Red mentioned on Twitter yesterday that he can barely remember Stoke City being in a cup final or what the score was, despite the fact it was just two seasons ago.  Yet I can tell you the referee who sent off Kevin Moran back in 1985, the confusion as to who really scored the Arsenal opening goal versus Manchester United in 1979 and Steve McKenzie’s forgotten wonder goal in the Ricky Villa final in 1981.

So what in particular do we miss?  Well how about a trip down memory lane to when FA Cup finals were the biggest days in the footballing calendar.

1. Buying the official programme from WH Smiths – During the week before the game, I used to wait by the front door as my Dad came home from work, hoping he had been to Smiths and bought a copy. You couldn’t watch the game properly unless you had that by your side.  The programmes were works of art, with adverts for David Stacey Football Programmes, Zetters Pools and of course, Rainham Steel.  Twenty five years ago a Cup Final programme would cost you £2 and would be full of information that few people had read elsewhere .  Today it is a cool £10 and contains content that can be found with a simple search on Google.

2. The Road to Wembley – With so little football covered by the TV cameras twenty five years ago, the Road to Wembley was a hit or miss affair.  When West Ham reached Wembley in 1980, the only goals they could show in the pre-match show were from the semi-final.  Nobody expected a middle of the table Second Division side to reach the quarter-finals, and with only three TV cameras in existence, or so it seemed, their games were never recorded and so the last minute drama of a contentious hand ball in the quarter final against Aston Villa has never been seen by anyone outside the 36,000 who were present at Upton Park on that March day.  Today every game and every goal from virtually every game played in the cup is captured somewhere by someone.  If an amusing or contentious issue occurs, be sure that someone will be uploading it onto YouTube within minutes.  So whilst the Road to Wembley now is more like an Autobahn, we still yearn for the shaky amateur content from a country lane of a way to Wembley.

3. Cup Final TV specials – Up until 1987 you could tune into ITV on Cup Final day and watch a FA Cup Wrestling special.  The last of these, held in Bedworth, saw Giant Haystacks representing Tottenham Hotspur taking on all-comers including including Paddy Roach, aka Bomber from Auf Wiedersehen Pet.  Cup Final It’s a Knockout was a firm favourite, although for obvious reasons we can no longer talk about that show.  I remember an ITV equivalant of a Krypton Factor special.  BBC went for the more high-brow approach with Cup Final Mastermind in response to a Coronation Street special when Manchester United got to the final in 1979.  Coverage used to start at 8am on both channels and with our trusted Radio and TV Times (at the time the former only had coverage of the BBC channels) at our side, we swapped channels to our hearts content.

And then of course there was the journey to Wembley itself on the team coach, with Stan Boardman/Frank Carson/Jimmy Tarbuck/Little and Large on board.  Cue jokes that the editing team at BBC/ITV rushed to censor before Mary Whitehouse would be outraged and Colonel Spriggett would write to Points of View.  These were the days when the comedians were bigger names than the players.  Now, most Premier League players can hire a top comedian for a private gig for the night and still have change for a limo fare home from a full day’s pay.

4. The official FA Cup final records being “performed” on Top of the Pops – It was an unwritten law that both teams had to record a song for the FA Cup Final, and irrespective of its quality and where it was in the charts it was always shown on Top of the Pops on the Thursday before the Cup Final.  Some of the songs were truly awful (Oh Millwall 2004, Hot Stuff from Arsenal in 2008 and Move Move Move from Manchester United in 1996), some were just dull (Blue is the Colour, You Never Walk Alone) and those that could only be football related (Ossie’s Dream and Anfield Rap)…oh and of course Bubbles…possibly the greatest football song ever, performed on both the 1975, 1980 and 2006 (probably). 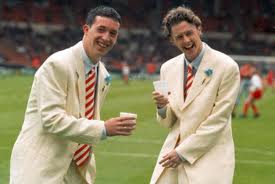 5. The appalling dress sense of the bench – The 1973 Cup Final will be remembered for Ian Poterfield’s goal and Jim Montgomery’s amazing save.  But what about Bob Stokoe’s flasher mac and pork pie hat?  He led the teams out in a snazzy red tracksuit, then disappeared behind the bench to get all tarted up to meet the Queen.  Or Don Revie in his dark sheepskin coat, with a blanket close at hand for his chilly legs?  In the 80’s we of course had Brighton & Hove Albion arriving at Wembley by helicopter, sporting white (white!) shoes, and then the biggest faux pas of all, Liverpool’s white suits in 1996. Today, it’s all classic Hugo Boss single breasted suits and matching ties and button holes.

But actually, what we really want is a final that both teams can win.  Unfortunately nowadays the gulf between the top three (sorry Arsenal and Spurs fans) and the rest is so great that if they get to the final, you simply wouldn’t back against them.  And that, in my opinion, is the biggest problem.  Yes, we can complain about the sponsorship of the competition, the semi-finals being played at Wembley, the outrageous ticket prices, the kick off times and the fact it is played on the same day as Premier League games. but give us the prospect of David beating Goliath and it becomes the best competition in the world….I mean who really gave Wigan Athletic a chance….the magic of the FA Cup is back and long may it stay.