History?  You want history?  What about the mighty Barca crashing out of the Champions League after a humiliating lesson in football in Milan?  That was sure to be on the cards as Dagger’s Diary Brian headed off to the Camp Nou on Tuesday…..

This trip represents a couple of firsts for me. It’s my first midweek trip to Barcelona, and also my first Champions League game here. While Dagenham Dan will be at the Daggers game against Torquay, I am here on a solo trip for the first knock out round game against Milan.

Barcelona are going through a bit of a wobble at the moment. A 0-2 first leg defeat at the Guiseppe Meazza three weeks ago has left them with a rather large challenge tonight, in order to progress. If that wasn’t enough, a league defeat at Real Madrid (coupled with a cup defeat to the same opposition) has reduced the lead at the top of the league.

Of course, even the best teams can have a bad run of form. The Milan defeat has been put down to just an off-night for the side, but the drop in form has also come along at the same time that the coach, Tito Vilanova has been in New York, recovering from cancer surgery. While those who have stepped up to lead the team are obviously giving it everything, the loss of the team leader is clearly having a negative effect on the club. While the president has said that the health of Vilanova is the main priority for the season, losing such a lead in the division, as well as the Cup and an early exit in the Champions League would mean that, in a world that demands success ever more impatiently, no trophies would signify failure, no matter what the moral issues of the time. 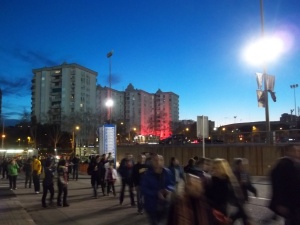 Recent performances have not quite reached the high standards of the last few years, coupled with the results. Not keeping a clean sheet in the last twelve games signals a problem in defence, and the reliance on Lionel Messi for goals suggests a rebuilding exercise for the club in the very near future. However, Messi, Puyol and Xavi have all recently signed contract extensions, which should keep the side together for the next few years at least.

This game against Milan though is one that, even at this stage, will go some way to defining the club’s season. If they can succeed tonight, then the resultant boost from recovering such a negative position should provide enough to get league campaign back on track. Defeat, and the nervous looks over the shoulder at the approaching Atletico and Real Madrid might just turn the last couple of months into nerve fest which Vilanova might not appreciate, especially given the health scares of the last few months.

With Easyjet now flying from Southend, it’s much easier to get here than traipsing into London, before getting the train down to Gatwick. Flying out of City Airport in Docklands has been getting more expensive recently, so this is perfect.

There is a bitterly cold wind and a light dusting of snow on the ground as the bus proceeds into Romford, for the train to Southend Airport. There is a few minutes delay on each of the journeys (which includes a change at Shenfield), but the further east the train goes, the more snow there is. By the time we get to the journeys end, there is at least an inch of snow on the platform.

With only three departure gates, it is a small airport. Having arrived with plenty of time to spare, there isn’t much to do, and so the kindle is used for the first time on the trip.

With little to do, any delays aren’t going to be a good thing. The flight to Barcelona is delayed by twenty minutes, but those going to Alicante have two hours to wait. As they are asked to come forward for their food voucher for the delay, another hour is then added on to the delay. The one cafe in the terminal is nice and busy as we are herded through to board our aircraft. The sun is shining as we walk out to the airplane; as clumps of snow fall from the roof, there are a few Barca shirts and scarves on view, as well as Milan.

The flight is fine, and landing in Barcelona just after 2pm, it is nice to walk off the plane not needing to wear a coat. It seems that there are quite a few heading to the game, and as we wait to disembark, five of us start discussing the forthcoming events.

I’ve already caused enough problems at the Camp Nou ticket office this season. Back in January, when visiting for the Derby game against Espanyol, I asked them for my ticket a whole two months early. After getting the correct printer set up, they did it, but the staff didn’t look too happy. So while my fellow passengers all head to the stadium, I catch the bus to the city centre.

There are lots of police around, and so I head straight for lunch. It’s a nice sunny afternoon, and there is more than enough room in my bag to put my coat in.

After eating and a bit if a stroll, I head out to the hotel, to check in and deposit my bag, before heading out to the stadium, for a quick look around in the store. I am always amazed at the cost of everything, but I almost always end up buying something anyway. This time, and despite several tempting items, the credit card stays firmly in the wallet.

I have enough time to go back to the hotel, watch some television before walking back to the stadium at about 7. With the gates not opening until ninety minutes before kick off, there are queues at all of the gates to get into the complex. As I wait at my particular gate, a group of Milan supporters at a nearby bar have ignited a red flare, bathing the building in an almost demonic glow, while singing their songs. A passing Barca group respond with the Barcelona club anthem, and as we wait to go in, the police nearby don’t take their eyes off the red walls.

The gates are opened and the masses start to stream in, past the television trucks in the car park, and past those who will be providing the analysis on ITV. It surprised me somewhat to see so many travelling over for the game, but to see Roy Keane, Andy Townsend et al wandering through the car park just made it all seem that little bit madder. Apparently we were also graced by the presence of Avram Grant on the flight out, although I’m not sure how many really cared.

Although I got some comments and was asked why I was travelling when the game was already going to be shown on the television, when the final whistle sounded at just after 10.30pm local time, I’d like to think the answer was already clear.

I’ve been lucky enough to go to the Camp Nou on a dozen occasions, and this was by far the best atmosphere I’ve experienced at the ground. The Milan fans perched high up in the third tier were brilliant before the game, but as the tie turned against them, they did get quieter as you might expect. I have mentioned before on here that the noise levels sometimes leave a bit to be desired here, but not tonight. There was noise from all around the giant cavernous bowl, and when Milan had some possession in the second half, the level of whistling from the home fans was such that it left me with a minor headache.

I can’t recall a more one sided first half, certainly not at this level. It seemed as though Milan only got the ball out of their own half when they hit the post, or when they were restarting. Prior to the game there had been doubts about the home side, but it was almost like the team of old, hunting down the opposition, and not giving them any time on the ball.

There is the often repeated mantra of having to recover the ball within six seconds of losing it, but it just looked as though they had decided to cut that down even more.

Having to recover a two goal deficit was always going to be tough, and likely to give Milan some chances, but in the main, the ball just seemed to be always in the possession of a red and blue shirt, and always heading towards the Milan goal. Barca more than have the measure of their visitors in the first half, and Milan aren’t much of an attacking threat. Whether Milan have sat back, hoping to repeat what Inter did here in 2010 is not entirely clear, but they are giving the ball away a lot, and also they just can’t keep hold of it for too long either, as Barcelona just hunt them down and recover it really quickly. The right flank, where Dani Alves is seemingly continuously in an advanced position, is particularly fruitful, and Milan don’t get close to him at all. When they try in the second half, Jordi Alba is more threatening on the other side.

Following Lionel Messi’s two goals in the first half, Milan couldn’t afford to be as bad again, and they weren’t. There were a few anxious moments, especially after the hard working David Villa scored the third. With a Jordi Alba block denying Robinho late on, those whistling knew that one away goal would be enough to send Milan through. That it didn’t arrive was fortunate, but the late fourth from Alba completed a fantastic night. It’s worth noting that very few had left before the end, and when the referee ended the game, the Barca anthem rang out with almost a full stadium singing along.

Walking back around the stadium on Wednesday morning was a strange experience. Not so much the actual walk, as I’ve done that on more than one occasion, but more that, less than twelve hours before, it had been occupied by a mass of people all present at a sporting event that will be recalled for years to come. Three quarters of the way round, just passing the famed La Masia building, the rain starts. I have enough time to get my coat from my bag, before it gets heavier.

By the time I have started my walk around the Gothic Quarter, it is tipping down. There are people wandering around, trying to sell umbrellas to anyone that looks like a drowned rat, but as I am already soaked through, I don’t bother. I head back to the airport bus stops earlier than planned, but as the bus ploughs on through the rain, this has been an excellent, if short trip. I’ve always enjoyed my trips out here, but this has taken it to a whole new level. On Saturday, the Daggers are at home to Burton, but at the moment, I’m not too fussed by that. I just want to enjoy this one a little bit longer.