Let’s face it, none of us want to watch football in the sterile environment that sums up the experience that is far too common in England these days. The all seater stadium, lack of signing, banners and organised fan displays is the complete opposite to the marketing blurb that tells us that the Premier League is the best in the world. Apart from a few instances such as Crystal Palace’s Holmesdale Enders, the atmosphere in our grounds is not comparable with most of our European rivals.

In the past twelve months we have wandered far and wide across the world, sampling some of the best and most hostile atmospheres. Whilst there are plenty more examples of red hot atmospheres, these are the ones that we personally experienced. Last year the clear winners were Legia Warsaw and the wall of noise they put up every week at the Pepsi Arena. But the club and the ultras have fallen out this year, leading to a boycott of the home games. But we have found three teams/matches where you simply cannot be beaten. 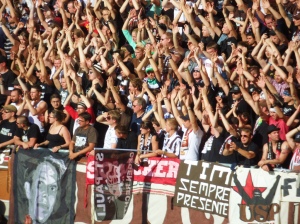 Amazingly we had never experienced a St Pauli game home or away until this year when we went and saw them play at Paderborn. Despite the game being at lunchtime on a Sunday, and a fair distance away from Hamburg, they sold out their end three times over. The noise they produced through the whole ninety minutes was outstanding, especially as the temperature in the ground probably topped 90 degrees. Whilst the St Pauli fans like to think of themselves as alternative, their support was nothing short of Premier League. 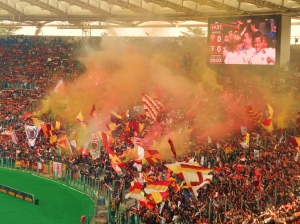 This was a real difficult one to choose. Our top two were neck and neck in terms of passion, noise and colour. But our one disappointment for the Rome derby was the stadium wasn’t full. Both Curve’s were rammed though, and it was very difficult to know which end to look at when they were in full flow. Pyrotechnics galore, banners poking fun at the opposition and of course flags. Lots and lots of flags. Book your flights now, it is unmissable.

To get more flavour from the game head on over to our Flickr page. 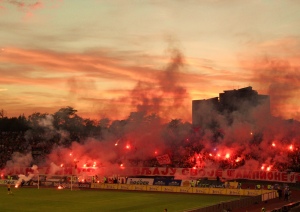 More and more people are venturing to Serbia to experience this game, which is up there with the most atmospheric in the world. Despite the stadium being 99% open air, the noise is unbelievable, the banners huge and the flares, well, have a look for yourself. Even standing in the side stand you are engulfed in smoke as old me join in with the youngsters in lighting up to full effect. Despite Partizan already crowned as champions, Red Star didn’t want to be out done here and towards the end of the game started setting fire to the seats. Oh, and tickets cost about a pound if you are lucky enough to get one.

Want some more? Have a look at these snaps then.