Wednesday 20th February 2009. That’s a date I will never forget. Toothache can strike at any time, but when it starts suddenly whilst on a high-speed train cutting through the barren lands of Castilla La Mancha in Spain you really are stuffed. No access to a dentist there, no pharmacies selling painkillers and none of those old fashion door handles where you can loop a shoelace around to yank the offending tooth out with.

I was heading to Andalusia, Seville to be more precise, to watch England take on European Champions and World Cup favourites, Spain. It was also the last time I would travel to watch England abroad I had decided. I had grown weary of the endless suspicion, the security checks, the hassle of travelling abroad following a team involves. I’d also got fed up of the way our own FA had been running the game at all levels for years so just decided to give it up. The toothache, whilst I can never blame John Terry personally for my current condition, was the last straw. Away trips couldn’t get any worse, could they?

There had been good times. Representing (and managing) my country in Macedonia as the England Fans Veterans XI lost 5-1 to a team LIVE on Balkan TV who would later that same season qualify for the then UEFA Cup. Of course Germany 2006 was probably the pinnacle for most fans. It couldn’t get any better than that. And it didn’t. Zagreb in October 2006 was a nightmare – poorly organised, terribly treated and an awful performance. Paying the best part of £500 to go on a day trip to Tel Aviv to watch one of the dullest games of football ever didn’t help my mood either. For every Minsk there was a Barcelona, Berlin a Moscow. Slowly the other fans I used to travel with also started giving it up. Rob the Red, Paul Knight and even Dagenham Dan. When he gives something football related up you know it’s time to re-assess the future.

I saw the game last year in Copenhagen but that doesn’t really count as a) I was in the press section and b) I was living a 15 minute walk away from Parken at the time. Oh no, come renewal time in July I kept the cheque book in the drawer.

But then a little voice in that same drawer started talking to me. “Mmmmm…new stadium in Warsaw. Shiny and new. Stockholm…the new Friends Arena. Just a goal kick away from the office – you have to go there to do some training. And Airmiles. You have thousands of them. Hundreds of thousands…waiting to use on venues like, well Warsaw and Stockholm to start.” And then the email arrived…”It’s still not too late to be cheering on Roy’s Boys in the new National Stadium in Warsaw.” I swear that the email had hidden HTML subliminal advertising because before I knew I had paid my £70 renewal fee, booked my flights and dug out my Zloty’s. Time to broach the subject with CMF – extra special petrol station flowers for this one I felt.

She of course asked the one question that I couldn’t really answer. “Why?”. I couldn’t really say because of the Airmiles as she had given me a list of places she wanted to go that amazingly always seemed to be unavailable when I checked with BA. I couldn’t even say it was because of new cultures, new cities and new experiences – I went to Warsaw twice in 2011 and go to Stockholm for work at least every other month. I had to fess up that I was simply going for the new stadiums. Is that shallow? Who cares – I was going and all those doubters weren’t.

Poland has gone through a massive regeneration. On my first visit in 2006 it was very grey, people looked miserable and the football stadiums were grim. Fast forward to my trip with Mr. Last last December. We stayed in a 5-star hotel in Warsaw for less than £50, drank (a little too much perhaps) beer in some fantastic bars and the locals were very pleased to see us. We travelled first class across the country, sharing a carriage with the Italian Ambassador to Poland no less who was equally impressed with how the ugly duckling of Polksa had grown up into the beautiful white swan of Poland. The country had got EuroFever.

England, of course, were hardly strangers to Poland. It seems that rarely a qualifying tournament goes by without us being drawn together. However, after hosting such an excellent European Championships, there was an air of confidence wafting across Warsaw as I landed at Chopin airport. My taxi driver tried to explain how Waldemar Fornalik would line his side up against The Three Lions, concentrating more on the overlapping runs of Grzegorz Wojtkowiak than the pedestrians crossing the road into the city centre. 2-0 Poland was his parting shot to me.

Last Friday England had beaten San Marino 5-0. I didn’t see the game. I didn’t even see a report of the game or the goals on TV. It was CMF’s birthday and so after a very pleasant night out watching Matilda, we headed off to Brugge for the weekend. All of my comments so far may lead you to think I’m anti-England. Nothing could be further from the truth. I just wish I didn’t have to feign interest in certain aspects. I’m not and never will be “England ’til I die”. I want to see a national side that inspires, plays good football and makes people proud to say I’m an England fan. The thought of Ashely Cole being lauded for reaching 100 caps leaves a bad taste in my mouth. Here’s someone who sums up what a modern footballer should not be in one small, spiteful package. Thankfully, the other “Toxic Twin” retired from international football just before the FA banned him. Even then they showed no consistency after the Suarez case last year. But that’s the FA – afraid of confronting the problems at the top-level of the game, yet happy to ignore the plight at grass-roots level (hello FA cup sponsorship money for Grass Roots football).

This game would certainly be a test more for the Poles than England. After two years of friendlies in the build up to Euro2012, the White Eagles came into the tournament in some confusion as to how good they really were. Three games later the national team confirmed what many thought – that by the third week of the tournament they’d all be watching the games on TV. Drawn in a qualifying group for Brazil 2014 along with fellow co-hosts Ukraine, Moldova, San Marino, Montenegro and England, on paper they would fancy a shot at runners-ups and ultimately a play-off spot. So far whilst England could boast 7 points from their opening three games, Poland sat in 3rd, and could technically top the group with a four goal win. But that wasn’t going to happen. The powers above had a different plan for the evening.

Apart from the McLaren years, England’s qualifying form for major championships has been nothing short of outstanding. Rarely are they troubled on their travels whilst away from Wembley; they may not always entertain, but they constantly deliver. So what could possibly go wrong in Warsaw? 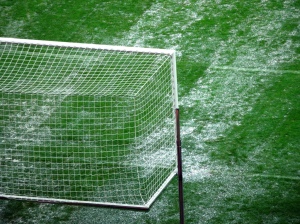 Well how about the plans (and finances) of thousands of fans being adversely affected by one single person? I refrain from swearing on this website for the sake of offending my younger audience but on this occasion I will make an exception. What fucking fucker decided not to fucking close the fucking roof of this fucking stadium when the fucking weather forecast was for fucking rain ALL day? Yesterday both teams were consulted as to whether to close the roof. Not armed with a forecast that said it would be raining in biblical proportions all day, they said no. But surely someone had some sense to reverse this decision when it started pissing down on Tuesday morning.

At 7pm as I trudged through the streets of Warsaw looking for my hotel I started questioning whether the game would go ahead. But then I remembered the ingenious fold-away roof the stadium had. After all, the Polish FA wouldn’t want the embarrassment of a postponement on their hands.

At 8pm my ticket finally disintegrated as I handed it over. “No problem – game will be off” said the steward on the gate. As I reached my seat and looked down at the pools of water it was obvious there was no way we would be seeing any action on the pitch. For the next hour we saw highlights of the Euro2012 SIX times, accompanied by the whole back catalogue of Coldplay. Wasn’t the rain punishment enough? Ironically, the roof couldn’t now be opened as it was raining too hard.

Updates from back home suggested the game wouldn’t go ahead. The 9pm kick off time came and went and there was no sign of any players or officials. Bizarrely, no efforts were being made to clear water from the pitch, yet the rain continued to hammer down. At 9.15pm the referee and his assistant made an appearance to a chorus of whistles from the frustrated crowd. Their attempts to make the ball roll on the pitch were observed by a thoroughly soaked Roy Hodgson. Pitch unplayable…..although for some reason an announcement was made to delay the decision for another 30 minutes.

Hmmm…what to do to amuse the crowd? I know, said the stadium announcer, I will put some more Coldplay on. Yay – that will cheer them all up. But in the madness came a ray of light. A pitch invader from the Polish section who managed to run the length of the pitch before a perfect sliding dive in the penalty area. Stuart Hall would have been in raptures commentating on that.

At 9.45 came another inspection. This one lasted all of 10 seconds yet an official announcement wasn’t made for over 30 minutes – by which time we had all had texts from back home saying the game was off and would be replayed at 5pm on Wednesday – just when most fans would be back home (over 60% were on day trips). I should add by this point my line of communication had collapsed. iPhones are not immune to wet pockets it seemed. This trip was already up there as one to forget with the abcess in Spain.

I have no idea how they would re-ticket the game. Few fans had anything left apart from a mush of, well, mushness. But the frantic race for most fans to rebook flights and hotels was already underway. The additional cost would have to be borne by the fans.

So possibly the worst ever away trip came to an end with a flight back to the UK with our favourites Ryanair. I’d personally like to thank that one individual who decided to not press that button which closes the roof. Thanks to that idiot I wasted 1 1/2 days annual leave, about £150 and now need to replace my iPhone. If there is any justice in the world they will be fired, or made to personally apologise to all those fans who had to miss the re-arranged game because they couldn’t change their travel plans. But they won’t will they? After all, they are part of the football family and will probably find themselves promoted to work at UEFA or FIFA in ticket arrangements for the next tournament.

So I think I would take toothache over being soaked to the skin, attending a game that would not take place and then ruining my iPhone. And I still blame John Terry.