Today was a day for sunglasses. Not that I would say it was a late (late, late) night in the fleshpots of downtown Düsseldorf, nor the fact that temperatures were going to hit the big 4-0 later on. The main reason was that we were heading westwards to the town of Aachen, where the New Tivoli was our venue. The new home of Alemannia Aachen is one of the finest new-style stadiums in Germany (and there a quite a few), but its most notable feature is its yellow seats. Bright yellow seats…..nearly 25,000 of them. 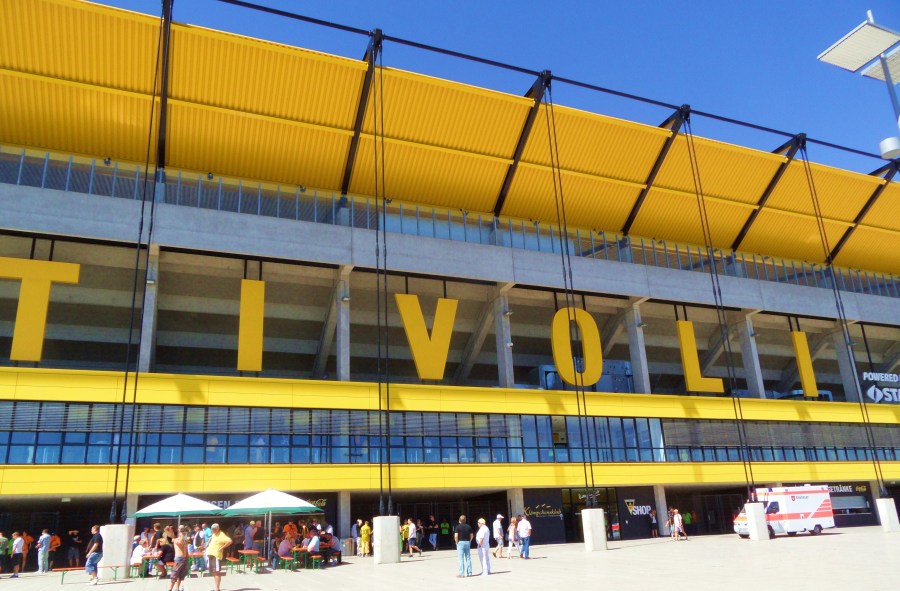 Our journey had the word problem written all over it. A train ride from Düsseldorf to Aachen, skirting close to the Dutch border doesn’t sound like anymore difficult than a normal daily commute (well, setting aside the fact that I have to negotiate the joys of service SouthEastern-style). But add in the fact that our journey would take us via Mönchengladbach and you have a receipe for carnage. Borussia Mönchengladbach would be making the 30 minute journey to Aachen for their first game of the new season, a season where optimism hasn’t been as high for well over a decade.

Differing fortunes is a simple way to describe the current situation of the two clubs. After a spell in the Bundesliga for a few seasons, Aachen celebrated the opening of their new stadium by getting themselves relegated, not just once, but twice to the Bundesliga 3. They aren’t the only big team now competing at this level. They will renew acquaintances this year with the likes of Hansa Rostock and Karlsruher SC in a situation similar to the nPower League One last year when the likes of Sheffield United, Wednesday, Charlton Athletic and Stevenage locked horns.

Borussia Mönchengladbach, once a regular in the latter stages of European competition have gone through the “punching below their weight” for a number of years. In a similar situation to Aachen, their recent brushes with relegation coincided with a move to their impressive Borussia Park stadium. The fans, in my view, some of the most passionate in Europe, now have a sense of optimism. Last season they started as one of the favourites for relegation, a fact borne out by the betting offers at the time but ended up in the Champions League after a top four finish for the first time in over 30 years. Whilst Aachen would be welcoming Rot-Weiß Erfurt at the New Tivoli for their next game, Borussia would be entertaining Dynamo Kiev in the Rich League qualifiers. 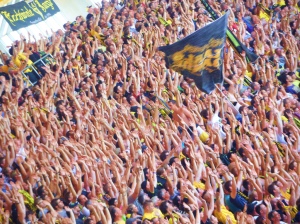 In England a cup game like this would be viewed with some contempt not only by one (or both teams) as well as the fans. But here in Germany, the cup is taken seriously by all concerned. Despite their Champions League game just 72 hours after this tie, they would go into the game fielding a full strength team. The draw for the cup is seeded in a way so that the teams from the lower league play at home, with ties being settled on the day via extra time and penalties if required. So one of the most anticipated ties of the round would see a sell out crowd in Aachen do battle on one of the hottest days of the year.

The first forty five minutes of the journey passed in relative calm. We were, if truth be told, a little fragile from the excesses of the night before, but a liberal dose of an English Breakfast, done German style with a salad no less, had perked up our outlook on life. Then the train pulled into Monchengladbach. “What’s it looking like out there?” Danny asked me as I peered out of the window. “All quiet on the western front”…..A few German riot police stood on the platform and it looked like only a few of their more liberal fans would be joining us.

And then, like the sun rising slowly above the ocean came the sound of noise. Crowd noise. Football fan noise. Ultras noise. And then they were upon us. Hundreds of them invaded the train. Not in a bad, hooligan way, but in a bad for a hangover way. The riot police also climbed on board the fun bus for the journey.

Forty five minutes later we arrived at Aachen West (my German was coming on leaps and bounds) and the whole train headed off the train. Well, not quite. It appears that all the BMG fans were alighting here. Warning bells should have sounded in our collective heads but we just put that down to the headache tablets wearing off from our morning suffering. We were funnelled down the platform, through a tunnel and onto buses laid on for the away fans. We were cast at Ultras, but with pasty tans and a more delicate dress sense.

The buses took us to the New Tivoli and pulled up into a locked car park. We were in the first batch of away fans to arrive and it looked like the open air car park, with no shade or “facilities” would be our home for the next couple of hours. Fortunately, Stoffers was on hand to negotiate safe passage out of our prison and we were free to roam the New Tivoli.

Inside the ground, after the customary search from the thorough female security guard, we headed for the club shop. And what a club shop they had. Some clubs put their badges on anything and everything, priding themselves on levels of tack never seen since Ronco went out of business. But not Aachen. Oh no. Club crested egg timers for just 50 cents, dog scarves and a t-shirts for girls saying “Sorry darling, these babies are reserved for Alemannia Aachen” across the chest. We filled out boots before heading into the bar.

Ah, the bar. Brand new, filled with history (match poster from a game versus Swansea Town anyone?), and waitresses who only needed a nod and a wink to deliver another round of Bitburger. Our attentions were distracted by the weird and wonderful guests who were filling up the bar.Old man with Aachen scarf wrapped around his waist? check. Tall woman with short skirt and Alemannia Aachen tattoed up her inner thighs? check. Very drunk real life Barney Gumble from the Simpson’s bouncing around the room? check. George Michael? check…..woah, back up a little there?George Michael….absolutely. Of course it was him. Why wouldn’t it be him? Even middle-aged Anglo-Greek music stars who bored the world at the Olympics Closing Ceremony need to sometimes have a nibble on a sausage or two at football.

Pre-match training completed we made our way into the stadium for what had been billed by Kenny Legg as a potential “Bananenschale” (Bananaskin). German football clubs are characterised by their ultras groups. Clubs do not just have one, but many. The different factions normally have scary names like the “Death riders”, “Sud Curve Crazies” or the like. Here at Aachen they have the Karls Bande, Aachen Ultras and Aachen Fanatics. Now relationships haven’t been as cordial as they could have been in the fast few months – however it seems things have taken a turn for the worse since (read all about it here).

The whole stadium broke out into You’ll Never Walk Alone, stirring at Anfield, spine tingling in the New Tivoli, greeting the two teams onto the lush pitch.Time for the magic of the cup. The only thing missing was a tinfoil-wrapped version of the German Cup being held up in the crowd.

Alemannia Aachen 0 Borussia Monchengladbach 2 – New Tivoli – Saturday 18th August 2012
At the end of the day Borussia were on a hiding to nothing. Lose, and the press would be all over them, especially with their biggest game in season coming up against Dynamo Kiev. Win, and everyone would simply put it down to the higher ranked team doing their job. And that is exactly what they did. A thoroughly professional performance took them into the second round of the cup, although they took their time to break down a spirited Alemannia side in front of an impressive 31,000 fans including 6,000 from Mönchengladbach.

Despite some early neat play by the Aachen midfield it was the visitors who held the upper hand and could count themselves unlucky not to go in at half time with at least one goal. In fact it looked as if they could still suffer a cup shock up until he 70th minute when they finally took the lead. Xhaka found the space and the pass, Arango did the rest. Back of the net.

Aachen threw men forward looking for an equaliser to take the game into extra time, but as the final corner was cleared they broke in efficient and deadly style, Nordtveit eventually finishing off the counter-attack to put the result beyond doubt.

Keen to avoid being kettled back onto buses and trains at the end of the game we headed back to the bar. Alas, George Michael had headed back to Hampstead Heath for some English hospitality so we were left with the various assortment of German football fans to keep us amused. We remained until last orders (we wanted to show those Germans a thing or two) before heading back to Chez Legg, via a number of bars of course. In the words of the Beastie Boys, No Sleep ‘Til Bonn and day three of our German adventure.