My name is Stuart and I am addicted to pressing F5. There I have admitted it. Whether it be on my laptop, my desktop PC at world, my iPad or just on my iPhone on the train home. I was clicking on that “Search” button on the London2012.com site every few minutes. Ever since LOGOC surprised us all by releasing thousands of tickets in the early hours of Thursday morning I had been trying to fill my calendar on Sunday without much luck. The same events kept appearing as available, but of course we all knew those tickets didn’t really exist. Lord Coe told us to be “patient” and that over 10 billion people were searching the website for 3 tickets, or something like that, ignoring the simple failings of chosing the wrong vendor who had an incredibly poor reputation for managing ticket sales in the past.

But at 11.34pm on Saturday night I struck gold. I hadn’t been to ExCel yet and didn’t really fancy some of the events, but Boxing all of a sudden appeared. Not just any old boxing either. The first bouts of Women Boxing ever held in the Olympic Games. Amazingly, the event had been a demonstration sport back in 1904 in St Louis yet got no backing to make it a formal event. Just over a hundred years later it was finally given the recognition it deserved and it was to be an Olympic event. I quickly pressed “reserve” and I had a ticket in my hand – well almost. Unfortunately I could only get one, so I carefully broached the subject with CMF, playing it up that it was bound to be barbaric and unlady like. She simply raised an eyebrow like she does when she knows I am trying to justify something.

So Sunday Morning dawned and I headed over to ExCel via the DLR from Woolwich. As I had to pick up my ticket I had factored in an extra hour and good job I did. The queue was a mile long (not literally – it was relatively long, OK?) and slow-moving. A Chinese man started to walk down the outside of the queue, holding up two tickets for the Table Tennis. His English wasn’t good but it appeared he had two spares and he wanted to know if anyone was interested. A chap approached him, looking every part a tourist (baseball cap on back to front, oversized backpack, holding a map). He asked how much they were and within seconds he had whipped out a warrant card and arrested the chap for “illegally reselling Olympic Games tickets, pursuant to section 31 of the 2006 Olympic and Paralympic Games Act”

What happened next was amusing to say the least. About half a dozen other blokes who had been milling around suddenly disappeared. They were the real touts, the ones who have hundreds of tickets and sell them at huge profits. They were the ones the police should have been targeting not someone who simply had two spares. Scum.

ExCel was a good and a bad venue for the Olympic events. It was close enough to the Olympic Park to be considered an Annexe. But poor planning saw too many events ending at the same time, leading to overcrowding in the centre. Table Tennis, Judo, Taekwondo, Wrestling, Fencing, Weight Lifting and Boxing were all being held in the halls, and whilst start times were staggered, the end of sessions often overlapped and caused unnecessary overcrowding.

I headed inside, not knowing what exactly to expect. My seat was one of the “reclaimed” media ones. To my left was the assembled world media, in front were the various representatives of countries who had fighters in the competition and to my right was the interview zone. Not a bad seat all in all. 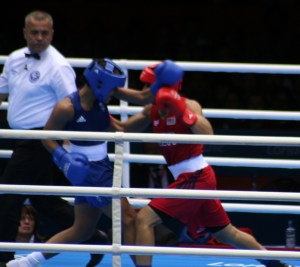 As atmosphere goes it was hard to beat this session. Music pumped out, the light show reminded me of a school disco and the boxers gave it their all. Most people in the arena had come to see Natasha Jonas, who would become Great Britain’s first ever female Olympic boxer when she stepped into the ring for the fifth bout of the session.

The early bouts had seen few surprises.  One of the biggest was that competitors like Kenya’s Elizabeth Andiego or China’s Cheng Dong were actually female.  The intensity of the 2 minute rounds meant that each bout was fast and furious.  The five minutes between each bout was filled with music to pump the atmosphere up even further, culminating in the entrance of “Tasha” Jonas, the first every British Boxing Olympian.  She had a huge fan club in the arena and she needed all of their support if she was to overcome a strong opponent in the form of American Quanitta Underwood.  After round one the Brit was behind 4-3 but then never looked back, powering to a 21-13 win to bring the house down.

What was interesting was the range of the judges scores.  Six different nations for each bout gave their scores at the end of each round and often you would have huge swings in terms of the scoring.  In the past this has led to some “partisan” decisions, although a change in the rules has tried to normalise this.

I left after watching the impressive Swede Anna Laurell win her bout.  She was one girl you wouldn’t mess with down on the dance floor at Zens.  Six feet tall, with powerful arms and a great upper cut, she had the crowd spell-bound.

This was my first every boxing event and I have to say I liked it.  The atmosphere was excellent, the boxing furious and the passion of the crowd and boxers intoxicating.

More pictures from the event can be found here.

Tomorrow – the Holy Grail – a trip into the Olympic Stadium.