Back in the 1970’s Michael Palin and Terry Jones produced a comedy series for the BBC called Ripping Yarns. One particular episode focused on a football team called Barnstoneworth United who had fallen from glory and have lost every game for seasons. It was funny, because nothing like that every happens these days, does it? 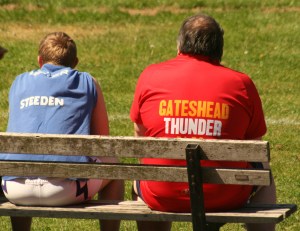 Well it appears it does. The real life Barnstoneworth United are actually currently playing in the world of Rugby League. Ladies and Gentlemen I give you Gateshead Thunder.

Back in 1999 Gateshead RFL were given a silly name and a golden ticket to join the Super League. They even got to rename their stadium (Gateshead International Athletics Stadium) into a tough sounding name – The Thunderdome. Alas the experient failed, and after a planned forced merger with Hull failed, the club withdrew and reformed lower down the leagues.

After a few false starts they worked their way up to the 2nd tier of English Rugby League before falling back into the Co-Operative Championship 1. And that was when the fun started. Since 21st March 2010 the club have played 47 games in this division and they have lost 46 of them. Their last win? At home to the London Skolars. The only game they haven’t lost in the last 26 months? A draw against the London Skolars. And today, they were playing the London Skolars. Despite heavy defeats such as 132-0 to Blackpool Panthers or 94-0 to the Swinton Lions, the travelled with spirit down to North London. After all, London’s second Rugby League team were just above them in the table.

The London Skolars were formed out of an “old boys” network – college students who enjoyed playing the game after they left education. Originally they were called Student Rugby League Old Boys but changed their name as part of an ill-fated attempt to win sponsorship from Skol beer (hence why they are the Skolars and not Scholars). They have also found losing a hard habit to break, winning only a handful of games in the past few seasons (mainly against the Thunder).

This is a tough league for the Southerners. Their most “local” game is now away to Doncaster, some 180 miles away, whilst they also have 500+ mile round trips to Whitehaven, Barrow, Workington and today’s visitors Gateshead.

But with little football options open to me this weekend I had penciled the meeting of the two bottom sides, especially as it was only 30 minutes from home.

London Skolars 48 Gateshead Thunder 22 – The New River Stadium – Sunday 27th May 2012
If you ever wanted proof that the weather dominates our lives here in England then let me take you back two weeks to when London Skolars last home game against the South Wales Scorpions was called off by the referee 30 minutes before kick off due to the rain which had made parts of the pitch unplayable. Two weeks on and there would have been some who would have wanted this game off due to temperatures hitting the high 80’s at pitch side. The Thunder had brought a fair few fans, which considering the run of form they are on was mighty impressive.

I had barely paid my £2.70 (good to see northern prices) for my Tetleys when the Skolars were ahead. Ade Adebisi powered over from short range. One of the Skolar’s fans (you will know who I mean if you have ever seen them play) launched into his huge SSSSSSKKKKOOOOOLLLLAAAARRRS chant which caused another fan to complain that it had caused his hearing aid to malfunction and start buzzing. The try set the pace and tempo for the first half which saw Skolars score four tries to the Thunder’s three.

Throughout the game the crowd in the main stand (only stand) were kept amused by the mascot, who appeared to be a cross between Buzz Lightyear and Captain Haddock, but with a mortar board on his head. I say his, but actually it was a her inside the costume – her pony tail and expertise in skipping giving the game away (I was later informed by the Chairman of the club no less than she is actually a he – oops)

The second half saw the home side dominate, running in a further five tries, the pick of which was the one below which was a flowing move after a Skolars interception. 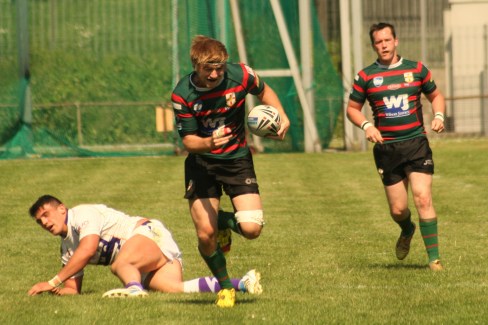 In the end the Skolars ran out easy winners 48 v 22 but the Thunder players or fans never gave up. Who knows what the future holds for them, but on a sunny day in the London Suburbs they contributed to an excellent game of rugby and long may their spirit continue.