After a recent dip in form, some wags in the game suggested that the Swans inexperience at this level would see them sinking into the relegation mire.  So the game against Blackburn Rovers would be key to right the wrongs and put them safely in Mid-table.  Abi Davies was on hand to give the Nero thumbs up or down. 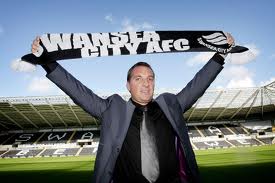 Swansea’s uncharacteristically lacklustre display at Loftus Road sparked concern amongst Swans fans due to the manner in which they slumped to a 4th consecutive defeat. However, efficient with their possession and direct with their approach, Swansea City delivered the perfect response to their woeful performance against Rangers by comprehensively claiming victory over Steve Kean’s Blackburn.

Gylfi Sigurdsson opened the scoring for the Welsh side, before Nathan Dyer and an own goal from Dann ensured Swansea stopped the rot and returned to winning ways. In doing so, condemning Blackburn to their 5th successive defeat.

Swansea’s trio of Allen, Britton and Sigurdsson returned to their exquisite selves on Saturday. Commanding play in midfield as well as showing a dogged hunger to regain possession on the rare occasion that they lost the ball.

Showing far more idea and shape in the final third, Swansea demonstrated that they are far from a one dimensional side as they moved through the phases with greater urgency and pace than they’ve done in previous weeks.  Swansea delivered many crosses into the penalty area and progressed into dangerous positions with far fewer passes which proved immensely effective.

The Swans appeared to have the perfect balance of rhythmic passing movements and penetration, allowing them to dictate the flow of the game whilst also punish their opponents by making their time on the ball count. Both Dyer and Sinclair controlled play out wide, neither fearful of taking on Blackburn’s full backs, they were largely to thank for Swansea’s dominance.

Having been critical of Sinclair’s slightly predictable play over previous weeks, the winger showed greater versatility to his game against Blackburn from start to finish. Taking the ball to the byline before delivering tempting balls into the box, occasionally moving infield and taking defenders on to mass effect whilst also playing as more of a team player, tracking back and completing far more challenges.

With 10 minutes of the opening half remaining, Gylfi Sigurdsson unleashed a thunderbolt strike from long range, forcing a great parried save from Paul Robinson. From the resulting corner, Sigurdsson found himself free on the edge of the box. Allen did well to pick him out with a great pass and the Icelander retained his composure to fire the ball past Robinson and open the scoring with his 7th goal for the club, his first at The Liberty.

The home side continued to assert their authority as Danny Graham came close before Nathan Dyer doubled Swansea’s lead with 2 minutes of the half remaining. Following some intricate passing in the box, Graham, who could have taken on a shot himself played the ball out to Dyer, who’s sliced effort beat Robinson, making a Blackburn comeback extremely unlikely going in at the break.

Organised and disciplined, Swansea’s persistence to push forward with pace proceeded after the interval and they continued to reap the rewards as a completely refreshing, spirited and faultless display was rounded off in the 63rd minute. Superb footwork and trickery from Scott Sinclair saw him weave through the Blackburn defence before pulling the ball back for Sigurdsson, who’s effort ricocheted off the post, hitting unfortunate Rovers defender Dann, who’s touch directed the ball into the back of his own net, compiling further misery on Blackburn’s afternoon.

Caulker’s height at the heart of Swansea’s defence again proved invaluable, as he denied Yakubu any time to influence the game, keeping him in check and cutting off his supply.  Having been static and shown little vision off the ball in their past four games, Swansea were looking a rejuvenated side, creating options by moving into great spaces.

Swansea’s performance was one of the highest ilk, and should restore the team with confidence that may have been lacking recently. Next up for the Swans, another side fighting for their Premier League status as they travel to Bolton, hoping to complete the double over Coyle’s men whilst I would not be tipping Blackburn Rovers to beat the first against the drop to the Championship come May time.