Life sometimes just isn’t fair. Like the fact that I missed out on the lottery jackpot once because the winning numbers were exactly the same as I had picked in my head but couldn’t find a lottery machine nearby, or when you just go past an exit on the motorway to be hit with the traffic jam from hell around the next corner. Alanis Morrissette called it “Ironic” but to me being in a plane crash is not ironic, it is just bad luck. Oh, and Ms Morrissette, when you do “meet the man of your dreams” you could just offer him a threesome with his “beautiful wife”. Just saying.

No, for me life wasn’t fair because I had to spend 10 days travelling. From one side of Europe to the next and I would only get to see ten football matches in that period. Just ten. I can see you crying on my behalf now.

I would be taking in five countries on my travels, meeting up with numerous old friends and drinking pints(and litres) of beer ranking from €1 Pilsen’s in Prague to €8 Amstel’s in Zurich.

The reason for such gallivanting? Well it was the start of the Ocktoberfest season. Now in its third year you can read all about it here. After our successful jaunts in Holland, Germany, Hungary (well apart from the dysentery I picked up last year) and Slovakia in our previous trips, it was the turn of the Czech Republic this year. That was until fate dealt us a lucky card, an Ace in the hole. Europa League football just over the border in Slovakia. Our EFW/TBIR charter says in paragraph 3, section 2:-

“If a game in a city/stadium is being played whereby transport is freely available and journey time is less than 4 hours and there are no alternative destinations, you have to at least spend an hour finding mitigating reasons not to go”.

So that is why at 6.30am I was on board Ryanair 385 to Bratislava. Or actually, to Vienna (Bratislava). Why let hundreds of years of diplomacy get in the way of border agreements eh Ryanair? 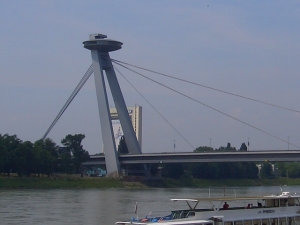 Known as Pressburg until 1919, Bratislava today is home to hundreds of stag/hen weekends every week. As I decamped from the plane and waited for the bus into town I was handed a leaflet offering me “Pussy Galore” at a club in town, that was apparently open at 10am. I asked the spotty youth whether it was the name of a person, since the capitalisation of the words suggested otherwise, but he simply said “girls, boobs, fanny, sexy time”. He failed as a sales person trying to win me as a customer so I declined to visit, although I kept the leaflet for “research purposes”.

I had met up with the Barnet boys on the flight so after decided to go to find our accommodation before getting the weekend started. We found the hotel, and from my balcony I could clearly see two sets of floodlights of the stadium, but which ones? Based on the fact there are only really three teams, and three stadiums in Bratislava you would think it would be quite easy to work out who plays where, and when. Wrong. The situation is like a bad version of Celebrity Squares (random trivia fact – in the first ever episode of the game show Vincent Price was one of the celebrities). It used to be so simple. Slovan Bratislava played at Tehelne Pole, almost next door Inter played at the Pasienky and young upstarts Artmedia, named after owner’s favourite subjects at school, played south of the Danube at the Petrzalka Stadium.

A fall from grace for both Slovan and Inter, meant that Artmedia could claim the spot as the top team in the city, and actually for a while the top team in Slovakia, winning the Corgon Liga in 2005 and 2008. In 2006 they famously beat Celtic 5-0 in the Champions League to qualify for the group stages. Unfortunately nobody had remembered to buy any floodlights at the Petrzalka so games had to be played at the Tehelne Pole.

Then the local government decided that they needed a new national stadium, to be built where the Tehelne Pole was sitting, so that was closed two years ago, forcing Slovan to move next door to the Pasienky. Did that sit well with Inter? Not really because they then went bankrupt and merged with FK Senica. Confused? Well, you will be when I also add that Artmedia are no longer called Artmedia but FC Petrrzalka. That’s handy, I hear you say, playing in a stadium the same as their new name. Er no. They moved to Stadion Rapid in 2009 on the north bank of the Danube. Of course they did.

So when UEFA got those warm balls out and drew Slovan Bratislava against relative big guns Bilbao and Paris Saint Germain the debate opened up where the games would be played. Fortunately for us it was at the Pasienky, which turned out to be the second set of floodlights we could see from the hotel balcony. 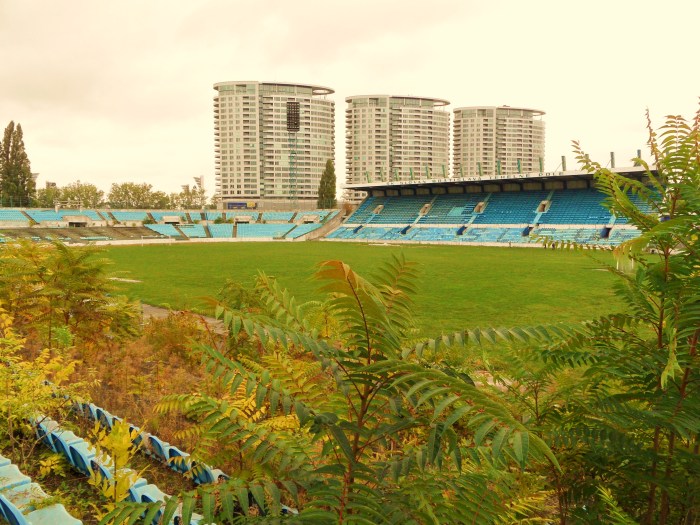 It would have been rude not to see what state the Tehelne Pole these days, so we wandered over. The gates were wide open but the state of the ground almost made you weep. Here was a ground steeped in history, one of the biggest in Czechoslovakia and the preferred home of the national team which had been pillaged. What could have been broken up had been, and the sad netting still hanging down from the goal posts, the huge weeds growing from the terraces and the remnants of the light blue seats just made you shake your head. I felt a bit wary walking around too much, remembering the “Charlie says” videos of my youth, and seeing the electric cables and holes in the floor around the ground. Game a day John found a ball and took it on the pitch. He became the last person to take a penalty in the stadium (for now), and mirroring his hero, Chris Waddle, he ballooned it over the bar.

Nostalgia over we headed into the old town and sampled some local cuisine before meeting up with the rest of the advanced party who had arrived by train from Prague. Our first home for the evening was the Arena Bar, next to the hotel which had the cheek to try to diddle us by serving pints (well, half a litre) of fine Slovakian beer for €1.50! It got worse as we moved to a pub round the corner that had the cheek to want €1 a beer. Our host for the evening was Dan Richardson, a west country lad, who lived in Bratislava, supported Slovan and ADO Den Haag and worked on a rig in the North Sea. He is a season ticket holder at Slovan and proudly showed us the ticket which cost him just €41. The tickets for this game? €20. And who says clubs try to rip off fans these days?

But for our €20 we also got a Slovan t-shirt and a nice shiny flag to wave, which is more than the travelling PSG fans got. As they (apparently) approached the gates of the stadium en-masse, they were told they weren’t welcome and the police moved them into a local pub.

Slovan Bratislava 0 Paris Saint Germain 0 – The Pasiensky – Thursday 20th October 2011
Despite a major renovation of the Pasiensky in recent years to bring it up to UEFA 3 star standards so it can host games like this, it is still basically an open air athletics stadium with the biggest scoreboard known to man. That didn’t stop the home fans whipping up an excellent atmosphere to try to spur on their team against their big spending opponents. Without a point from their opening two games in the Europa League few gave them a chance against the French side. 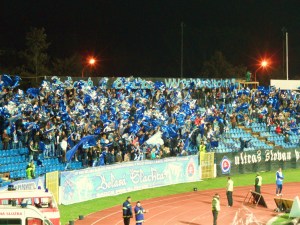 It wasn’t a surprise to see the French do all the early running, with the Slovan keeper Lukáš Hroššo the busier of the two keepers. However, the home side seemed content to try to frustrate the French whenever they could and the first half ended with few chances and certainly no goals. Still, we found amusement at the littlest things, as we always do. An old fashion fire-engine, ready to douse the fires of Slovan ambition? Check. A mascot dressed up as a Slovan badge with white tights on high fiving us? Check. Big Deaks falling off the seat and tumbling down the terraces? Check. 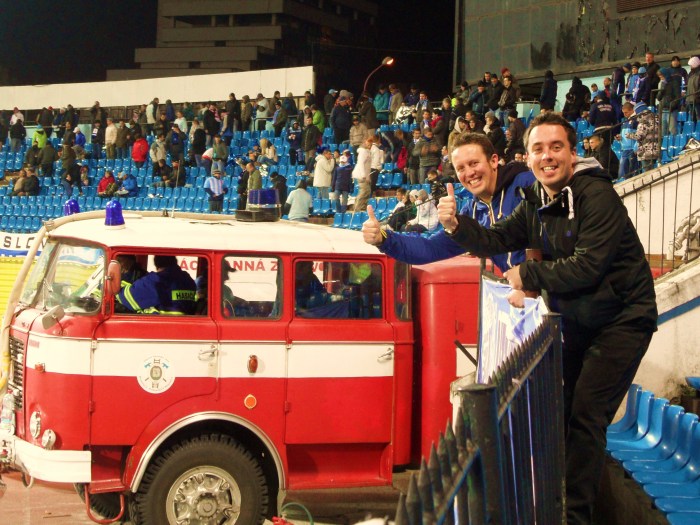 It was much of the same in the opening exchanges of the half. But the first talking point came on the hour mark as PSG’s Chantôme was sent off for a second yellow. That sparked Slovan into life and Vladimir Weiss’s team started finding a bit more space and created their best chance soon after.

The night got even worse for the visitors in the 80th minute when Siaka Tiéné was sent off for a late challenge. We were standing in the “Ultra” section and sections of fans around us broke out into choruses of monkey chanting as the full back walked off. It was a shock to hear it to be truthful and Andy Hudson walked out. Slovakia had had its problems with this before, famously when England visited back in 2002 and James Baxter has written at length about the situation here. Having now read the UEFA match report is it surprising to see it wasn’t mentioned at all? Not really. And if they did what would they do? Fine them another couple of thousand Euros? I will get the broom if you want to lift the carpet Michel.

With PSG down to nine men, Slovan smelt victory. Only the timely intervention of Zoumana Camara prevented Karim Guédé slotting the ball into the net. However, they couldn’t find a way through and had to settle for a nil-nil draw. 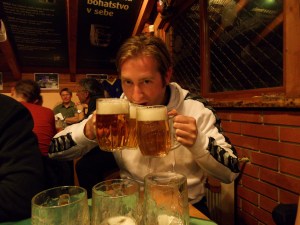 It would have been rude to simply ignore the hospitality on offer in the fine city, so we went back to the Arena bar and contributed significantly to Slovakian economy. Despite a 4am start we carried on until the wee small hours, donning our Slovan t-shirts and re-enacting various tactical subtleties of the game using shot glasses.

8am and we were all (well mostly all) up and trying to find something edible at Bratislava train station for the four hour ride through Hostel country to Prague. Oktoberfest had started with a bang, and with six games due in the next sixty hours was going to continue to just get better and better.

More pictures from day one can be found here and here.

3 thoughts on “Bailing out the Eurozone – Oktoberfest Day one”