Saturday saw The Swans play host to Steve Bruce’s Sunderland where both sides went into the game looking to sign off for the international break with their first victory of the season, and of course Abi Davies was in the West Stand hoping to see some Tekkertastic football. 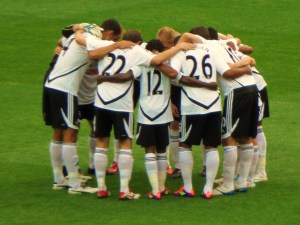 The Black Cats, like Swansea, went into the fixture aiming to bounce back after their shock exit from The Carling Cup in midweek. Having made nine changes to the side for their Cup tie against Shrewsbury, Brendan Rodgers unsurprisingly reverted back to the eleven that started against Wigan last weekend, and in the continued absence of Gary Monk, Ashley Williams lead the side for the second consecutive League game.

Swansea got the game under way and aside from an early chance for Sunderland debutante John O’Shea, it was the home side who appeared to settle into the game the quicker, looking composed in possession, and with a lack of pressure from the visitors were allowed to build the play from defence, as well as dictate the pace of the game.

Despite Swansea’s domination, Sunderland posed a threat on the counter attack and signalled danger with 13 minutes played as Lee Cattermole played through Asamoah Gyan , the move was well read by Michel Vorm who came off his line to deny the striker.

Gyan, who aired The Black Cats biggest threat, was presented with the games next chance as he tried to capitalise on Steven Caulker’s loose back pass, however Vorm again reacted well to dispossess the striker and clear the danger.

Twenty minutes into the game Swansea began to up the tempo, pressing high up the field and not allowing Sunderland time on the ball, as Brendan Rodgers side were showing more grit and determination to regain possession.

Last season’s top scorer Scott Sinclair came the closest to breaking the deadlock in the first half. Drifting infield before unleashing a thunderbolt strike from 30 yards, the winger could only watch as his effort rattled the woodwork.  Moments later Sinclair turned provider as his ball into the box was met by fellow winger Nathan Dyer who’s diving header fired just wide of the target.

With half an hour played, Leon Britton provoked the next attack of the game, using his great skill, the deceivingly powerful midfielder worked his way to the edge of the penalty area before playing through Danny Graham, who turned well and looked destined to provide Swansea’s first Premier League goal, only for some last-ditched defending from Wes Brown to deny the striker.

A catalogue of defensive errors from Swansea almost allowed Gyan through on goal however Agustien recovered to clear the danger.  Swansea’s best chance of the game came five minutes before the interval when Kemy Agustien played the ball into the box for Danny Graham, who somehow couldn’t direct his header on target from eight yards out.

Brendan Rodgers would have undoubtedly been the happier of the two managers going in at the interval, however you couldn’t help but wonder whether the hosts would be made to rue missed opportunities.

Swansea were in the ascendancy from the outset of the second half with Danny Graham first to test Sunderland keeper Simon Mignolet. As Neil Taylor found Graham at the far post, the striker’s shot from an acute angle forced Mignolet into parrying the ball to safety.

It was Swansea’s record signing who was presented with the hosts next chance, after doing everything right, trapping the ball as well as turning Anton Ferdinand, the ex-Watford man’s shot glanced across the face of goal.

Following a solid first half display from both Swansea centre-backs, Caulker and Williams looked to be continuing in the same vein after the break, as they kept Sunderland’s attack force quiet. With their partnership and understanding seemingly growing with every game they play, I feel Gary Monk will struggle to regain his place in the starting XI when fully recovered from his ankle injury.

With little under twenty minutes remaining, Sunderland caught Swansea on the counter as Gyan surged forward with Neil Taylor the only player back for Swansea, however Michel Vorm remained composed once more to deny the striker.

Stephen Dobbie and Joe Allen were introduced with ten minutes left but couldn’t influence the score line, despite a promising end to the game from Swansea the game remained goalless.

Despite a solid display, Swansea City’s scoring drought continues as they still await their first Premier League goal whilst Danny Graham will feel unfortunate to not get his first competitive goal for The Swans against Sunderland as a number of decent opportunities were squandered by the striker.

Both Scott Sinclair and Nathan Dyer enjoyed a great deal of success against Sunderland’s full backs, seemingly growing in confidence with each and every attack it is evident the two wide men will play crucial roles in the remainder of Swansea’s campaign.

Michel Vorm earned the recollection he deserved as he was nominated man of the match following another sterling performance where he demonstrated a number of qualities to ensure he recorded back to back clean sheets. Reading the game well and commanding his area convincingly, the Dutch International is continuously proving himself to be one of the best signings of the summer.

Swansea’s next fixture in a fortnights time sees them travel to The Emirates where they will continue their search for their first Premier League goal and victory.