For the first time in her life, Abi Davies was going to see her side at the Liberty Stadium as a Premier League team.  She, along with 20,000+ other Swans fans hoped ex-boss Roberto Martinez wasn’t going to ruin the party. 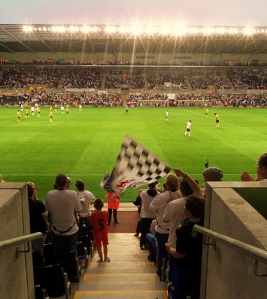 Following their defeat at The Etihad Stadium 5 days ago, Swansea City played host to Roberto Martinez’ Wigan on Saturday in the first ever Premier League game to be played outside of England. Brendan Rodgers side would have been aware going into the game that they should be taking maximum points from sides such as Wigan, if they are to retain their Premier League status.

The last meeting between the two clubs came in the Carling Cup last October, where Roberto Martinez’ current side knocked his former club out of the competition.

Much speculation prior to kick off had surrounded the reception Martinez would receive from Swans fans on his return to The Liberty, due to the manner in which he left South Wales. Having said in an interview that he would have to be forced out of the club, The Spaniard then left his post at Swansea in order to take charge at Wigan. Taking the majority of Swansea’s back room staff as well as two key players in Jason Scotland and Jordi Gomez. The latter of the two featuring from the outset on Saturday.

However when the sides emerged from the tunnel there appeared to be more admiration and praise for current boss Brendan Rodgers than bitterness towards the former manager.

Had results gone differently at the back end of last season, this game could easily have been a Championship fixture so was undoubtedly going to be a close contest.

Rodgers made two changes from the side that started against Manchester City as Wayne Routledge made his full début for Swansea, and Neil Taylor returned to the starting eleven following his three game suspension. Meaning Stephen Dobbie and Alan Tate had to settle for places on the bench.

With Gary Monk still absent, Ashley Williams was handed the armband for The Swans first home game since promotion to the top flight.

The Latics were on the back foot from the outset, with Swansea taking under 2 minutes to create their first chance of the game. Following some crisp one touch passing between Rangel, Sinclair and Dyer, the ball was played through for Danny Graham who’s shot was easily dealt with by Ali Al Habsi.

Swansea’s record signing Graham was presented with another chance for the home side moments later, and despite his effort firing across the face of goal, Scott Sinclair kept the attack alive however his shot fired marginally wide.

The Swans applied an onslaught of pressure on the visitors however there seemed to be a lack of conviction and penetration in the final third, as Brendan Rodgers side were finding it hard to test Al Habsi.

The home sides best chance of the half stemmed from an Ashley Williams clearance, which Sinclair latched onto before setting Routledge free down the left flank. The former Newcastle midfielder’s cross into the box required a simple tap in from Danny Graham, however Alcaraz intercepted to deny the striker.

The Swans continued to dominate and following three corners in quick succession, Leon Britton was found with space on the edge of the area- the midfielder couldn’t emulate the success he found in Swansea’s last game at The Liberty, as his effort blasted high over the target.

Michel Vorm was called into action on the stroke of half time as ex-Swansea loanee Jordi Gomez effort from an acute angle tested the keeper, after initially spilling the ball the Dutch keeper recovered to collect.

The sides went in level at the break, with both teams having squandered chances to take the lead.

The first opportunity of the second half fell for Wigan ‘s Mohamed Diame, only for his shot from distance to fire wide of the target.

Swansea were quickly back on the offence as Scott Sinclair was given the freedom to run at the Wigan defence on a number of occasions before a shooting chance arose for the winger, following some great work from Danny Graham. Sinclair didn’t make the right connection with the ball as it went out for a throw.

15 minutes into the second half, The Swans came agonisingly close to breaking the deadlock as Rangel’s scuffed shot found its way to Danny Graham, who couldn’t break free from the Wigan defenders to get a shot away from 6 yards out.

Débutante Wayne Routledge was next to try his luck, after a great build up, Rangel played the ball to Dyer who cleverly stepped over the ball allowing it to run through to Routledge and after muscling off challenges from Wigan defenders, his effort fired marginally wide of the far post.

Wigan began to up the tempo as they pressed for the opening goal, and after Moses forced a fine save from Vorm, Gomez sweetly struck shot got the better of The Swans keeper only for The Spaniards effort to be denied by the cross bar.

Victor Moses’ endured the same fortune as Gomez moments later as his strike rattled the woodwork.

It looked as though Swansea were going to rue their missed opportunities with little over 15 minutes of the game remaining as Ashley Williams was adjudged to have brought down Gomez inside the area. Phil dowd had no hesitation in pointing to the spot and Ben Watson, who scored for The Latics the last time the two sides met, stepped up to take the spot kick, however Dutch international Michel Vorm kept his composure to keep out the midfielders effort and keep the scores level. Having made 11 saves against Manchester City, more than any Premier League keeper made in a single game throughout the whole of last season, along with another sterling performance against Wigan, Vorm has become an instant fans favourite amongst Swansea City fans.

With 15 minutes left on the clock, Brendan Rodgers made a double substitution as Stephen Dobbie and Joe Allen were introduced in place of Routledge and Britton.

Dobbie was involved in the action immediately as his venomous shot from outside the area was parried away by Al Habsi, before Scott Sinclair failed to hit the target from the rebound.

Swansea had further chances through Nathan Dyer and Dobbie however neither found the back of the net and the game remained goalless.

Despite Scott Sinclair and Nathan Dyer having a larger impact and seeing a lot more of the ball than they had last week, as well as Swansea yet again dominating in terms of possession, Brendan Rodgers side were still finding it hard to break through the oppositions back line.

Swansea still await their first goal of the campaign however by keeping a clean sheet extended their unbeaten run at The Liberty to 10 games. They will now continue their search for a first Premier League victory when they entertain Sunderland next weekend.