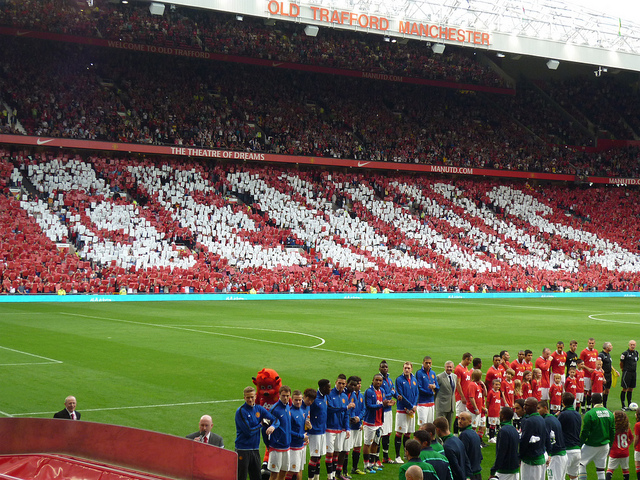 And the excitement of Christa Norman’s excellent piece on the pre-match New York Cosmos press conference, we sent James Boyes, Lewes Man Of The Year along to Old Trafford to watch the game itself.

“Train in the morning, pick up my children from school, play with them, have tea, put them to bed and then watch a bit of TV.”

This doesn’t sound like the typical day of your average Premiership footballer, but when you’ve been described by Xavi as “a role model” then you’re not really an average footballer anyway. Paul Scholes is definitely not one of those.

The last time Scholes played for Manchester United was as a second half substitute against Xavi and his Barcelona teammates at Wembley last May in the Champions League final.

It didn’t quite go to plan for the Red Devils who were made to look fairly ordinary by one of the best club sides ever to have graced a football pitch, but in his heyday, Scholes could have quite comfortably worn the colours of the European Champions.

One thing about Scholes is how highly regarded he is by other players, both past and present. One former European Champion Zinedine Zidane described him last year as “almost untouchable.”

“There is no doubt for me that he is in a class of his own,” said the Frenchman. “I never tire of watching him play. You rarely come across the complete footballer, but Scholes is as close to it as you can get.”

Scholes’ manager Sir Alex Ferguson describes him simply as “an absolute genius of a footballer,” so it’s fairly obvious then that the boy is pretty useful.

The midfielder’s only weakness is his tackling – he is the third most booked player in Premier League history with 90 yellow cards and has been booked the most times in the Champions League – but it’s a sign of his overall ability that he hasn’t been labelled with a “dirty” tag despite Arsenal boss Arsene Wenger suggesting that “there’s a little bit of a darker side in him.”

Despite this though, he’s a player that most supporters would want in their own side although interestingly, United never once had any interest for his signature from another club, partly because they probably knew he wouldn’t want to leave anyway.

In what seems a fairly unusual situation these days, Scholes not only played for his hometown club but also played with them for his entire career.

Contrary to popular belief, Scholes wasn’t a supporter of Oldham Athletic in his younger days – he only went to Boundary Park with his father because it was easier for him to get tickets than Old Trafford.

He was a member of Oldham’s School of Excellence but left when he was 14 to sign for United. His debut in September 1994 at Port Vale in the League Cup saw the local MP complain that United had dropped Eric Cantona, Mark Hughes and Andrei Kanchelskis and were fielding an under-strength team of unknowns.

Scholes lined up alongside a number of United youngsters including David Beckham, Gary Neville and Nicky Butt and marked the occasion with both goals in the 2-1 win.

At the time, Scholes was a notable striker, netting on his full league debut, a 3-2 defeat against Ipswich, and going onto score seven goals from ten starts in his first season, and 14 goals from 18 starts in his second season.

Eventually he moved into midfield, playing in arguably one of the best quartets in Premier League history alongside Beckham, Roy Keane and Ryan Giggs, becoming United’s fourth highest appearance maker (676 games) and lining up alongside Ruud van Nistelrooy as the club’s joint ninth highest goalscorer (150 goals).

Scholes won 66 England caps, scoring 14 goals under four different managers from May 1997 to June 2004. He decided to retire from international football after the 2004 European Championships at the age of 29, frustrated at being played out of position, and ignored the advances of Sven-Goran Eriksson, Steve McClaren and even Fabio Capello last season to reconsider his decision.

He announced his retirement from football three days after this year’s Champions League Final defeat with the news coming when Scholes and his family were out the country on holiday, far away from the media gaze.

Manchester United v New York Cosmos – Old Trafford – 5th August 2011
There was no escaping that last Friday night at Old Trafford though, when Scholes made his final bow in front of a sell-out crowd for his testimonial game.

He had invited New York Cosmos along to be the opposition, but given the fact that they only currently have a developmental side, the team was made up of a number of football legends including Fabio Cannavaro, Michael Salgado and Patrick Viera, and a splattering of former United favourites in Gary Neville, Nicky Butt, Dwight Yorke.

Cosmos not only brought along Honourary President Pele but also Director of Football and ex-United striker/hero/legend/god Eric Cantona, who is a not insignificant figure around these parts.

With due respect to Cosmos, a player of the stature of Scholes ought to have guaranteed a big name club as his testimonial opposition, but with Cantona and Pele involved in building the club to rival its standing of the 1970’s, maybe in time it will be seen as a shrewd choice.

The same could have been said about the musical accompaniment, but Scholes kept that fairly low-key too, with singer and ‘Corrie” actress Kym Marsh blasting out a rendition of “Que Sere Sere” but cleverly changing the lyrics to “Only One Scholsey.”

The PA system was ramped up before kick off, as if the imminent arrival of United, Pele and Cantona wouldn’t have had the fans at fever pitch anyway. However, tracks from the Stone Roses, James and the Happy Mondays are entirely appropriate whatever the occasion. And being in Manchester makes it even more authentic for a southerner like me. 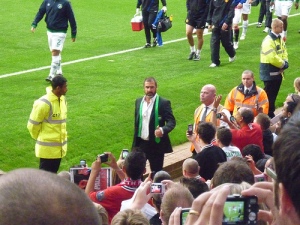 The players lined up to welcome Scholes and his kids onto the pitch, with the word ‘Genius’ held up in the North Stand, before a presentation by Ferguson and United Chief Exec David Gill.

The game itself was never likely to be a classic, but some players still showed they were more than capable, with Salgado and Cannavaro bossing things for Cosmos and Yorke proving he hadn’t lost his touch.

Scholes also impressed, pulling the strings for a full strength United side and pinging balls around like he was playing with his kids in the back garden.

They would have been impressed with their dad when he unleashed a screamer to open the scoring from the edge of the area, a fitting goal for his last at Old Trafford, which had the stadium rising in appreciation.

The supporters weren’t so appreciative for the second goal though, playfully booing Wayne Rooney who stepped up to take a penalty when everyone else wanted Scholes to score.

A number of substitutions changed the flow of the game in the second half as a younger United side attacked at will, although the party atmosphere following Danny Welbeck’s goal was ruined somewhat by Viera’s introduction, who was booed every time he touched the ball until the end of the game.

The fun returned when Neville replaced Salgado, and with half an hour left, a brief Mexican Wave fluttered around the stadium a few times as supporters tried to entertain themselves, a 6-0 win obviously not being enough for them. 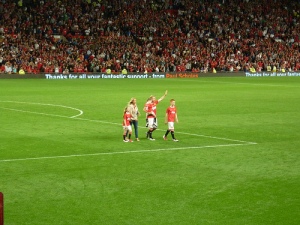 Scholes thanked the crowd at the end of the game, and said that he hoped he had brought them some good memories. But a fitting end to a great Old Trafford career saw him salute the fans on one last walk around the stadium with his family, who no doubt will be seeing more of him in the months to come. And that’s just the way he likes it.

More pictures from the game can be found here.