Our week of sun, sand and looking at crap tattoos in South Wales was coming to an end. With work calling us back to London it was time to back up the TBIR bus and head on down the M4. But wait, what is that I can hear calling? Is it a bird? Or a plane? No, silly, it is another football match. AND it is literally on the way home (well bar a mile diversion off the motorway). Now how could I sell this to CMF and the Little Fullers? Of course! It was Port Talbot Town. Hmm, still not enough? Well what about the fact that they wouldn’t have to actually leave the car?

Port Talbot Town’s GenQuip Stadium has one unique value. Certainly something I have never seen since they banned those little blue cars from parking behind the goal at Stamford Bridge for “health and safety” reasons back in the late 1980s. You can drive your car in and park it by the side of the pitch….(steps back awaiting amazed response). Yep, it is genuinely too good to be true.

So with twenty minutes gone in the game, and the “steward” on the gate had enough of collecting cash we drove into the ground and parked up. The girls were happy as they had their music, magazines, make up, etc. And I had a beer and some football.

Granted it was a pre-season friendly, with Cardiff City putting out their academy team bar one or two exceptions (Stephen McPhail anyone?) but few can say they have watched a game in such circumstances. If only all football was this easy to persuade three girls to go to.

Port Talbot Town 2 Cardiff City 2 – The GenQuip Stadium – Friday 5th August 2011
Even with a Cardiff City team of youngsters the omens weren’t good for Port Talbot as the visitors took the lead in the third minute when a deflected shot had the Town keeper well beaten. The small Cardiff “Crew” in the stand went mental. Someone had smuggled in a can of Strongbow for them to share and one sniff had gone to their heads.

It got worse. Not on the pitch but off it. A conga around the perimeter failed to see them attract any new fans so they took to trying to roll down the grass banks to gain some more attention. It impressed 8 year old Littlest Fuller but that was about it. In the meantime Port Talbot scored twice, first Dylan Blain heading in a Cortez Belle cross-cum-shot and then Lee John striking the ball cleanly and with power when he found himself in space.

After the usual substitutions at half time the game restarted with Cardiff in the ascendancy. Adam Smith is a name to watch out for in the future and not just for his thoughts on global economics. The wide man was the difference between the two sides in the second half, scoring an equaliser and then hitting the post. 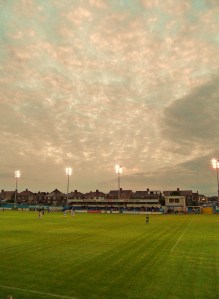 A draw was a fair result in the end. Few, if any of the Cardiff side will make the trip down to Upton Park on Sunday for the nPower Championship season opener, but for Port Talbot a new Welsh Premier League beckons with their first home game being a week on Friday with TNS the visitors. Whilst they can hope to repeat last season’s sixth place finish, they know this year it will be a tough call. However, they do have the prospect of at least two games with local (and we are talking about 2 streets away local) rivals Afan Lido at Christmas to look forward to. For me, it was a four hour drive home, but what a lovely way to finish off a great week in Wales.

More pictures from the game can be found here.