I am not even going to start expressing my sadness at the way my team has been managed tonight when relegation is so raw.  That will come over time.  But instead a look back at my memories from that first season 7 years ago in the second tier of English football.

The Championship isn’t that bad is it? I mean you get 8 extra games to watch for a start, and the possibility to play at Wembley.  You get to go to some new grounds, be treated as if you were still in the Seventies by regional police force and have small firms trying to have a go at you as a normal peaceful fan so that they can claim they “ran the famous ICF”.  It’s not as if we haven’t done it before, although thinking about it now and remembering the low point of a nil nil draw at home to Walsall who did not enter the West Ham half for 45 minutes still sends chills down my spine.

In all of my years supporting West Ham, we have spent a fair share outside of the top flight.  In fact if I take it from my first game in 1974, the club have spent 8 seasons in the second tier of English football or around 22.5%.

Some of the club’s greatest achievements has been whilst they have been outside of the top division.  1980 FA Cup winners, 1980 Charity Shield runners up, 1981 European Cup Winners Cup quarter finalists, 1981 League Cup finalists, 1981 Second Division champions, 1990 League Cup semi-finalists and 1991 FA Cup semi-finalists.  Hardly an impressive haul (bar that 11 month period in 1980/81) but still better than 75% of the other teams who have competed in the Premier/Football Leagues since then.  Better than Newcastle United and Manchester City during the same period.

But we all know that the football world changed in 1992 with the creation of the Premier League.  Since then it hasn’t been acceptable to be in the lower leagues.  A stigmata on your club badge, and one that you must rid at all costs.  Whilst some clubs may say “a season out of the top flight is what we need”, what do they really think on that first midweek game in August when they would have been playing Chelsea at home rather than Accrington Stanley away in the first round of the Carling/Mars/Worthington/Whoever stumps up the cash League Cup first round.  And now there is the added danger of “double dipping”.

In February 2007 West Ham travelled through the Blackwall Tunnel to meet Charlton Athletic.  It was billed as relegation six pointer, and to add even more spice to the occasion, Charlton had just appointed ex-West Ham boss Alan Pardew (who ironically had masterminded the Hammers escape from the Championship two seasons previously), whilst West Ham’s manager was ex-Charlton legend Alan Curbishley.  The four nil home win took the Addicks up the table and plunged West Ham into the relegation zone.  Three months later West Ham would be celebrating the unlikeliest of escapes (let’s not get into the whole Tevez affair just yet) whilst Charlton had been relegated.

Last Saturday Charlton finished their League One campaign with a nil nil draw with Hartlepool United, meaning that they finished in 13th spot which was their lowest finish for over fifty years.  Southampton, Norwich City, Leeds United, Leicester City, Nottingham Forest and Manchester City.  All bar Leicester City had played in the inaugural Premier League season and as recently as 1994 all had been playing together in the top flight of English football.  Yet all have been relegated to the third tier of English football since that sunny day at Bramall Lane in August 1992 heralded the birth of a new monster.

So the danger is real.  Look at the foot of the Championship this season coming into the final weeks of the season.  Some familiar names down there?  Sheffield United (Relegated but Premier League until 2007 – yes I know about Tevez), Middlesbrough, Portsmouth (relegated last season), Coventry City, Crystal Palace and Derby County.  These are teams who financially simply cannot compete for a number of reasons after dropping out of the Premier League.  There was always a view that Parachute payments “eased” this landing, but apart from West Bromwich Albion, which other team has bounced straight back every time they have been relegated?

This season has proved a watershed in the Premier League/Championship dynamics.  For only the second time ever, not one of the three promoted clubs from last season will be relegated.  And add to that the fact that none of the three who went down from the Premier League in May 2010 (Burnley, Hull City and Portsmouth) have come back up then you can see for the first time ever the league will essentially have six “new” teams in.  Despite an increase in the parachute payments for those relegated last season, they have not been able to compete with the top six.  And that is the sign of a new trend, a very worrying trend for teams who find themselves being relegated from the Premier League.

The fact that Cardiff City and Forest were in the playoffs last year, whilst Swansea City missed out by just one point suggests that these three have found some kind of Championship formula.  All three of them have done their time in the third tier of English football in recent years (as too did runners up Norwich City) and perhaps set their expectations accordingly, whilst the likes of Derby, Palace and Sheffield United didn’t change their attitude. “We are a Premier League club playing in the Championship” is not a strategy guys.

So what future do the Hammers face?  I remember our last stint in the Championship very well.  We opened the campaign with a lunchtime kick off in nearly 100 degree heat away to Preston North End.  From the superstar laden team that was relegated in May 2003 (including such players as Joe Cole, Freddie Kanoute, Paolo Di Canio, Jermaine Defoe, Trevor Sinclair and David James) only five players played in the first game the following season at Deepdale.  Two early season defeats to Rotherham United (where the club didn’t endear themselves to anyone by refusing to use the cramped changing rooms at Millmoor) and then Gillingham (where Defoe picked up the first of his THREE red cards in four months before pissing off to Spurs) brought the fans crashing down to earth, realising that this would be a tough season.

The one things that didn’t happen was the significant fall in attendances.  Thanks to some sensible pricing initiatives, the home attendances rarely fell below the 30,000 mark, and considering some teams such as Rotherham, Walsall and Crewe literally could have come in a taxi it was amazing to see the home fans get right behind the team.  For me the one home game that still sticks in the memory is Gillingham on the 27th March.  Not for the fact that this season there were three divisions between the two, but for what was going on behind the scenes on that day.

We arrived at the ground as normal, bought pies and tea and as we went to go into the stand we were held back by a steward.  A group of wannabie Under 5’s (the trainee Inter City Firm) with their hoods pulled up steamed past us, chanting about “your going to get your head kicked in”.  They took their places at the front on the Bobby Moore Lower, standing for the whole of the first game aiming abuse at the bemused Gillingham fans at the other end of the ground.  This was at a time when we were constantly being told to sit down by the stewards, so the hypocrisy of this was hard to stomach.  When the TV cameras then starting filming them, they got worse.  “Twats”, “Tosser”, “Fuck off back to the 80’s” came the shouts and at half time they disappeared never to return again.  Two weeks later in the match programme we found out that they were actors filming a new movie called Green Street staring Elijah Woods.  The rest is history.

West Ham never put together a really serious promotion push.  They were a firm fixture in the play offs from Christmas, only dropping out once in that period, after they lost at Easter to Crystal Palace and they secured their place in the end of season with a thumping win at Watford. 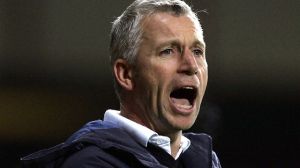 Pardew is a great motivator.  For all his faults “off the pitch”, he pulled together a squad that deserved promotion.  He re-established the club’s connection back to some of its historic principles.  He developed the phrase “Moore than just a team” which he wore with passion on his T-Shirt (and we all did) in homage to Bobby Moore.  He whipped up the atmosphere for the second leg of the Play Off semi-final with Ipswich Town into a frenzy, and when Christian Dailly netted the late winner, we all agreed he could shag our wives (as per the song ). So we were off to Cardiff for the Play Off final against a Crystal Palace side managed by ex-Hammer Iain Dowie, and one who had been flirting with relegation prior to Christmas.  West Ham were 2/1 favourites, so of course they lost.

As for the day itself?  Well that will be for another day. Perhaps when we are back in the Premier League.  Excuse me now as the postman has just delivered my “On loan to the Championship” t-shirt.

2 thoughts on ““Stand your ground and fight!””