Despite having ample time to calm down from Norwich’s dramatic last minute winner over Derby County on Monday, I think I am still shaking. What an incredible moment and what an incredible season.

The man of the moment

To recap, Simeon Jackson completed his hat-trick in the 96th minute against the Rams to secure a 3-2 victory that kept us in 2nd place with two games to go.

I have gone mental for some goals in my time, but a moment that sees your team secure three points, in the 96th minute, to remain in the driving seat for a Premier League place with just 180 minutes of football to play – you pull out all the stops to show your delight.  This is before I even consider that we were a League One team this time last year. When you take this into account, it almost defies logic that we are only five points behind a QPR team that is supposed to be running away with the league title. Not many football bets would have been placed on this happening, that’s for sure!

Last minute goals have been a common thing for Norwich fans in the last couple of seasons and this is a trend that delights us as much as it much infuriate our nearest rivals in the league.  Cardiff City and QPR fans in particular would have been cursing Jackon’s sixth goal in as many games on Monday. If we do end up going up, it is because of moments like this, of that there is no doubt.

To be honest, I’m at a loss of what to say with regards to how good the last two seasons have been and how amazing a job Paul Lambert has done. He has assembled a talented, hard-working, determined and honest group of players.

I have never been so proud to be a Norwich fan, it’s that simple. Even when we went up in 2003/2004, it wasn’t quite like this. Don’t get me wrong, it was a superb season, but it didn’t have the drama of this year.  Just look at the Easter weekend we have just had. Perhaps it will explain my rambling a bit. A 5-1 win over East Anglian Rivals Ipswich and then a stoppage time winner in front of a sun soaked Carrow Road crowd.

Throw in the fact that we have gained two points over Cardiff and Swansea, as well as four points over Reading in the process, it has been the weekend dreams are made of.  We even got to have a little snigger at the QPR fans prematurely celebrating on the pitch before Jackon’s late goal.

At the end of it, it means that it is a shoot-out between us and Cardiff for the 2nd promotion place. After the drama of the season so far, I’m not sure I can handle the play-offs, so it is all about the next two games.

We are in the driving seat as we sit a point above Cardiff and my view is that we will secure promotion on the final day as long as it is in our hands going into the home game with Coventry. 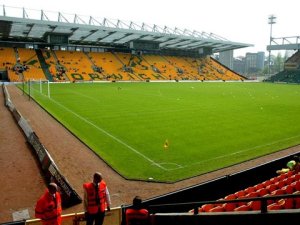 Will it see Premier League football next season?

This makes the next game at Portsmouth incredibly important. By the time we kick-off next Monday, Cardiff will have already played their game against Middlesbrough, so the pressure could well be on if Dave Jones’ men pick up three points. Something football betting  pundits will expect them to do.  For me, the game at Fratton Park is the defining one. This is what it all boils down too. Don’t get me wrong, I know a home game with Coventry won’t be easy, but three points against Portsmouth puts us in a fantastic position – regardless of Cardiff’s result.

If you are an outsider looking in, you might be thinking that all the signs are there for it to be our year with an emphatic win over local rivals and last-minute winners.  As much as I am trying not to agree with this view as there is so much that could happen in the remaining two games, I am daring to dream. Find me a happier set of football fans in the country than Norwich right now.

Of course it could all end in despair, but we have proved time and time again that we can perform when the pressure is on and it just needs one final push for us to return to the top flight. Bring it on