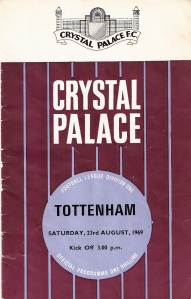 First, a confession. This wasn’t my first game – that was Chelsea 1 Nottingham Forest 1 in August 1968. But my only memory of that is of some lads trying to get a bonfire going on the North Terrace, and I’d also have to confess to being a Chelsea fan at that age. And indeed, when I went to my second football game, the first of what turned out to be countless Palace games.

It was my 11th birthday treat, but Chelsea were away, so my brother Graham and myself were to meet up with his brother-in-law George and his mates, who were all die hard Fornton Eefite Palace fans, to watch this game as neutrals. It was Palace’s 3rd ever home game in Division One, and none of us were expecting them to get anything from it. Spurs had Greaves, Chivers, Gilzean, Mullery, Jennings, ‘Nice one Cyril’ Knowles. Palace had John Jackson and Steve Kember, and nobody else those outside SE25 had heard of.

To be honest, I remember very little of the game. In fact, until I researched this, I remembered it as 0-3, and as being on my actual birthday, the 25th. I do remember the size and buzz of the crowd, the scarf sellers and the huge sign saying Crystal Palace Football Club on Whitehorse Road, the smell of fried onions, the huge piece of ground leading up to the turnstiles, the sight of a packed Holmesdale, the crowd surges (with the odd visible ruck), the peanuts (in their shells, natch), and of course ‘Glad All Over’ being played, with the advertising hoardings being bashed in rhythm. But most of all the Pawson’s Arms / Supporters’ Club beer-fuelled banter of George and his mates. They expected to lose, but were going to have a laugh and several drinks and support their Palace anyway. This looked like fun.

By halfway through that season, I was a home regular with my Dad (I have no idea where he was for that Spurs game, as HE was the lapsed Palace fan). Nearly 42 years later, there have been changes in the ground (though probably not enough), and so many relegations and promotions, but it’s still about passionate support and having a laugh, with no great expectations of events on the pitch. We wouldn’t have it any other way.