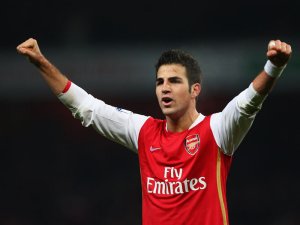 It is strange to see sports stars following other sports.  It is logical really that a professional sportsman will have a favourite team in other sports, such as Alec Stewart supporting Chelsea, or Ursain Bolt apparently supporting Manchester United.  But a footballer following Basketball?  Really?  Too right.

Arsenal skipper Cesc Fabregas recently spoke to the press about his love of NBA.

How big a basketball fan are you and how did you get into it?
Cesc Fabregas: I got into it a few years ago because in Spain it was not really big but after Pau Gasol and some of the players went there (to the NBA) it became bigger and bigger and of course I’ve been following them and of course it is a sport I really like, I admire them a lot and you can always learn from it.

Who are your favourite players and teams and why is that?
Well I always follow the Lakers because they have been better for the last couple of years and obviously Pau Gasol is playing there and Kobe Bryant, one of the best players in the history of the NBA, so obviously that is the team I really follow and Toronto as well because Calderon plays there, another good Spanish player.

Which two teams do you think will be in the NBA Finals this year?
It is difficult for me to say that. All I want is that we can watch a good game and the better team can win it.

And who do you think is going to win?
I watched last year and it was the Lakers but apparently this year they are not doing that well. It is difficult for me to say but we will have to wait a little bit more to say that.

Who is the one NBA player you would like to meet?
I was very lucky that when the Lakers came to London, I met Kobe Bryant and Pau Gasol. The one I wanted to meet the most was Kobe and I met him already but obviously LeBron James and Tony Parker and players like that, they are legends and I would love to meet them one day. 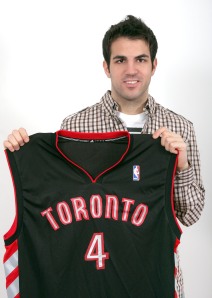 Who will you be supporting at the o2 in March, will it be the New Jersey Nets or Toronto Raptors?
Probably Toronto because Calderon plays for them. I will be supporting and hopefully watch a good game and enjoy it.

Do you actually play any basketball?
No, I am not very good. I prefer to watch it than play it because I don’t have great skills so from the sofa it is much better.

If you hadn’t made it as a footballer, could you have played basketball?
No, I had no chance. I never dedicated enough time to test myself but football has always been my priority.

If you had to compare your football game to a NBA players game, who would it be?
That’s very difficult, a good passer of the ball. I like the way Kobe plays and LeBron James. I don’t know if that is the same in football as my position but I really like their job on the pitch.

And finally are you planning to attend any of the basketball games at the Olympics?
Well I would love to if I have a chance and I’m around here, I would love to go there because I am passionate about sport and definitely basketball is one of them. If I can watch one of the great games they play, I’ll be there for sure.

The New Jersey Nets will make basketball history when they play the Toronto Raptors at the London O2 Arena on Friday 4 March and Saturday 5 March 2011 for the NBA’s first ever regular season games in Europe. Tickets are available at www.theo2.co.uk/