While Dan and myself were doing our research for this trip, we both hunted around various bookshops (both actual shops and online) for guide books to the region, and in particular Doha & Qatar as a whole. I was quite surprised to find that there wasn’t a lot out there for this country, as there seemed to be a guide book for almost everywhere else on the planet. Dan eventually found a small guide book, but that was about it.

Now we know why. If you like shopping, then you will be fine. Prices out here are actually quite cheap compared to back home. For example, taxi fares are really quite inexpensive but agree a price before you get in, and even food and drink is quite reasonable. We have eaten in the hotel on one occasion, and that was expensive, but it was worth every penny. The big shopping malls (and they are big) will keep most keen shoppers entertained for several hours, which is lucky, as most stay open until mid-night. Try doing that at Lakeside.

However, if shopping is not your thing, then perhaps you are a beach person. Many hotels have a private beach, and so you spend your days getting a tan, or at least not doing very much. You may have to keep an eye out for jelly-fish, but there is generally a life guard on duty, and from our time here, the staff at our hotel are more than happy to assist in almost any way that they can.

There are places to visit, but not many. A quick scan of the map showing locations of interest has five listed. I accept that Doha isn’t a huge place, but even so, that isn’t a lot. If you were to be out here for a month, then you will soon be going bonkers. There are trips out to the desert, and I am sure that they are very interesting. We are out here for the football though, and really only want things that are going on in the city.

Just a short walk away from the hotel, and in the north of the city is the Cultural Village. Parts of this are still under construction at the moment, but much of it is already finished. From our walk around, there are quite a few restaurants, although they are clearly catering for the upper end of the market and are quite expensive. This also has it’s own beach, and section of the sea cordoned off.

The Pearl - in theory

A bit further on is the Pearl, which is a recently developed, man made island that is sprouting more high rise buildings and therefore providing the already overstretched Qatari crane industry with more work. This is a residential development though, and again is for the higher end of the market, although this is for non-Qatari’s as well as locals. From the air, the pictures of the place look very impressive, but we tried to walk out there and it’s just not possible. Walking is not a particularly popular thing here, and with no pavements available, we could have tried to dodge the lorries going through, but we didn’t think that this was worth the risk.

We have been out to the Museum of Islamic Art, which is out near the old souq area of the town. This contains some of the items that have been collected over many years by the ruling Al-Thani family, and has many items of Islamic heritage such as ceramics and jewellery. It is a decent place to spend a couple of hours, but it must be wondered how much time most football fans will spend in here. It is free to enter, and once past the obligatory security checks, then as long as you interested in this kind of thing, then it’s a place that you should visit.

Across the road is the Souq Waqif, which is a market full of narrow streets and spice shops. The Souq is a traditional Arabian market, and this is where you can buy almost anything that you want, from fridge magnets (the only place we’ve seen so far that has had them) to spices to traditional silks. The streets are a touch on the tight side, so it is reasonably easy to get lost, but the Waqif isn’t that big, so you should find your way to a main road without too much trouble. There are also plenty of places to eat and drink, so you could even sit and watch the world go by if you wanted to.

Aside from this though, we haven’t found too much else to occupy our time. Apart from getting up a bit later, it’s a good job we’ve had the football, otherwise we would have been struggling to occupy our time for our week out here.

We had met up with a mate of mine earlier in the day, and after collecting his tickets as well as having lunch, we left Will to go to check into his hotel, with the plan being that we would meet up again at the stadium before the game. Upon getting back to our hotel, we had a phone call from Will; he had left his passport in the taxi, as well as his tickets for this and tomorrow’s game. He was now doubtful whether he would be able to attend tonight, as he would have to ring the British Embassy about getting an emergency passport, as well as sorting a few other things out. So Dan and I made our way out to the ground, not expecting to see him until tomorrow.

By the time our shuttle bus made it to the ground about 6pm, we got a text message from Will; his passport and tickets had been found, returned to him, and he was now on his way to the ground. What are the chances of that happening?

This was an important game in the group. With Jordan beating Saudi Arabia earlier in the day, it was important for both of these teams to register a win. Japan had started with a 1-1 with Jordan, and so a win for them was necessary to stay level with them. For Syria, their win over Saudi Arabia had seen the losers sack their coach, and a win for them would have put them into the quarter finals.

This was probably the best game we have seen out here so far. About 45 minutes before kick off, most of the stadium was empty, although the Syrians were starting to fill their section up. By the time kick off came along, the ground was much fuller, with the final attendance announced at 10,453.

The game began and although there weren’t too many early chances, it was one of those games that just seemed to fly past. Before we knew it, half an hour had passed of what was starting to become an excellent game. On 33 minutes we had the first serious effort at goal, when a Japanese corner produced a header that went just wide. We waited just two minutes for the first goal; a defensive mess lead to the Syrian goalkeeper being all over the place, and although he blocked the first shot, the ball fell to Makoto Hasebe, who slotted the shot into the net. The small pocket of Japanese fans went crazy, while the Syrian majority went silent.

The score remained 1-0 at the break, and as we moved into the second half, we had the first of the substitutions for Syria. Off went Samer Awad, to be replaced by Feras al Khatib. Why he didn’t start the game was a mystery to us, as he started brightly, running at the Japanese back line and causing all sorts of problems. As with the first half, the game was moving along at a good pace, and then with 15 minutes to go, it started to even more interesting. 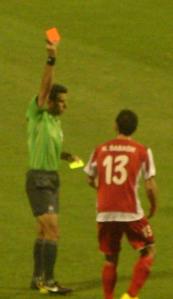 Firstly the Japanese goalkeeper got sent off. As the incident was at the other end of the stadium, we were not sure what it was for, as the linesman looked to have flagged for offside. After a couple of minutes of discussion between the referee and his assistant, he produced the red card, and awarded Syria a penalty. There followed a couple of minutes delay while Japan got their substitute goalkeeper ready to join the game. Once he was on, Shusaku Nishikawa’s first job was to stop the penalty from Al Khatib; his second was to pick the ball out of the net, when the shot just eluded him. This produced celebrations on the pitch from the Syrian players, and pandemonium in the stands, as the mostly Syrian crowd went bonkers.

Six minutes later, and the game changed again. There was an undisciplined hack from one of the Syrian defenders, and Honda went over; another penalty. Honda got up, and put the ball away to restore Japan’s advantage. There were now chances being created, but nothing that looked like changing the scoreline.

With time being added on for the sending off plus several other stoppages, the six minutes announced by the fourth official seemed about right. The fun didn’t end though, until Nadim Sabbagh picking up two yellow cards in stoppage time; the first for a foul on the edge of the area, the second was for a similar offence to the Zaire moment in the 1974 World Cup, which always gets shown in one of those “most embarrassing moments” programmes, when he thought that the free-kick had already been taken and he started running up the pitch with the ball.

With that, the game finished, with Japan ending up as 2-1 winners; they have now got their first win and are back in control of their chances of qualifying for the next round. For Syria, they have to hope things go their way in the last round of games.