Day two saw us watch one of the pre-tournament favourites, Japan and their opening game against Jordan. This shouldn’t have been a bad game, as it is 2nd v 11th in the Asian rankings. However, if we take the world rankings into account, then it is 29th v 104th, so there is a bit of a difference between the two teams. Japan are a known quantity; since hosting the World Cup in 2002, which was their second appearance in the finals, they have since appeared in 2006 and 2010, getting the group stage for the second time in their history last year. Japan have won this tournament three time in the past, and were semi-finalist four years ago. Jordan though, are a bit of a mystery to me, so I am going to be quite interested to see how they do. The Japanese though, have a few injury worries coming into this game, and almost all of them are in defence. This could be quite interesting.

For the second day, we have a new ground to visit. Today’s venue is the Qatar Sports Club which is, after last night’s problems, the nearest stadium to the hotel, and this is just a couple of miles away. This is also the site for the Qatar Open tennis, although they clearly don’t play on the same surface; that would be daft.

We picked up on this yesterday, but thought that it might just be an issue unique to the Al Gharafa Stadium, but it was the same today; there is no merchandise on sale.

I realise that this may not be important to many, but having been to my fair share of tournaments, plus the occasional European Club Final, it is something that we are more than used to in Europe. Certainly in Madrid for the European Cup Final last May, we were able to purchase almost anything we wanted with the competition logo on it. But here, so far there has been nothing.

For a start, there are no programmes. We were informed outside the stadium on Saturday that they were only available in the VIP area, and nowhere else in the stadium. For a few hours at least we were without a programme, although to be honest, we had other worries on Saturday evening. Not for the first time on this trip though, our hotel came to our rescue, as on Sunday morning, they were putting two in each room when they were being cleaned.

There were also no other bits to purchase; no t-shirts, hats or anything. Something with the tournament logo on it would be nice, just to show that we had been here, but no. As we were walking around the City centre mall today, we spotted the tournament ball, but that is it so far. The queue for the ticket kiosk was as long today as it was yesterday, so that was something, but for us at least, we would like some kind of memento of our trip. But enough with the tat talk, back to the football.

Although I mentioned that the queue for the ticket kiosk in the shopping mall was long, they clearly weren’t buying tickets for this one, as the crowd was just over six thousand. Swathes of empty seats greeted the teams as they came out on to the pitch, and although there was an announcement before the game to sit in your allocated seats, the supporters of the two sides seemed to gravitate to where their fellow fans were. In the end, the Jordanian fans were one side of the divide, the Japanese on the other, and it didn’t appear to matter too much where you sat. There was the sight of lots of locals occupying the entire front row around the stadium prior to the game, and then throughout they kept moving around, in what looked like the world’s biggest game of musical chairs. Entry to the stadium is through several layers of security. The first is a ticket check, and then your bag is scanned (similar to the scanners at an airport), before you walk through a metal detector. For entry to the Al-Gharafa, we had our bottle of sunscreen confiscated. Honestly, what harm can we do with a bottle of sunscreen; prevent everyone getting sunburnt?

The next and final layer is the actual ticket turnstile, and we have discovered over the last two days that once through, there is nothing to eat or drink inside this last layer of security. Thankfully tonight we were allowed to go back out, but this wasn’t the case last night. There are clearly issues that need to be addressed in this respect.

Once the anthems were over, myself and Dan moved back a few rows to sit with Michael Stoffl and his fellow Munich 1860 fans. This gave us a slightly better view of the game; the stadium has a running track around the pitch, and although this was covered over, moving meant that we were now able to watch the entire playing area without obstruction.

Japan started brightly, with their latest wonderkid Kagawa providing most of their attacking play. Jordan though began with only one up front, and looked for the few ten minutes or so that they were quite happy to sit and play for the point, perhaps worried by Japan’s reputation as a continental heavyweight. As the game wore on, Jordan started to come more into it, and were now creating the occasional chance, although like their opponents, weren’t entirely convincing up front. As half time approached, the crowd was heavily in favour of Jordan, and as the clock ticked over to 45 minutes, they got their reward as Hasan shot them in front with the aid of a deflection off of Yoshida. This meant that about 65% of the crowd spent half time celebrating their lead.

During the game, Michael had mentioned that he had heard that there would be a kiosk that would be selling merchandise at half time; perhaps our need to buy something would be satisfied? We left our seats and wondered outside and over to the stand. We were the only ones heading that direction, so perhaps the rest of the crowd were not aware? Once over there, we found out why it wasn’t busy; it was stuff to buy, but it was from Al-Jazeera sport, rather than the Asia Cup. From then, we made our excuses and left. 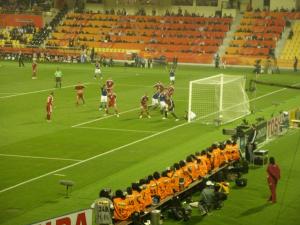 For the second half, we ventured further round the stadium, and closer to the Japanese fans. This gave us an idea view of the goal that the Japan team would have to attack if they wanted to get anything from the game. Although they looked like they had plenty of possession, they were still doing nothing with it, in terms of creating chances. As Jordan tired, Japan penned them back even further, and left themselves open to being hit on the break, which Jordan tried a few times without further success. As the game entered stoppage time, Yoshida headed home to salvage a point for them, and then it looked as though they might actually go on and win it, as they claimed a couple of corners in the remaining time. Unfortunately for them, and to the great relief of a large part of the crowd, there was no further scoring, and it ended 1-1. An entertaining game ended and all could go home (or back to their hotel) happy enough.

With this one being close enough to walk back to the hotel, we dispensed with any idea of getting a cab, and walked. It’s not something that is done here, as we didn’t spot another person walking for the 45 minutes it took us to get back. Clearly the locals all drive, and it’s hot enough during the day at this time of year (it’s winter here as well, and it’s over 20 degrees during the day), to stay out of the sun. If anyone ventures out here in 2022, you will soon find this out.