So last month we covered some of the best places to go in Europe to watch football. Hamburg, Stockholm, Copenhagen and Cologne all scored very highly from our expert panel, but what about places to avoid? Well here we present our bottom 6 places to avoid in watching football in Europe…be prepared for a surprise or two…

Paris – I cannot tell you how much I hate Paris. Having had the (dis)pleasure to have to travel there for work I experienced frequent public transport strikes, pickpockets, rude locals, crap weather and even worse food. And as for the football – well PSG is OK I suppose but I have never seen a dump like the Stade de France. Toilets overflowing with piss, food that smelt like horse manure and riot police firing tear gas into the stadium from outside. I could go on for ever about my bad experiences in Paris but we have 9 other places to cover – so head over here to read more.

Barcelona – If people thought I was mad to suggest Paris, then they will think I am absolutely crazy to suggest Barcelona but I have very good reason to. I consider myself to be “worldly wise” and travel savvy. I have lived and worked in 5 different countries in the past ten years. I have also lived in some of the most crime ridden areas of London, yet I have only been pickpocketed once and threatened with a knife once – both times in Barcelona.

When England played here against Andorra it is fair to say that one in every five fans was robbed, mugged, beaten up or scammed whilst in the city. And some, like myself, in broad daylight on Las Ramblas, one of the busiest thoroughfares in the city. One one occasion I was carrying Lolly (aged 6 months) in one of those baby pouch things – such trivial matters wasn’t an issue to my potential attacker.

But what about the football I hear you ask? Trust me a seat in the top tier of the Camp Nou and you could be watching anything as you are so high up. Want a ticket in the lower tier? Then be prepared to pay through the nose for the pleasure. Thankfully, RCD Espanyol have now moved from the Olympic Stadium which had some of the poorest sightlines know. Sure, the city has sunshine, tapas and plenty of bars but just be very very careful where you go.

Minsk – I’ve been to plenty of strange places to watch England play, but without a doubt one place I would not go back to is Belarus. What was wrong with it?

Nothing….that is what was wrong – there was nothing to see or do once you get to Minsk. When England played here virtually every bar and restaurant ran out of food and drink. Six hours before the match, having only been in the city for a few hours we were so bored that we ended up back in the hotel, drinking something called Splotz, watching Snooker on TV with German commentary. Security at the Dinamo Stadium was hot with three different search points. And “search points” in any former Russian country actually mean “bribe station”. Not to worry because once we got through they had laid on whores outside the temporary toilets for your delight. Want more reasons? Head off to here to read more.

Next up we have our resident Croatian expert, Michael Hudson with three more forgettable trips to the old Soviet Bloc. 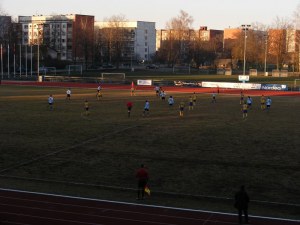 Jūrmala – Jürmala is a kind of Baltic Riviera, twenty miles of white sand beaches fringed with pine trees and wooden houses that was once the holiday resort of choice for everyone from Tsarist nobles to Leonid Brehznev. Or at least it is until you reach Sloka, where you’ll find the hulking remains of a Soviet cellulose and paper plant, block after block of ugly, grey apartment buildings and the Slokas Stadionā, home ground of mid-table Latvian battlers FK Jūrmala-VV.

Watch the game from the single stand or, as most of the locals do, through the wire fence that surrounds the rest of the cabbage-patch playing surface. With no beer on sale inside the ground and bag searches conducted by black-suited bouncers, your best bet for a pre-match drink is in Majori, ten miles back towards Riga on the electric train. 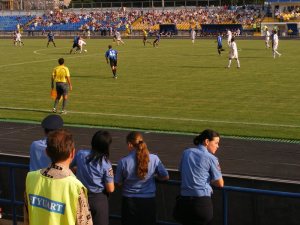 Odessa -Odessa’s a vibrant, cosmopolitan port city with cheap beer and Ukraine’s best nightlife. Unfortunately, its football team is absolutely rubbish. Relegated on the final day of last season, Chornomorets are currently playing at a council-owned athletics stadium while their old ground is being redeveloped.

Ticket prices are around two pounds, though you’ll want to pay extra for some newspaper to spread across your seat before you sit down. Crowds are small and the football so bad that one English fan called last season’s goalless draw with Vorskla Poltava “the worst game I’ve ever seen”…..And he supports Hartlepool United.

Daugavpils – It takes over four hours to get from Riga to Daugavpils, Latvia’s second biggest city and the last jumping off point before the Belarusian border. From the moment you step off the train, there’s a sense you’ve arrived in the back end of nowhere. “Why do you want to go to Daugavpils?” a friend had asked back in Riga. “It’s cold, dirty and full of pickpockets.” “Have you ever been there?” I asked, trying to hide the heard-it-all-before tone in my voice. “It’s my hometown,” she replied. I didn’t bother asking if she was much of a fan of Daugava Daugavpils. 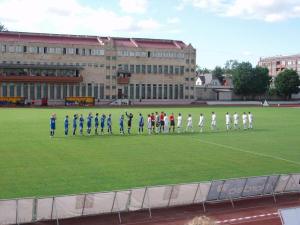 Daugava used to have two teams. But then Dinaburg FC, who’d played both Barry Town and Hibernian in the preliminary rounds of the UEFA Cup, were expelled from the top league over suspicions of match fixing, and FC Daugava Daugavpils, who’d only finished ninth, were promoted in their place under the infrequently used ‘geographical rule’. Daugava play at the imaginatively named Daugava Stadionā, which is rather unhelpfully located on the very edge of the city, near a river and the remains of a Soviet aviation barracks. Their average attendance is around two hundred fans. Drink in Gubernators, a posh cellar-pub opposite the city’s university, or Vesma, a café bar on Rigas ielas. And try not to miss the last train back.

I am sure there are hundreds of other venues that are simply to be avoided and as democratic chaps we are always interested to here you views, so the floor is yours…