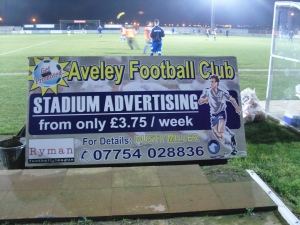 A couple of months ago we stumbled across a Monday night game across the river at Aveley.  The game was in the Championship Manager Cup, a trophy for the Ryman’s League teams.  Eidos had kindly sponsored the trophy, which on a good day we see 150 people paying to watch a cup tie.  The cup final, played in March was won by Ryman’s League One side Leatherhead who beat Wealdstone from the league above on penalties.  But you may have missed some significance in the whole Championship Manager story.  Let me take you back to the beginning.  Are you sitting comfortably?  Then I shall begin.

Once upon a time there was a young man called Kevin Toms.  Some of you (probably those over the age of 35) will have known his product very well indeed.  To others the name will mean nothing, but I bet if you a) Own a PC, PSP, Playstation, X-Box or Wii, b) love football and c) Do not have a demanding wife/partner you will have heard of Championship Manager.  Probably only rivalled by redtube.com as the most fun you can have on your own with a PC, Championship Manager gives us all an opportunity to be Sir Alex Ferguson, Jose Mourinho or Gianfranco Zola (unfortunately the “alleged” nocturnal activities of a certain manager cannot be re-created in the current versions of the game), starting with the lowest of the lows and rising to the top.  My record was taking Grays Athletic to the Champions League final in my 27th year on the game.

So who is this Kevin, and what relevance does it have to the game?  Well, Kevin Toms developed the first ever football manager simulation game for the ZX Spectrum back in the very early 1980’s.  In the game everyone the opportunity to manager a team, and watch the game unfold in pure two dimensional unadulted by advertising green graphics.  Want to see what kept us in our bedrooms for so long at the time without a staple through their naval? Well you can still play a version of the game by clicking here.

And we are very lucky to have tracked Kevin down.  In the cyber word it actually wasn’t that hard.  A simple Uncle Google search for “Kevin Toms + Football Manager” returned as the top item a blog by the man himself.

So we fired up our old ZX Spectrum with its rubber keys and posed some questions to one of the pioneers of the computer age. 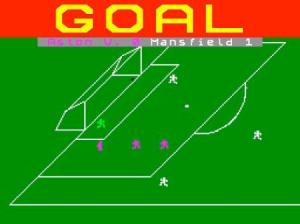 Morning Kevin.  It’s great to finally meet a man who kept me away from so much of my homework when I was at school.  Was Football Manager the best fun a teenage boy could have on their own in the bedroom in the early 80’s?
The best pure fun perhaps! I think maybe it did what it was supposed to do, created a world in people’s imagination that they could take part in.

There was really nothing else like it at the time.  Flight Simulator was the only real strategy game at the time so what inspired you to write the game in the first place?
I loved creating all sorts of games as a kid, and for some reason always wanted to crack creating a football management game. It was not easy.

Bill Gates apparently put little “cookies” or deliberate bugs in some of his earlier coding. Did you put in any little bugs so that people could cheat to win the league?
Never, I am too much of a games design purist. I want the game to be a game I can play and enjoy myself, with no significant advantage over other players. – That is my ideal.

When did you first realise that you had a hit on your hands?
Quite quickly, the first orders came in quickly, but probably when the big chain stores started stocking thousands was the real point that I knew.

There were some other big games out at the same time.  Did you ever think about putting Manic Miner or Jet Set Willy in the game as players?
No, but who do they play for? :-)

When I was in Game earlier this week I counted six different football manager style games available for the PC.  Do you look at the current crop of games such as Championship Manager and think “I started this craze?”
Uuuh yes, it seems to be so.

As I travel alot I would be lost without my PSP with my record breaking Grays Athletic teams progress. Do you play any of the  Championship Manager games yourself?
No, I am too busy writing a game to play much.

What are you up to nowadays?  Are you still involved in the computer industry and programming, sorry, software development?
Most of the time I do two main things. I am a Software Architect helping big companies with business systems, and I am writing a Football Manager game of my own for the iPhone.

Was the original game written in Basic? What is the equivalent complexity in comparing languages such as php or .net today? (I could go on about Agile technologies as well just to show off)
Yes, it was. A strategy game is not suited to assembler programming like Space Invaders! PHP is similar.  .net is not a language in itself, it’s a framework you can target with different languages, including Visual Basic!

At the time the place to get your software was in the high street chains such as Woolworths and WH Smiths.  How did you go about marketing your product initially?
By placing quarter page ads in computer games magazines. By writing a good description of the game. By using real letters of players in the advertising, and by attending computer games shows.

The Spectrum was the biggest selling home electronics item of the early 1980’s and was the brain child of inventor Sir Clive Sinclair.  Did you ever meet Sir Clive? Did he thank you for increasing the sales of the Spectrum almost single handedly?
Yes I did but at an event that was nothing to do with computers. I shook his hand and spoke to him, I doubt he had any idea who I was.

Nowadays piracy is a massive issue for software houses as the internet is essentially an unpoliced ghetto.  How much of a concern was this back in the 1980’s especially when the dual tape deck was brought out enabling “tape to tape” copying of software?
It was depressing at times. The Amiga version had sales pirated out of existence. At the point I first started at the beginning of 1982, piracy was unknown.

You must be a football fan to have gone into so much detail.  So what team do you follow?
I follow a number of teams from places I have live. Originally Torquay United and I still watch their progress.

The current range of PC games are pretty comprehensive – in fact perhaps a little too detailed to really enjoy all elements.  What do you see the future of online football management games? What other features could be brought in?
It’ll get more like PC and console games. The network will converge with the desktop.

After playing the game for a year or so I felt that I could manage anyone.  In fact when Ron Greenwood announced he was stepping down as England manager in 1982 I wrote to Jim’ll Fix It and asked if he could fix it for me to be the next national team manager quoting my Football Manager experience.  Did you watch football in a different way after the game came out?
Yes, and ever since. I have a more analytical view, and when I have coached or managed teams it has helped.

It is an in joke at some clubs how players today play games such as EA and PES as themselves.  How did it feel that real life footballers used to play the game to manage themselves?
An honour.

Did any players ever get in contact to convince you to make their online profile better?
No.

These days the likes of EA Sports use some of the world’s best players to advertise their product.  In the age before agents, did you ever approach a player to endorse the game?
No.

And as soon as we had started our dial up line dropped out and our connection was dropped.  We seriously encourage you to try out Kevin’s original game by clicking here and for those of you with an iPhone, keep an eye out in the Apps store for his new project once it is ready.