Can you imagine Manchester United playing Chelsea in a home game at The Emirates, or West Ham playing Everton at Anfield?  It simply would not happen unless there was a blooming good reason such as some ground redevelopment going on.  Well those crazy marketing people at the Twenty20 just keep the silly season going a bit longer.  We’ve had players wearing microphones when they have been batting or fielding, we’ve had the “lets win a seat in a jacuzzi on the boundary” and this year we have seen the introduction of the dancing “girls”.  So why now do we have the equivalent of the Premier League’s game 39?  The “not at home, home game”.

Step forward Kent Spitfires.  County Ground – Canterbury.  Lovely cathedral city in the garden of England, some 60 miles from London.  And therein lies the issue.  It is too bloody far away from London.  The ideal market for Twenty20 are lads, wanting a few beers after work.  Unless you take a half day you are not going to get down to Canterbury for a 5.30pm start unless you take a half day.  So here is the solution – play the game in London!

Not that I am really complaining of course.  With the chosen venue, the Oval just a beamer away from the office I was guaranteed to be there for the toss.  Twenty20 transcends across all types of people and so CMF’s office had also decided to travel UP from Kent to watch the game.  Who was I to argue – I would get to go out with suitable chums (Mr Grumble of course being one and a guest appearance from Barnet John) for a few beers, whilst being able to lovingly gaze into the eyes of my wife.  Or more likely she would be frowning back at me for being “embarrassing”…Lets just see shall we once that pint of Pimms has been finished!

The Twenty20 season hadn’t been good for Kent at all.  In my two previous visits to watch them they had been crap and came into this game bottom of the league and with little chance of making the quarter finals.  Strange considering they had pulled off the result of the season just three weeks ago, scoring 194-1 against form team and favourites Sussex at Hove in a 27 run win.  But on a scorching hot day in London, my money was on an Essex win.

Kent Spitfires 171-6 lost to Essex Eagles 174-6 by 4 wickets – The Oval – 9th July 2010
Well I was right – they did lose but this was actually a decent game.  Kent started slowly, losing key batsmen van Jaarsveld and Jones cheaply.  Denly kept up a run-a-ball rate for his 35 but it was the presence at the crease of Stevens that accelerated the Kent score as he hit 50 off 26 balls, ably supported in brief cameos by Blake and Coles who hit 17 and 16 respectively with strike rates well above the 100 mark.

No game is complete at the Oval these days with an appearance of the fox, and for me it was the fourth game in a row where he had wandered out onto the outfield, completely oblivious to the game or the crowd.  How long before he ventures onto the square I wonder?

Talking of the crowd, it looked like the experience was a mild success.  Interestingly it was £5 cheaper to watch than a game at Canterbury for those fans paying on the day and a crowd of 6,000 on the hottest evening of the year isn’t bad I suppose.  In my view cricket is trying to milk this for all it can at the moment and £20 is still too expensive based on the number of games teams are trying to play in a short period.  For the whole Fuller family to watch a game at Canterbury, including master Zafira it is £80.  Some counties charge less (notably Middlesex for their games at Uxbridge it would only be £45).  But it is the cost of everything else.  A burger at the Oval is a minimum of £4.50 – want one with BBQ sauce and a slice of bacon – well that would be £7.50 sir.  And the bars?  well it would help if they actually kept them open throughout the whole game so that people didn’t spend 30 minutes queueing and thus missing the action?

The average Twenty20 score in England is 154.  So Essex had to go at over 8.5 and over to reach the Kent target.  They started off well.  Bopara and Cook put on a swift 50 for the opening wicket before Bopara went for 36.  Cook always seems to bat well whenever I see him and today was no exception as he scored 51 off 36 balls. Batting partner Pettini also matched him in terms of score and balls faced and when he departed at 146-4 it looked as if Essex would coast to victory. 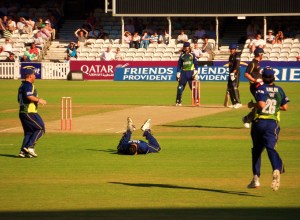 Then the game swung back to Kent – Azar Mahmood came back with two very cheap overs and Essex were up against it – needing 25 from two overs.  However, at one end was Scott Styris – a man who was having a magnificent season, perfectly summed up by his performance last month against Sussex when he scored 106 not out from just 50 balls (including 8 sixes) at Chelmsford.  Tonight he was more modest, but his 25 from just 13 balls set the finale up perfectly.

One over to go.  Mahmood to bowl it.  Essex need 4 to win.  First ball is a dot ball.  Second is a single to Flowers.  Third ball is a wide and then Foster still facing his first ball is clean bowled.  Three balls to go, two runs needed.  Philips facing and he puts bat to ball and finds a gap on the offside and the ball races away for a four.  Game over.

So Kent CCC – did it work?  Will some of those 6,000 now come and support the county down at Canterbury?  I would say over half of the crowd were actually Essex fans so in some ways it played into their hands.  But who am I to argue.  I paid my £20 to line the commercial pockets and I actually had a jolly good evening.

More photos can be seen here.