So a quick summary of the day so far…you left us after episode 2 with us jumping back onto the train at Helsingør after our trip across the Oresund to Helsingborg.  Beers and comfy seats secured, we kept an eye on Facebook updates from contacts in and around Parken just to make sure we would not be walking into a war zone.  The Brondby fans had marched from the city centre, proclaiming their V for Vendetta flags after some unsavoury incidents at previous games between the two, but we hoped tonight we would simply see some decent football and a cracking atmosphere.  The walk up Østerbrogade was relatively quiet considering such a big game was less than an hour away.  No police presence, and people going about their normal Sunday business (It was only later when we saw some of the pictures and heard about some of the trouble). 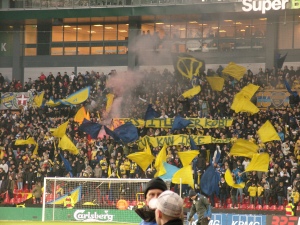 Security around the stadium was light as well, and we passed through the ushers without so much of a frisk, which was handy as I was loaded with fisk – the liquid version of Fishermen Friends in a test tube – for our halftime entertainment.  Notice I said “usher” because that is what it felt like.  We entered the “concourse” area which was carpeted and surrounded by curtains, with people queuing at the concession stand for their “menu” choices.  We plumped for Menu 1 which was simply Four Carlsbergs, and certainly no FCK crisps and popcorn, and headed up to our seats in the second row for a great view of the pre-orchestrated fans displays, starting with the FCK fans “raise the flag” and the Brondby flag waving.  The fans did themselves proud during the game, but I was disappointed that there was so many empty seats.  I had been led to believe this was the “big one” and would be full to busting, but there was plenty of seats available at either end.

In the end it came down to two bits of luck for FCK.  Sure they were probably the better team overall, but neither team really created a chance in the first half.  We sat freezing at pitch level surrounded by shirt-clad supporters from both teams (and even a Manchester United one thrown in for good measure), again dispelling the “hate” between the teams.  If someone turned up in the Bobby Moore Lower with a Rochdale shirt on, let alone a Millwall one an ambulance would be called for them within seconds to take them home.  It was also relatively well behaved on the pitch too with Denmark’s top referee Claus Bo Larson failing to have to get the card out in the first 45 minutes.  It took us all of 45 seconds to get the Fisk’s out at half time down in the cinema, warming the cockles on a freezing cold night.

The second half started with a fantastic display of flares from the Brondby fans that was reminiscent of the last Milan derby I went to.  Smoke hung in the air as the game kicked off again, but the players seemed unaware of the work bragging rights riding on the final score.  Seventy minutes in, and still no chances of note before Brondby gave away a free kick right in front of us.  Up stepped Martin Vingaard (a literal translation of Martin Vineyard by the way) from 25 yards to curl the ball over the wall.  The Brondby keeper, realising the ball was heading for the back of the net back peddled and only succeeded in tipping the ball onto the bar/post and back onto his head and into the net.  The home crowd exploded in delight and the players ran to hug us – well almost and we got the perfect shot or two for the photo album.

Brondby tried to step up a gear, but in keeping with the rest of their season so far when it mattered they simply could not raise their game.  Coming into the derby they sat 12 points off top spot in 6th place and really needed the win, or at least a point.  It was not to be as in the final minute of four in injury time William Kvist’s shot from just inside the box took a wicked deflection and the ball sailed into the net.  The Brondby fans took this as their cue to leave, and decided that it was a bit chilly so they make a fire or two in the away end.  And did the police/stewards/firemen come running?  Er no, they simply stood around as if it was a normal occurence (which of course it may well be).  We waited for the players to come round to thank us for coming over from England for the game (what?  they don’t all read this blog?) before heading out to meet Ivar, a second generation FCK fan who took us under his wing for the night.

We headed across the road from Parken and into a Tardis-like bar where his chums were waiting for our safe arrival.  Chums who supported either team I hasten to add.  In the course of the next four hours we indulged in numerous Carlsberg Paskebrygs (Easter beer), more shots and general revelry where we found out lots of home secrets about our new found friend (read more here) as well as a few new ones including Brian “The Beast” Jensen’s brother no less, who introduced himself to us by mooning from the pool table.  They make ’em tough out here.  And then it was time for Danny, Deaks and Stu to wander on back to the bachelor pad before an early morning flight to good old blighty.

A successful trip all round I would say.  As you know, dear readers, I love a bit of Scandinavian action, and three games in just 24 hours has been easily doable, and enjoyable.  In fact, as is always the case, it was the football that let itself down and not the fans, the beer or the general good times had by all.

Want some more?  Well have a butchers at the EFW version of the day here.