In the 2002 Only Fools and Horses episode, Strangers on the Shore, Denzil and Trigger are sitting in a lorry in France, waiting for Del and Rodney and are chatting about life and woman.  Denzil asks Trigger about why he hasn’t got married.

“I have always had this image of my perfect woman, my dream girl…”

“She’s nothing to look at, very plain.  Little scar on her chin where she had a wart removed.”

We all have our dreams, hopes and aspirations.  Some will happen, some may happen and some are simply pipe dreams.  We have focused on Maidstone United’s plight before our visit last wekk and their aspirations of moving back to their home town, some twenty years since they left,  into a stadium of their own.  Talk is cheap and the club have seen so many false dawns with local politicians making promises about “Bringing the Stones back home” which they have failed to deliver on (a politician lying? never!).  So when something new is announced, everyone sits up and listens….So ladies and gentlemen I give you the Virtual Stadium.  The what?  The Virtual Stadium – and you can drink virtual beer whilst watching the virtual game.  The concept is simple.  The club are asking fans of football to buy a virtual seat in their online stadium to help raise money for the plans to build a new stadium.  Press coverage so far has been very positive.  Non League news picked up the story before Christmas (here) and in Kentish Football (here).  Maidstone fan and creator of the scheme Jamie Barber takes up the story…

So what’s the Virtual Stadium in aid of?
“Put simply, we’re trying to return Maidstone United back to Maidstone. After 21 years of ground-sharing (including an unpleasant period going bust and reforming), the future of the club is hanging in the balance with no ground to call our own. We have planning permission and a long-term lease for a ground at James Whatman Way in Maidstone – we’re just short of the funds to build it. The supporters have been set the task of raising £250K and the Virtual Stadium is one of the schemes set up to try and achieve this. For more details, please visit the official Bring the Stones Home website.”

How does it work?
“Simple. You choose the seat you would like from the Virtual Stadium Seating Plan on the main page (maybe you want a seat next to one of your friends or a supporter of your club – you can search for friends or fellow supporters using the ‘Search Crowd’ link). Then follow the links through to the payment page and fill in the details, including the message you would like displayed on your seat. You can upload a message and image if you like – you can change either of these at any time. If you are an advertiser, just click on any of the ‘Corporate Sponsorship’ links and send us your contact information – we’ll be in touch to discuss the details like logo sizes and website to link to. If your company is able to provide a product or service that could be useful in building the new stadium or promoting the Virtual Stadium, we may even be able to do something on rates. We’ll try and get your company logo uploaded as quickly as possible.”

Why should I buy a seat or piece of advertising?
“The way we see it, there are four principal reasons:

a) Financial for you! Give yourself up to 49 chances to win £1000! Every time you purchase a seat you will be asked a simple multiple choice question. Get this right and your seat is entered into the Grab A Grand draw every time we reach a ‘Thousand-Seat Milestone’. You get entry into more draws the earlier you join (so if your seat is in the first 1000 sold, you’ll get 49 chances if every seat in the Virtual Stadium is sold). If you want more entries, you can simply purchase more seats from your Profile.

b) Financial for your company. The Virtual Stadium is a brand-new concept which hasn’t been seen before. Because of this we are hoping to generate a substantial amount of publicity. Purchasing advertising on the site gives you exposure to all of the visitors to the site (you can see exactly how many by checking the ‘Unique Hits Since Launch’ counter on the front page of the site (above the stadium image). We have different advertising options available giving different amounts of exposure to suit all budgets.

c) Interest. As a member of the Virtual Stadium community, you will have access to a whole array of online features, many exclusive to the site. As a taster, we are offering exclusive video highlights, interviews (some live) with Stones names both past and present, games to while away an hour or two as well as the opportunity to chat with fellow members. And we’re also running a Referral Scheme where you can win prizes if you refer the most friends to join the site.

d) Emotional. Be a part of internet (and football) history. Remember, you will be playing a key role in keeping alive a football club for which your efforts will be forever recognised. It doesn’t matter if you’re a Maidstone United regular, sometime away fan, an occasional supporter from the old days of London Road or even if you have no intention of setting foot in a football stadium, your role could be crucial in the survival of the club.”

What are you going to do when the Virtual Stadium is full?
“The intention is to release funds for the construction of the new stadium at James Whatman Way as and when we reach critical milestones (for example, enough to build an electricity sub-station). Once the Virtual Stadium itself is sold out and JWW is built, we plan to put our feet up and have a beer.”

How has it gone so far since launch?
“What a great start to the launch of the Maidstone United Virtual Stadium with over £1800 raised in the first two weeks of launch! There’s been a lot of work going on developing the idea but it finally launched yesterday and has already attracted over 4,000 hits. This is the ideal opportunity to get the people of Maidstone involved in building the new ground, so get referring people to the site and we hope to follow this up by doing one or two roadshows in the town to further increase the profile of this campaign.  The idea is pretty unique and we hope that it will not only attract the attention of the population of Maidstone, but also further afield and fans of other teams. So please do all you can to spread the word and the idea could teally take off.”

How did you get involved in this unusual and unique project?
“In terms of background, I accidentally got elected onto the Fund Raising Committee after a beer too many away at Canvey Island last season. I got together with some other friends (notably Jonathan Parr) who work in the online industry and we tried to come up with a way of generating money and publicity from internet users and fans of other clubs, as well as the people of Maidstone. The result grew from an online guestbook (though we struggled to see how it would raise the much-needed funds) to the Virtual Stadium you see today.

Then we had the issue of technical expertise. While we were able to come up with the concept, we had none of the requisite IT expertise to physically build it. By sheer luck, the club had been approached by a Database Designer and E-Commerce guru by the name of Steve Savage who offered his services if the official website needed overhauling. I was put in touch with Steve to see if he would be interested in helping build the Virtual Stadium and the rest, as they say, is history. The entire project was about 10 months in the actual building.”

We are pleased to back such a great scheme and have purchased two seats, and we urge all football fans to go to the website and buy your seat.  £6.99 is the price of a beer (well , here in Copenhagen it is!) so forego that last pint and help a football club in need. 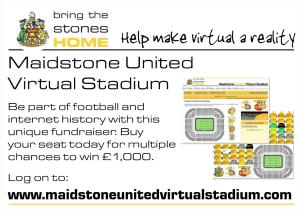