So the long wait was over.  After a long end of season break of, erm 13 days, Lolly and I were ready for action.  As luck would have it Grays and West Ham are her two favourite teams, and when I told her we would be skipping down Clarence Road to see them she could not have been happier.  Things had not gone too well for our cousins in Essex since our last visit in the FA Cup qualifiers back in October (see post here), and there was a real danger than when the squad met for pre-season training there was no more than a dozen in the squad.  ‘Our Barry’ had headed off, touted around Europe’s more cultural high spots with his girlfriend and mother-in-law.  The club itself had teetered on the brink for a few days.  They had narrowly missed relegation from the Blue Square Premier League, more to do with the poor form of Weymouth and Woking rather than their winning streak.  The club were subject to a number of take over rumours before old chairman Mick Woodward annunced at the end of June that he was stepping aside for a new board of directors headed by John Moncur.  Yep, super Johnnie Moncur the ex-West Ham midfield maestro who was once sent off in a cup tie for the Hammers against Macclesfield after getting three (yes three) yellow cards in three minutes after coming on as a sub.  Two for fouls and then one for dissent after the referee hadn’t actually realised he had already booked Moncs.  Moncur had promised to redevelop the club from the academy upwards and immediately put a notice out that the club were looking for players and invited people for trials.

I was well up for this challenge.  At 39 years old I may not be up to Premier League class but I could still do a job for a team.  Unfortunately the trials co-incided with my weekly lumbago treatment so I was ruled out for the forthcoming season.  It was hard to see how successful the idea had been.  Just two days prior to the game, the official squad consisted of just 6 players.  With the squad numbers 2 to 7, messers Haswell, McLeod, McKie, McKoy, Dos Santos and Makofo must have been struggling with plan A let alone B or C for the game against West Ham.  To add insult to injury Zola decided to rest most of the first team squad, only bringing along Kieron Dyer, James Collins, Henri Illunga and Jack Collison from the matchday team…Oh and Danny Gabbidon.  Lolly had been a West Ham fan for over 18 months, attending games regularly yet she still had no clue who he was.  Just three years ago our Danny had been voted Hammer of the Year, but since then he had played  just fifteen games, sidelined by injuries to all parts of his body.

Sunday afternoon is not exactly prime football time, but with any addiction you take your karma any time you can.  The other Fuller’s were dropped off at the cathedral of shopping, Lakeside and we were in the tidy little ground thirty minutes before kick off.  Grays had made this game all ticket, although at £20 for admission I fail to see how they could justify a 100% price hike for this one.   The West Ham fans had come out in force, filling the end behind the goal plus the small portion of the stand they were allocated.  All of them were hoping to see at least a few of the first team players, so it was disappointing to see so many famous faces missing.

I gave West Ham friendlies a miss last season.  Under Curbishley the thought of seeing us playing a meaningless friendly was too dull to contemplate.  The previous season I had seen us play Dagenham and Redbridge in our first pre-season, so Rob the Red, Dagenham Dan and myself turned up to see a rare appearance from the lesser know FitagainDeanAshtonasaurus, returning from another long term injury.  West Ham had just launched their new kit, made by Umbro, but had forgotten to pack it for the 4 mile trip down the road and so simply wore a plain blue training kit with ironed on numbers.  At least today they had managed to find the new kit, but the swapping of shirts at halftime did confuse us fans – for instance Savio appeared wearing number 11 at half time but in the first half it was worn by Zavron Hines.

I like Essex.  I like the people, the way they approach life and also some of the places.  There is no false pretences here.  Sure they have a reputation as geezers and blonde bimbos but people from Essex are welcoming, kind and like a laugh.  The fans out for this game certainly met all of those categories, making room for Lolly to see the game and letting me off 50p when buying a programme as they didn’t have enough change.  So top marks there Grays – nice people, nice place. 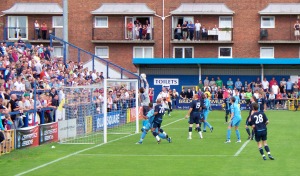 West Ham started with James Collins and Faubert at the back, and Kieron Dyer and Zavron Hines in midfield.  The rest of the side was a mixture of youth (such as Bondz n’Gala, Matty Fry and Anthony Edgar) plus some players who were at the fringes of the first team squad last season (keeper Peter Kurucz, and Josh Payne).  But they started well.  Even against such lowly opposition Zola had drilled his team to play the ball short and to feet all of the time.  Edgar and Hines combining well down the left with some lovely one touch play and even Faubert, harshly rejected by Real Madrid (I mean a choice between Julian or Ronaldo as an attacking left sided player is hardly a choice is it!) was getting forward and putting in some excellent crosses.  It was only a matter of time before the first goal came, and come it did on 15 minutes as Edgar played in Hines and he side stepped a challenge before slotting the ball home.

It certainly seemed as if West Ham were taking this seriously, so nobody expected Grays to get back into the game so quickly.  Seven minutes later Jamie Slabber (a hero for me for Grays in Football Manager 07) beat James Collins to a loose ball and rammed it home, much to the delight of the home fans.

Grays has some of the most exclusive and expensive seating in the whole of English football.  Overlooking the group (see the picture above) are six flats with balconies that offer a perfect view of the action.  Last year one of these properties was sold for £147,000 making it the most expensive seat in England.  However, as the viewing area is outside the football ground you can, of course, drink, smoke, fornicate and do all of those things that in theory you cannot do inside the ground with fear of prosecution.  The fans were out in force on the balconies and were more than chuffed with the Grays first half performance.  West Ham’s stars of the half were definitely the front pairing of Edgar and Hines, although watch out for 16 year old Eoin Wearen in the coming years, just like yours truly said when he saw Collison play two years ago in pre-season.

So 1-1 at half-time and Lolly was praying for an appearance from Carlton Cole in the second half.  Instead we got ten substitutions from the Hammers, with only Edgar retaining his place.  A big cheer went up for Danny Gabiddon, although you would have thought that having not played for nearly 2 season he would have been on the pitch when the game re-started, but the Welshman had forgotten how to defend and went back into the dressing room briefly to look for it!  Collison and Stanislas bolstered the first team players.  The only goal of the second half game when the rain started to fall with Cristian Montano slotting home after the Grays defence had dithered.  West Ham made a final change, sending on 15 year old Robert Hall, no relation to Richard Hall who West Ham purchased in the Redknapp era for £1.4million (then a fair sum of money).  Hall (Richard) was a very promising centre back who injured his foot in a pre-season game at Carlshalton in July 1997 and essentially never played football again.  Redknapp of course expressed regret at this, blaming everyone else despite the player having a history of injury problems.  Still no change there then.  Robert Hall, despite only being 15 has been capped at England Under 17 level and has a bright future in the game, and has been spoken about in the same vein as a young Joe Cole.  He came close to a goal on a couple of occasions, and helped set up Illunga for his goal that was then ruled out for offside (queue the “Another one bites the dust” music – why???).

So a 2-1 win was satsifactory.  Only Boa Morte and Savio didn’t get a run out and all looked comfortable and more importantly fit.  The Hammers were now off to Austria for their training camp, with games against Werder Bremen and Bursaspor amongst others in the local park (honest!).  Grays were still building their squad, with a number of players on show essentially on trial as they look to beat the bookie’s tag as one of the relegation favourites.  Season 2009/10 was underway!

A one sided game?

A nice setting for the first game of the season

Ready for a pitch invasion

An equalizer against the run of play

Stanislas puts some effort in