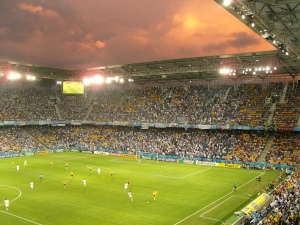 Salzburg – Tuesday 10th June – Greece v Sweden
When Greece were made one of the two first seeds for this tournament (after Austria and Switzerland), everyone wanted to be drawn in their group. However, when the dust settled on Group D there can be few who could call it with ease as all four teams have a chance to progress. The every improving Russia are so reliant on their midfield maestro Andrej Arshavin, who will be missing from the first two games and so they may struggle in the early exchanges. Perernial under achievers Spain have at last found the attacking balance that should see them reach at least the last 8. Greece were written off as fluky winners 4 years ago but bounced back from missing out on Germany 2006 to dominate their qualifying group, and finally Sweden have been bouyed by the return from his 2nd international retirement of Henrik Larsson to partner one of the most impressive players in Serie A last season Zlatan Ibrahimovic.

So – not the easiest trip in the world to arrange. I ideally wanted to take just one day off work so I booked a ridiculously early flight back from Munich (90 miles west of Salzburg) at 6.30am so that I could be back at Essex’s finest by 7.30am (although in reality due to the unbelievable queues you having entering your own country that would more like 8.30am by the time I got back to th car). So at 4am I was up and on my way to Stansted for my monthly slice of customer service Ryanair style. Having become quite an expert in Customer Experience now it amazes me how that airline can keep on going judging by the number of complaints it receives (the one I love the most is that it refers to passengers as SLC “Self Loading Cargo”..brilliant). On this occasion apart from the continuous trace music they play when you board the flight advertising their “bullseye baggies”- come on it is 6.30am who, apart from the Scots, will want a double rum and coke at this time!, and when the stewardess woke me up to ask if my magazine I was holding was rubbish (yeah thanks for that – and guess where I have stuffed it now!), it was relatively uneventful. Not suprisingly the flight was full with Swedes and Greeks on their way out to the game.

With nearly 12 hours to kill, and only 4 hours sleep behind me I was at a loss initially what to do. I had investigated the cinema which could prove a good venue for a few hours sleep, but instead decided to see the bits of Salzburg I had not seen. That mean breakfast at Hangar 7 – the home to the Red Bull racing team, and quite a fine place it is to. Very trendy and artistic perfect for a sweaty Brit.

After my fill of German bread and meat I headed to the stadium. Public transport in Salzburg is easy, and so within 15 mins I was at Salzburg Europark, the huge out of town shopping centre, with an Ikea and the train station that would be my departure point later for Munich. What immediately struck me was how there was no signs for the stadium. Having been here only 9 months ago I know where the stadium is, and the station is no more than a 10 minute walk away, but the locals, in keeping with the rest of the tournament, had decided that such signs were an irrelevance. Twenty minutes later I reached the stadium, but from there it was so badly signposted that it took a further 20 minutes to find the media centre.

After a couple of hours cool recuperation on a day when temperatures hit 20 degrees in Salzburg I headed for the FanZone in the city centre. The centre of Salzburg is not particularly big and it had become overrun with Swedes. Big Swedes, small Swedes, fat Swedes, thin Swedes, drunk Swedes, and very drunk Swedes. Now the Swedes rank up their with the Estonians and the Danes in terms of beauty and what better way to show off their fine figures than dressing in football kits. Always does it for me, but that is for another day and adventure. The Greeks were small in number, hairy, fat and ugly. On the huge stage were an Abba tribute band getting everyone in the mood like a hen night in Magaluf. Beer was flowing, songs were being sung and the sun shone down on the rightuous. As if by some divine intervention, Abba-esque exited stage left and then the rain started and out came the extras from My Big Fat Greek Wedding – how to kill the dreams of 5,000 men…..The music was awful….Zorba’s dance is about as far as the Greek songs go but these guys were intent on murdering any song they could get their hands on. Surely the organisers had seen the crowd of 2-3,000 had now dwindles to 20 or 30, and even the ardent Greeks had gone back to the bars instead of listening to Stavros and his goat.

I took this as my opportunity to leave and headed back to the stadium to watch the remainder of Spain v Russia. The Media centre was packed but still the Carlsberg remained under lock and key – what is the point of having a fridge full of the stuff if we cannot drink it! With enough goodwill sorted out with CMF (present for mother-in-law) and various other interested parties, I got down to a bit of writing before the game.

With Spain cruising to a 3-0 win I popped into the bar to get a Coke and low and behold I bump into two legends. Firstly I meet Franz Beckanbauer who is as nice as pie, asking if I am enjoying the tournament, who do I think will win and do I like Salzburg.   As a parting note he told me to say “hello” to everyone in England.  I started ringing through my address book so please excuse the fact I may not have yet got through to you to pass on Der Kaiser’s greeting yet.  Then I see a bright red face, with balding ginger hair….McClown himself. I ask for word for this very blog but he refuses as he is “watching the Russia match” – yeah right mate – if you would have been doing this last year we may have been prepared for our game in Moscow and not lost – tosser!  What exactly was he doing there?  What possible expert opinion could he offer to anyone.  At least one good thing, as one of my colleagues said, was that he probably wasn’t in the frame for the Blackburn Rovers job, much to his glee.

The press were certainly thin on the ground in Salzburg, and after climbing up the Lego Technics towers that took us to the media area it was obvious that most had headed west for the Spain game earlier in the day.  It does seem a shame though that so many real fans had missed out on the chance of seeing this game because some fat journalist couldnt be arsed to cancel their seat.  The UEFA media team had put in place a system of red and yellow cards for non-attendees – one no-show and you got a yellow card by text and email, another and you got a red card which was an immediate one match ban.

It was good to see the Swede’s had taken over the stadium, and were making all of the noise.  Now I love the Swedes.  They are very passionate about their country, they love a beer and they have some of the best looking fans in the world – which makes for crowd watching a very enjoyable past time, which was just what I spent most of the first half doing as the ultra dull Greeks started playing for the draw as early as the 7th minute.  Try as they might with Larsson, Ljungberg and Ibrahimovic up front, the Greeks stifled the life out of the game, and seemed to be playing for 3 x 0-0 draws in the group.  In fact if it wasnt for the Swedish fans singing their hearts out, and jumping up and down I would have been asleep long before the 30 minute mark.  One incident summed it up.  A string of over 30 consecutive passes is normally a sign of a team in total domination, but when the passes were between the three Greek centre backs in their own half, under no pressure from the Swedes, you will understand how desperate the Greeks were.  “Total Football” Greek Tony texted me – yeah right.

I tossed a coin to decide whether I came out of the press room for the second half or not, and at least the first 15 minutes of the second half justified my decision.  Greece threw on Georgios Samaras the ex-Man City striker to try and at least get the ball into the penalty area but it was the Swedes who struck first, with a goal that immediately started the competiton in earnest for the goal of the tournament.  Zlatan Ibrahimovic picked the ball up near to the left hand touchline, took one touch and blasted the ball into the top corner of George Clooney’s net.  For a player who had been so prolific in Serie A, one of the toughest defensive leagues in the world, it was amazing to hear this was the Swede’s first international goal for over 2 years.

A few minutes later Swedish fullback Christian Wilhelmsson pulled up after a heavy clash with one of the Greek midfielders and was obviously in some pain.  Alexandersson initially signalled to the bench, then went and spoke to them at length whilst the Swede’s had a corner to get them to make a substitution.  The bench simply ignored the request, so Henrik Larsson came over and initially appeared to be appealling that he should be taken off.  So with one player down and out, and another almost refusing to play it came as a suprise when Sweden doubled their lead after a serious f@ck up from George Clooney that allowed Petter Hansson to bundle the ball home.  With the game all but won the Swedish bench made their changes and took off scorer Ibrahimovic to leave the disabled Wilhelmsson and the uninterested Larsson on the pitch as a final fingers up salute to the players.

So 2-0 was a fair reflection in the end.  Sweden had been average, Greece very poor and now with all 16 teams having played a game it was obvious that neither of these two would be upsetting the apple cart later in the tournament.

It was never going to be an easy trip but some 11 hours later when I eventually walked through the front door of Chez Fuller I realised that it was a tad ambitious to plan to avoid a hotel stay, and “sleep on the hop” on a train from Salzburg to Munich, at Burger King in Munich, on the S-Bahn at 3.30am to Munich Airport and finally at the airport.  Hmm…all for the love of the game.

What possesses people to do this?

Fanzone Swedish style in Salzburg – Mozart would have approved of Abberesque

The Scots aren’t sad, after all its acceptable to support another country – right?

As all true football fans know, a cow is an essential accessory

Greece defend their title in the Salzburg sunshine

A birds eye view of the Swedes

Just a few Swedes have made the trip to Austria then

Greece and Swedne line up to bore us in Salzburg