Today’s idea, which follows the same principal as all of our others in being filed in the section “Not rocket science” comes from the ever amusing Putajumperon who combines watching Watford with local grass roots football.

The ritual Sunday morning scouring of the fixtures pages in Non League Paper has become an obsession for me, and a concern for my wife. I’m optimistically looking for two things; the perfect midweek game to go to, and the possibility of a second game at the weekend.

Like so many other football supporters (notice I didn’t say “fans”) I was dragged to football by my forefathers and am now dragging my young son along too. The team that was chosen for me was an average Division 4 Watford side; not a glamorous club, but it was a step up from Isthmian League Wycombe Wanderers games I’d seen thus far. Fast forward 35 years and I’ve started watching non league football again. I’d even say I’ve fallen in love with football again as a result. I won’t give up Watford (I can’t) but now I want to see as much football as possible, and I mean real football not the self-satisfying top league… And this brings me back to the NLP’s fixtures pages and my goal: two games a week, with or without Watford.

With midweek games it’s easy, there’s always something nearby to sate my desires, but Saturday is a serious problem. With Watford at home I can only optimistically hope there’ll be an early, or late, kick-off nearby so I can get two games in (there’s five or six teams right on the doorstep). I know I’m not alone in this quest, and I know I’m not alone in being disappointed. The thing is if all these (non-televised) clubs could work together they could very easily tweak kick off times so supporters could attend two games. 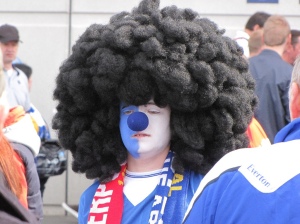 Take Saturday 14th April. At 2.15pm 87,231 supporters left Wembley Stadium after the FA Cup semi-final between Liverpool and Everton. 45 minutes later (when most of those fans were standing in hideously lengthy queues for trains outside Wembley Park) Hendon FC kicked off an important play-off chasing match with just 224 supporters watching.

When you add to the mix that, showing one’s semi-final ticket, admission to the game was only £5 it’s staggering that, as far as I’m aware, I was the only one at both games. Given that Budweiser sponsor both the FA Cup and now Wembley FC where Hendon play you’d have thought some promotion of the latter’s game could have easily drawn at least 100-200 supporters over from Wembley, to watch Hendon, and The Grand National, and use their bar. Of course this is an extreme example but with the need for cash lower down the game, I’d have thought promotion of games to get fans in is essential, after all 100 extra fans at this game would’ve resulted in £750+ extra on the takings. (The crazy thing is, when I left Hendon there were still supporters queuing for trains home from Wembley). END_OF_DOCUMENT_TOKEN_TO_BE_REPLACED

The Swans remain second in the Championship despite dropping points at home to Watford on Tuesday night.

It was a game of two halves at the Liberty with The Swans looking to be in complete control in the first 45, taking the lead through a Stephen Dobbie strike on 26 minutes. Mark Gower’s inch-perfect ball into the penalty area played Dobbie through on goal and after being dropped to the bench for Saturday’s trip to Scunthorpe, the Scot broke the deadlock with his second goal in 3 games. END_OF_DOCUMENT_TOKEN_TO_BE_REPLACED