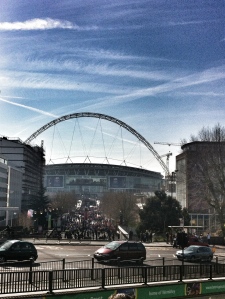 Freight Rover, Sherpa Van, Leyland DAF, Autoglass, Auto Windscreens, LDV Vans and now Johnstone Paints.  Many names for the Football League Trophy, or the Associate Members Cup.  It doesn’t matter what it is called, it is simply the easiest way that teams from the lower reaches of the Football League can enjoy a day out at Wembley.  Previous winners since its inception in 1983 have included five current Premier League clubs, as well as current Blue Square Bet Premier League sides Grimsby Town, Mansfield Town and Luton Town.  The most successful side in the history of the tournament has been Carlisle United who have played in six finals, winning twice, including last season’s trophy.

Despite the fact the Football League having toyed around with the format to try to increase its interest amongst the fans, it is still only the final that gets the crowds through the doors.  For the period between 2000 and 2006 the 48 Football League sides were joined by a host of teams from the Conference, including the likes of Leigh RMI (Now playing in the North West Counties League as Leigh Genesis), Scarborough (on five occasions – who are now known as Scarborough Athletic and playing in the Northern Counties East Premier League) and Dover Athletic now in the Blue Square Bet South.  But crowds for some of the games dropping below the 700 mark it was decided to keep it just to the Football League clubs.

This season’s competition started with some of the bigger names in the competition falling by the wayside early on.  Sheffield Wednesday lost to Bradford City on penalties and holders Carlisle United went out to Accrington Stanley.  In one of the more remarkable games, Leyton Orient lost to neighbours Dagenham & Redbridge 14-13 on penalties in a game that was still going on at near 11pm. END_OF_DOCUMENT_TOKEN_TO_BE_REPLACED

Despite having no experience as a manager, wherever Paolo Di Canio goes this season with his Swindon Town, the media are sure to be there, perhaps waiting for that latin temperament to boil over.  Brian Parish went along to see the Robins play Dagenham earlier this week.

“We may only be in the second week of the season, but the games come thick and fast and tonight marks our fourth game of the season already. After the joy of an away win on the opening day, we’ve suffered a heavy defeat at Bournemouth in the League Cup, before losing in the league for the first time at the weekend to AFC Wimbledon. But we already have a chance to put that right against a team that were relegated alongside us from League 1 last season, Swindon Town.

We are used to seeing a few West Ham shirts at our home games, but tonight, there could be more than usual, despite the fact that they are playing away at Watford. And the reason for this is the presence of one man on the Swindon Town bench; Paolo Di Canio.

When he signed for West Ham in January 1999, he was not exactly English football’s most popular person. Banned for twelve games for pushing referee Paul Alcock (and the resulting comedy fall), there were plenty who wouldn’t touch him with a barge pole. However, Harry Redknapp got him to West Ham and the rest is history. The scorer of one of the finest goals you will ever see (against Wimbledon in March 2000), it could be argued that Di Canio found his home in East London. Indeed, he still talks very fondly of his time at the club, and even treated viewers to a sight of his West Ham tattoo during a recent interview with Mark Clemmitt. Put simply, the man is a West Ham legend.

Which is great if they get to play at the Boleyn Ground any time soon, but this is Victoria Road, and the sight of other team’s jerseys in the home section annoys me. As I have ranted here before, I can cope with it on kids, but it’s when you get adults doing it that it frustrates me. END_OF_DOCUMENT_TOKEN_TO_BE_REPLACED