“Some are born great, some achieve greatness, and some have greatness thrust upon them” so said William Shakespeare. The final line to bring that up to date is “and then there are those who achieve greatness buy spun king loads of cash on a project”

Let me take you back to 1931. The Empire State Building has just been completed in New York City, A banking crisis threatens the European economy and the first screenings of Dracula and Frankenstein scare the living daylights out of film goers in London. But in a closed meeting room at the Football League headquarters in Preston there was a monumental debate raging.

At the time there was no automatic promotion between the Football League and the Non Leagues. In fact the 92 team Football League was basically a closed shop, with no team ever “elected” to join the league at the annual end of season vote. The process used to be that any non league club could throw their hat into the ring to be elected as a new member club but it would require a majority vote from the Football League club chairman. And unsurprisingly they were a close knit group who didn’t like outsiders. In fact it wasn’t until 1951 that Workington became the first club to join the Football League in this way at the expense of New Brighton. Occasionally an incidence would occur when they found themselves a team short and they would send a telegram to a non league club and ask if they wanted to join the party.

You didn’t have to even prove you were a successful club to apply for election. Take the case of The Argonauts in 1928 who applied for entry to the league without ever actually playing a game. The one thing they had going for them apart from having an eccentric chairman was that they had agreed a lease to play at Wembley Stadium. The excellent Twohundredpercent website tells the story of the most bizarre club nearly to play in the league brilliantly. 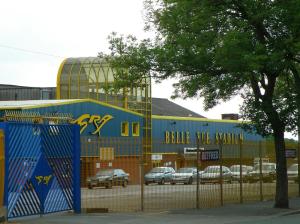 In the same year that the Argonauts were making their audacious bid, a new team was being formed in Manchester. Manchester Central were formed by Man City director John Ayrton (at the time there were no rules about having a stake in more than one club) who saw an opportunity to utilise the Belle Vue Stadium he owned in the east part of the city for more than just a weekly speedway meeting. In their first season they joined the Lancashire Combination League, finishing a disappointing seventh. However, this didn’t stop Ayrton applying to take the club into the Football League at the end of their first season. Unsurprisingly their bid failed. END_OF_DOCUMENT_TOKEN_TO_BE_REPLACED