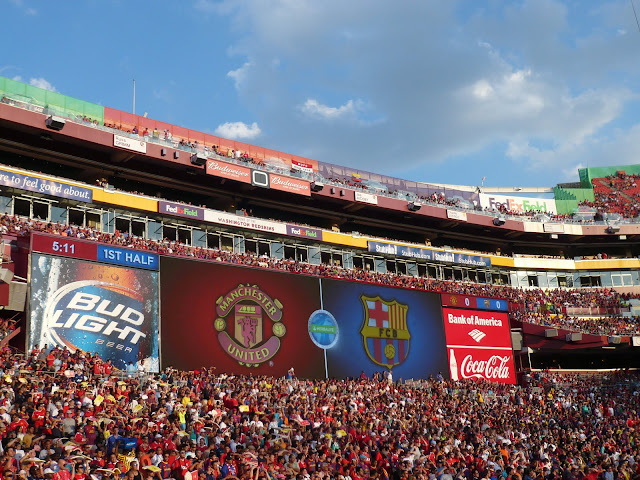 Our Englishman in New York, Luge Pravda, reflects on quite a weekend, and why he loves his wife…of course it’s football related!

This past weekend was one of the most superb, thoughtful, exciting, loving weekends I have ever experienced. It involves football, although early Saturday morning this was the furthest thing from my mind. It involves food, specifically eateries featured in the US TV series Man v. Food (which is on UK TV as explained here). It involves clandestine planning and skullduggery – all good of course – on a level few are capable of (helped no less by my website host, the imperious football planner himself @theballisround). And it involves the other love of my life, Manchester United. So, I am going to write a stream of happy, smiley, giddy consciousness. If I ramble, I make no apologies. I want to document this for myself, as a record of a truly wonderful idea, a wonderful plan and wonderful weekend. If you get bored you can always flick over to Joey Barton’s twitter. But finally, to whom do I owe all this? I owe this to my amazing sneaky Utd appreciating wife. END_OF_DOCUMENT_TOKEN_TO_BE_REPLACED

Plans change at the drop of a hat in TBIR towers, so when the trusty TBIR taxi failed a late fitness test, our venue for watching the game tonight switched from The Emirates with the Guardian Football Weekly team to the front room.  But I still needed some amusement so CMF came up with the ultimate challenge.

0 Mins – COMING UP soon will be full 90 minute commentary with the aim to get in a song a minute.  A tough one we know.  But LET’s GET SERIOUS for a minute.  Do we think Man Utd can win?  Hell yes.  We’ve already rated Valencia and I think he could be the key here.  Man Utd’s lack of height up front could be an issue but then again with Rooney there is always the chance of some MAGIC.

So many songs could be used to describe Giggs’s feelings tonight. I bet he now thinks “SHE IS OUT OF MY LIFE”.  Not if Max Clifford is involved – more like he will be trying to get her as much FAME as possible. END_OF_DOCUMENT_TOKEN_TO_BE_REPLACED

My father was a devout egg-chaser. Competing in the local Rugby Union leagues on a Saturday afternoon meant that my football fix as a youngster came from Grandstand and – if I was allowed to stay up late enough – Match of the Day.

My only footballing influences as a youngster came from my Uncle and Cousin who, unfortunately were Manchester United fans. For a while, this was to lead me down a path of red shirts and Ryan Giggs posters torn from Match magazine. But I never really felt comfortable as a Red Devil.

Fortunately, it wasn’t long before I realised that I was Luke Skywalker being pulled to the Dark Side by my Uncle Vader and Cousin Moff Tarkin (although there was less killing and planet destroying). My home-town team Leicester City had been playing well in Division One, and with the whole city on a football-high, they capped it off with a Play-Off Final victory over local rivals Derby County. The Empire had started to fall.

It was only fitting that, during the Foxes’ first foray into the Premiership, my Aunt received free tickets from her company to Leicester City’s game against Alex Ferguson’s reigning Premiership champions.

Upon receiving the tickets, I remember being disappointed that our tickets were for the “Double Decker” Kop rather than the season-old Carling Stand. I was even more disappointed when – after walking along Burnmoor Street, passing the electricity sub-station, and trekking up the stairs to the second tier – I found out that the “Obstructed View” printed onto my ticket actually meant that the East Stand covered the entire right side of the pitch.

Goals from Lee Sharpe, Paul Ince and an Andy Cole brace ensured that Manchester United ran out 4-0 winners, but the game couldn’t have been fantastic as I don’t remember a single one of the goals.

However I do retain a memory of the crowd holding it’s breath as the ball fell to Mark Draper at the edge of the United box. And with a shot that made the Rebels glad that they didn’t put him in charge of the laser for destroying the Death Star, Draper somehow scooped the ball right over the top of the North Stand.

I can still imagine that ball rolling down Filbert Street…

Christmas Time, Mistletoe and wine, Children singing “its relegation this time”….Things at Upton Park are not rosy this season.  The team haven’t exactly fulfilled their promise this season and have developed a nasty habit of throwing away leads.  Last week against Burnley with 15 minutes to go the Hammers were 5-0 up.  It is fair to say that if the referee had Alex Ferguson’s watch on they would have gone on to score two more to get a draw.

The first week of December bought more cheer for West Ham.  First up was the news that Carlton Cole, our one goalscorer and player that the opposition feared was to have a knee operation.  Then came the news that influential midfielder Valeron Behrami was also having an operation.  Matthew Upson then reported sick further hampering our preparations for the visit of Manchester United.  The club then announced it would be “delaying” the release of its financial accounts until the New Year.  Now everyone in business knows this is not a good sign.  You don’t decide to keep the markets in suspense if you have good news.  Rather you want to look for a worse event to bury bad news.

But we did have some cheer.  The West Ham doors were back in stock for Christmas!  Yes, those essential items that every home should have were back in the club shop to purchase at just £99 each.  Yep, so for under a hundred pounds you too could have the face of Gianfranco Zola, Robert Green or Julian Faubert adorning your room (see our post from last season for a full list of other tackiness.  And the game against Man Utd marked the year anniversary since……since SBOBet became West Ham’s sponsor.  In such turbulent times it was good to see the club hold onto such traditions.  And to celebrate the event EVERY home fan was given a FREE scarf(sorry Man Utd fans but you were not trusted not to just sell them on Ebay!).  It’s what every home fan wanted – a scarf with our sponsors name plastered all over it along with the date of the game which we would come to want to forget in 24 hours time.

West Ham United 0 Manchester United 4 – Upton Park – Saturday 5th December 2009
Still what better time to play Man Utd.  Whilst we had Zavon Hines up front instead of Cole they had Vidic and Ferdinand missing at the back. Oh how we laughed midway through the first half when Gary Neville pulled up lame and then refused to go off until ordered by the referee and stormed down the tunnel.  Michael Carrick got a great reception from the home fan and slotted in at centre-back alongside Wes Brown – now they were their for the taking! Except they weren’t.  In the first 45 minutes of the game we had 33% of the ball, did not have one shot on goal nor a corner.  I could tell you what Man Utd had but then it would give the impression the game was one sided!  Forty Six minutes on the clock, another Man Utd corner and this time Paul Scholes’s effort from outside the box flew into the top corner. 1-0 at half time.

The rain started falling heavily again, just to make the northerners feel more at home.  Half time brought some awards for the Bobby Moore Cancer Fund – £40,000 from the club for the game versus Napoli in August (has it really taken four months to count the gate money) and £5,000 from SBOBet for a share in the ludicrous amounts of cash they take off punters on a daily basis.  Both were these ridiculous oversized cheques – you can’t pay them into a bank (so says Northern Steve) and it costs about £200 to get them made up.  Is it just me or in the modern era they should have a huge card machine where they have to press buttons to put in their PIN?  Who pays by cheque anyway these days…

But back to the action.  Hines of course, being our most effective player picked up an injury so Alessandro Diamanti came on.  Paolo Di Canio, the club’s special guest sitting in the Directors Box with Russell Brand, Martin Peters and it was also rumoured 50Cent (he is a chum of Rio Ferdinand who apparently used to play football) would have approved of the Italian’s style – under hit corners, free kicks that go into the upper tier, and a permanent bandage around his wrist.  He had our first chance – firing a free kick so high into the Bobby Moore UPPER tier that it was returned with snow on it.  Man Utd were on the ropes.  West Ham got the ball into the penalty area on three occasions and once their goal keeper Kuszczak had to step off his line!

An hour gone and Man Utd break down the West Ham right.  Giggs to Rooney to Gibson and the youngster followed up on his brace from distance in midweek against Spurs with another from 25 yards.  2-0.  Robert Green sat with his head in his hands and needed some attention.  It appeared he had a migraine and had to take a pain killer.  In his new substitution policy agreed with Zola at half time, any player who looked threatening was withdrawn and so just 30 seconds later off came Gibson.

West Ham played their trump card.  Their Ace in the Hole…step forward Kieron Dyer – remember him?  Well I think us West Ham fans had seen him touch the ball a dozen times in the two and a half years he’s been at the club.  Great return on investment there.  His first touch was to Anderson, who fed Rooney, Rooney crossed and Valencia tapped in.  Brilliant points for my fantasy league team at work at last (lets ignore the fact I also have Illunga in my defence).  I was busy tweeting the latest nail in our coffin when Parker lost the ball from kick off, Rooney fed Valencia and this time his cross was tapped in by young Wayne from 6 yards.  4-0.  Ferguson was incensed that he hadn’t had a chance to substitute Valencia after scoring the third and blamed Rooney so he took him off instead.  So now they had Berbatov and Owen up front – so much for their reserve team.  Green could cope no more and in a rare instance for West Ham we actually saw our reserve keeper.  May fans still thought we had Jimmy Walker or Shaka Hislop as our backup  as it had been so long since Green had missed any action but on came Kurucz, looking like a 6th former who had been out partying all night.

Wes Brown snuffed out any potential threat from West Ham’s attacks and Ferguson was having none of that, so off he came and Man Utd played out the last ten minutes with ten men and had a back four of Giggs, Scholes, Carrick and Evra.  Did we threaten them?  Absolutely not.  It was a shame Ferguson didn’t go the whole hog and take off the keeper and put Owen in goal.

So four nil was flattering to us.  Results around us meant that we hadn’t yet slipped into the bottom three but with Birmingham away and then Chelsea at home before Christmas we are not expecting much Christmas cheer.  I jealously heard about the Ultra action down at Maidenhead from Mr Last and thought about how far away the game has got from its non-league roots.  West Ham Doors I ask you!