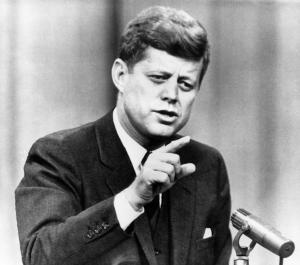 The immortal words of JFK, who was killed 50 years ago next week sum up the feelings around the Dripping Pan this week.  Today marks a welcome return to Saturday football for Lewes FC.  It’s been three weeks since we saw such action thanks to our elimination of both national cup competitions and a postponement all too quickly last weekend at Grays Athletic.  We’ve had some midweek action in that period, with one of the worst refereeing performances ever recorded on Tuesday night away to Bury Town seeing us fall to a 97th minute goal. But the mark of a great team is how they bounce back.  As the 35th President of the United States of America, John F. Kennedy was immortalised not for his good work as the most powerful man in the world, but rather by his public and contraversial death.  However, whilst he was in office, he was the king of the one liners that are still used today to motivational effect.

“Efforts and courage are not enough without purpose and direction”

Since we were last here, beating Margate back in October, everyone at the top of the table have been busy having their apple cart’s upset, including the visitors at The Pan today, Lowestoft Town, who bizarrely lost 2-0 at home to Cray Wanderers last Saturday.  Lewes’s next visitors at The Pan on Wednesday had just two wins prior to their visit to Suffolk last week and had conceded on average over 3 1/2 goals a game.  AFC Hornchurch’s home defeat to Harrow and Maidstone’s home point against Leiston are further proof that no-one wants to win this league.

END_OF_DOCUMENT_TOKEN_TO_BE_REPLACED

After last week’s defeat to Hendon in the FA Cup we had to watch through our fingers as the draw for the next round inevitably paired the Dragons with Eastbourne Borough.  The biggest game the Rooks could get – hammering home the disappointment even further of the exit in the shadow of Wembley Stadium and the loss of prize money. 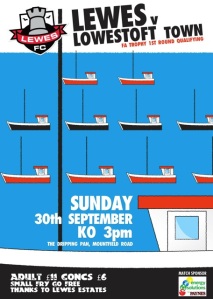 But a week is a long time in football and at this stage the cup competitions come thick and fast.  As one door to Wembley slapped shut, another bursts open.  Who needs the FA Cup when you can have the Trophy instead.  Sure, the cup is a bit smaller but it still has a lid you can put on your head when you dance around the pitch at Wembley Stadium.

Lewes’s record in the competition hasn’t been great.  They’ve never been passed the 3rd round, and the last occasion they got that far it all ended in a bit of a bizarre game.

The date will forever be fixed in the memories of those who braved the cold to be at the Pan on Saturday 14th January 2004.  FA Trophy fever had reached Lewes, with the club progressing to the 3rd Round of the competition for the first time in ages.  Their reward for a 4-3 win away at Cinderford Town in round two was a home tie with Weymouth, managed at the time by Steve Claridge.  Nothing out of the ordinary about that you may think, but 90 minutes later most of the thousand plus crowd had to have their jaws physically closed and their eyes popped back into their sockets after a thirteen goal thriller. END_OF_DOCUMENT_TOKEN_TO_BE_REPLACED

According to history, the Ides of March (15th March) is considered to be an unlucky date. Many people think that Friday the 13th is the unlucky date but that came into play after the culling of the Templar Knights in the middle ages on the orders of the Vatican (apologies for the brief religious interlude).

The Ides of March were a hallowed day in Roman history as it was the prime day of celebration for the worship of the god Mars. Just like today Mars was revered but not quite in the same way. Our worshipping of a chocolate bar is a bit different to their deference of the god of war but not far off if you have seen the scrum in Netto when they do a buy one get one free. It was also the day, back in 44 BC when Roman Emperor Julius Caesar was murdered by his back benchers for fiddling his expenses. As he uttered the words “Et Tu Brute” he created the immortal line about literally being stabbed in the back, made even more famous by Kenneth Williams in Carry on Cleo. 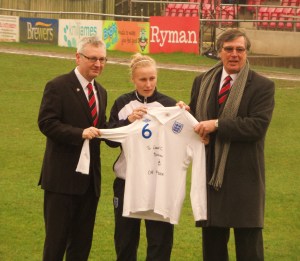 The Ides of March had raised their heads at Lewes this season already. Two excellent wins had put the Rooks back on track for a push for the playoffs, sandwiched by the news that the awe-inspiring, record-breaking Lewes Ladies had won the Womens South East Counties League without even playing. Their record so far thus season of just dropping 2 points is amazing and the club can now boast an England International with Naomi Cole. The chance of the double came on the Ides of March – the Sussex Cup final versus Brighton & Hove Albion. Looking to defend their trophy, the Rookettes battled hard but fell agonizingly short. The Ides of March – stabbed in the back by those so close (I.e Brighton).

There was still the matter of the League Cup to come as well as looking forward to next season when they would be taking their place in the Premier League against teams who could call on significantly more resources than the Rookettes. Oh, and there was the small matter of Naomi Cole’s recent England debut. Superstition? Who needs it? END_OF_DOCUMENT_TOKEN_TO_BE_REPLACED 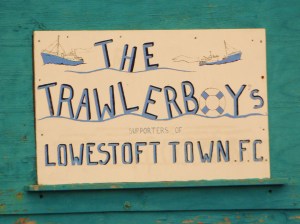 Finally the wait was over. 9am, Saturday morning, Liverpool Street station and we were boarding an old style InterCity 125, especially laid on for the Lewes Lunatic Fringe to take us north east to the Suffolk seaside. Welcome to the 2011/12 football season.

Now some of you may think we are a couple of weeks too late with this post, but remember we now live in the Isthmian world and thus any reasonable logic has to be suspended. Kicking off their leagues two weeks after most divisions is hardly a sensible idea when we will almost certainly have “the worst winter ever” and most clubs will then end up playing 8 games a week to catch up. But we long gave up trying to understand how exactly they are helping clubs.

When the fixtures eventually came out (some weeks after the rest of the divisions), we all groaned at seeing our first opponents. No disrespect to Lowestoft Town, but a three and a half hour train journey (add an hour and a half for those from Brighton) was not on the agenda for day one. The bookies had made Lewes favourites for the title, and The Trawler Boys second favourites, so this was sure to be Sky Sports game of the day? No? Oh well it seems like I am going to have to tell you all about it then. END_OF_DOCUMENT_TOKEN_TO_BE_REPLACED 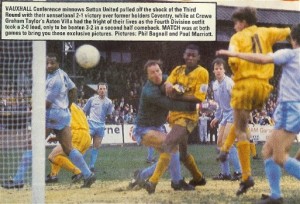 On Saturday 7th January 1989 the world of Sutton United changed forever. On that historic day at 5pm over 8,000 fans celebrated the fact that they had just beaten Coventry City, playing in the top level of English football in the FA Cup. The same Coventry City who just 600 days before had held aloft the FA Cup at Wembley Stadium.

Whilst everyone remembers Sutton from this game, they also had their day in the FA Cup sun back in 1970 when the club made it through to the Fourth round, having beaten Dagenham (before they found Redbridge down the back of the sofa), Barnet and Hillingdon Borough in the previous rounds.  They were then drawn against the mighty Leeds United, League champions and on their way to the FA Cup final.  Under Don Revie there was no way that they would come unstuck against a Non League team (12 months later they lost THAT game to Colchester United though), and a 6-0 victory in front of 14,000, still a record attendance for the club. END_OF_DOCUMENT_TOKEN_TO_BE_REPLACED