Ronaldo was at Wembley on Sunday. No, not that preening Portuguese. But a ton of beef and a champion in his own right, and to give him his full name, Hawkesbury Ronaldo. The Hereford bull was paraded around the pitch at Wembley before the match between Hereford FC and Morpeth Town in the FA Vase final.

If you thought Leicester City’s winning the Premier League was the stuff of football dreams, a similar story was unfolding at the club in the town where I grew up and started watching football seriously.

Only seven years ago Hereford United even played in the same division as Leicester City. Go back even further and they were part of F.A. cup legend, when Ronnie Radford’s 30-yard rocket toppled first division Newcastle United in an Edgar Street replay and West Ham were grateful to escape from Hereford with a 0-0 draw.

But Hereford have had a history of financial difficulties in recent decades as they bounced from Conference into the Football League and then back down again. Matters came to a head when the club were taken over by a group of London businessmen who many thought had designs on the Edgar Street site as real estate rather than a viable football club. In June 2014 United were expelled from the Conference over unpaid debts , and in December 2014 were wound up at the High Court in London when director Andrew Lonsdale failed to produce a required £1million proof of funding – claiming he was stuck in traffic!

But the club has risen from the ashes of financial oblivion with a new name – Hereford FC- and a new identity. After all the turmoil a fresh start beckoned in the summer of 2015. The supporters club set about starting a new club and, with the backing of four local benefactors, they registered to play in the Midlands League, the ninth tier of the English game.

Their first season as phoenix club has been a remarkable tale of redemption and success. A squad had to be put together from scratch, but they won their league with 108 points and with the Herefordshire County Cup and Midland Football League Cup already in the display cabinet, the quadruple was on at Wembley.

Hereford were due to bring not only a one-ton bull but 20,000 supporters to the national stadium. From a low of around 100 spectators under the previous, despised owners, home attendances have risen to an average of nearly 3,000 this season. The attendance at the Vase semi-final against Salisbury in March was 4,683 – an increase of 300 on when Leicester were the 3-1 victors in League One back in 2009.

Which must beg the question, where have all those 20,000 fans come from. Many,no doubt, like me (who went en famille) part of the Hereford Diaspora.

The Southern League awaits next term, so they will be competing, not for the FA Vase, but the FA trophy, the final of which was played at the same venue later in the day.

Hereford FC (1) v Morpeth Town (4) – Wembley Stadium – Sunday 22nd May 2016
The match could not have started better for Hereford. Rob Purdie opened the scoring with a fine 25-yard strike after 78 seconds for the Midland League champions. It looked good for the team who went into the final on the back of a 22-match winning run. They could even have been three or four goals to the good, such was their dominance for the first half hour, but found Karl Dryden in the Morpeth goal a formidable barrier.

Enter Morpeth defender Chris Swailes to write another chapter in football’s fairytale season. At the age of 45, and two years after heart surgery, the defender became the oldest man to score at the new Wembley. Hereford’s goalkeeper misjudged a corner, and allowed the former Ipswich Town player to bundle the ball home in the 34th minute for an equaliser. Hereford heads fell, and when Luke Carr put Morpeth in front after only 42 seconds of the second period, from Sean Taylor’s cross, it was clearly game over.

The Midlanders ran out of steam and ideas. Taylor added a third in the 59th minute before substitute Shaun Bell scored a fourth in stoppage time to rub salt into the wound. Northern League Morpeth Town deservedly lifted the FA Vase for the first time in their history.

Perhaps Hereford should have tried to get their Ronaldo on to the pitch.

There have been so many appalling scandals involving football teams in the last 20 years that it is difficult to pick out one for special mention, but the shocking going-ons at Hereford United take some beating.

A proud club, Hereford will always be remembered for that Ronnie Radford thunderbolt in the FA Cup victory against mighty Newcastle United in 1972.  But as recently as 2009 the Bulls were in League One, upsetting the football betting odds left, right, and centre by playing and beating the likes of Leeds United, renowned for their attacking football and financial security.

Fast-forward five years and Hereford United is a club in turmoil, its heart broken by greedy businessman, and the fans boycotting the team’s matches.  Relegated from League Two in 2011-12, just six years after clinching promotion from the Conference, the Bulls finished sixth in their first season back at level five under the stewardship of Martin Foyle before the problems really started.

Former chairman David Keyte somehow managed to increase the club’s debts to £1.5million despite a deterioration in the quality on the pitch and annoyed Foyle so much that the former Port Vale striker launched a winding-up petition against the club in May.

Lurch from one crisis to another

More winding-up orders came and went and the reviled Keyte eventually sold the club to Tommy Agombar, who became one of the few men to fail the FA’s owners and directors test. He then sold up to a company specialising in distressed debts, Alpha Choice Finance.

Despite handing the club several new deadlines to sort out their debts, the Conference finally lost patience with Hereford and threw them out of their league, ironically just weeks after a last-gasp Michael Rankine goal had staved off relegation on the pitch.

Hereford were accepted into the Southern Premier League despite still lurching from one crisis to another, a league two levels further down the football pyramid than the Conference.  A rag-tag of players continue to wear the Hereford shirt but less than 250 people paid to watch the team lose 2-1 to Corby Town in October, just ten per cent of the numbers that regularly turned up at Edgar Street less than five years ago.

In an attempt to draw more attention to their plight, more than 200 United fans took their protest against the club’s current regime to Kidderminster for their game against Welling United at Aggborough.

Banners explaining Hereford’s situation were on view at a match which was televised by BT Sport, and applause broke out around the ground in the 24th minute to mark the club’s foundation in 1924. But the future looks bleak. Agombar’s holding companies have sought to take control of the club’s leases on Edgar Street, although the council, who own the land, opposed the moves and the requests were withdrawn. The whole situation remains a mess and, as usual, it is the fans who suffer.

Hope springs eternal is a familiar mantra of many football fans, but none more so this season than Brian Parish, our very own Daggers Diary author.  After a great draw with Millwall last week in the cup, it was really the case of the Lord Mayor’s show leaving town as Hereford United game to East London.

If you buy a programme when you go to a game, then there will often be an article on one previous encounter between the two teams. Usually this takes the form of a crucial league win for the home side, or a memorable cup game.

The Daggers today entertain Hereford United. Mention Friday 27th February 2004 to anyone who has been following the club for less than eight years, and you will probably get a very blank look back. Mention it though to anyone who has been supporting the club longer than that, and the chances are that they will start to break out in a cold sweat, and shudder at the memory of a night that produced (for the Daggers at least) the game from hell. 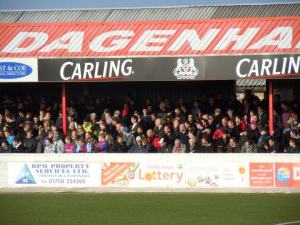 In 2003, we had lost the Conference play off final to Doncaster Rovers, and during the summer that followed, most of the side that had reached the final at the Britannia Stadium left the club. There were big changes for the club at the time, not least the move to a full time playing squad. With many of that side unable to give well paying jobs, they were allowed to leave and almost a whole new team came in. Unsurprisingly, the new players took some time to adjust, but it soon became clear that we were not going to be reaching the heights of the previous few seasons, and that was most definitely a transition stage. END_OF_DOCUMENT_TOKEN_TO_BE_REPLACED

Here’s the thing: I’m not really sure. Whilst my father – through his love of Manchester City – had a huge influence upon my childhood attendance at football games, it was an uncle who took me to my first ever match. Of that I’m pretty convinced. I’m equally certain the venue was Edgar Street, the home of Hereford United. The opposition? Scunthorpe United, possibly. The score? I’ve since imagined it to be 0-0 but in truth I’ve no idea. The game? I don’t remember any of it and I couldn’t tell you if it was a league game, a cup tie or a friendly. No programme adorns my collection, regrettably. END_OF_DOCUMENT_TOKEN_TO_BE_REPLACED

It’s not all beaches, ice cream and lava bread down here in Wales you know.  Part of my work for the week is to look at the state of Welsh football, quoted a month ago by Neville Southall as “in the last chance saloon” and obviously take in a game or two in the process.  There are some real good news stories in the valleys of South Wales at the moment.  Dean Holdsworth has led Newport County into the Blue Square Premier after walking the Blue Square South league last season and Cardiff City have been to Wembley three times in the past two seasons just missing out on a spot in the Premier League to accompany their new stadium a few months ago.

So what is Southall talking about?  He was referring to the dire situation in the Welsh Premier League.  On Friday 13th August the new slimmed down Welsh Premier League will kick off with The New Saints (aka TNS) taking on Prestatyn Town in what is seen as the last throw of the dice to make the league work.  The Welsh Premier League have been ruthless this time, reducing the league by 6 teams and applying a strict entry criteria for the twelve that remain.  The league does not have any major sponsor, vast pots of TV money or overseas commercial rights.  It is a league where part time clubs face some long slow journeys to away games to play matches in front of a couple of hundred people, whilst in the pub next door more people will be watching Sky Sports. END_OF_DOCUMENT_TOKEN_TO_BE_REPLACED