Despite the fact we drowned our sorrows on a season to mostly forget last Saturday, there was still a fair amount of business to be decided in other leagues up and down the country.  Not only was there the small matter of deciding who would be moving up from the Ryman North and South but the National Leagues were also heading into their final games.  A sensible decision by the Conference meant that the final games in the Premier league would kick off at 5.30pm, meaning that if you picked the right games, you could see an earlier and a later game.

Never one to need an invitation to get involved in something like that I packed up the car and drove 252 miles north through rain, hail, sleet and snow to Harrogate to watch their final game of the season against Corby Town.  I could have lied to the Current Mrs Fuller and said this was a scouting trip; to some extent it was – a visit to a new ground means looking at their facilities, having a chat with officials and trying to get under the bonnet of the workings of their club – but this was purely down to having a rare opportunity to spread my wings and go for a wander, being a Football Tourist for the day.

Harrogate Town 5 Corby Town 0 – Wetherby Road – Saturday 30th April 2016
Harrogate Town had already sealed their Conference North Play-off spot and were hosting already relegated Corby Town.  The winter weather had passed over the Pennines and the sun was shining as crowds built up down Wetherby Road to get in.  An old chap behind me in the queue moaned that if this was what it would be like if they did go up to the Conference Premier, he wouldn’t be coming again.  He also said if they lost in the Play-offs he wouldn’t be coming again – you can’t please everyone!

Harrogate have a decent ground with three of the four sides with good-sized structures.  There was also a hospitality area with a decked “porch” with nice tables and chairs set out.  There was a real family atmosphere feel around the ground, with kids having space to play their own games of football adjacent to the pitch.  Their 1919 hospitality area was doing a roaring trade before the game as well as the food van which was serving the staple in these parts, pie, peas and mint sauce plus a huge home-made sausage roll that would have made Katie Price blush. 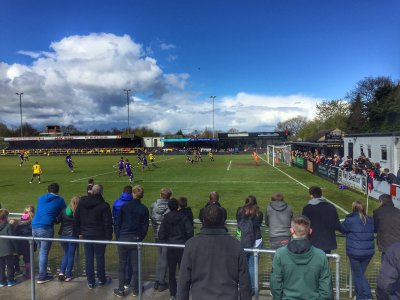 The difference between the two sides was evident within the first few minutes as Harrogate raced to a 3-0 before I’d finished said sausage roll.  Chatting to one of their officials it seems that to compete in this league you need a budget in the region of £5,000 per week, although Champions Solihull Moors have managed to win the league on a smaller budget.  Travel is a major issue for clubs with teams like Lowestoft Town, Gloucester City and Worcester City having to play against Barrow and Harrogate.  Whilst there isn’t one team who appears to have tried to buy their way to the league, next season the league will feature Darlington and Salford City, both of whom have significant resources behind them.

The club have a decent, vocal support though, who kept encouraging the team throughout the game.  In truth they could have scored double figures – whether that was simply the fact that the visitors had already given up for the season or that everything clicked over the 90 minutes.  One of the biggest cheers of the day was on the news that Leeds United had lost to doomed Charlton Athletic at Elland Road.  Whilst only being 20 miles down the road, the club didn’t seem to suffer in terms of attendances – in fact with the club still facing so much off-the-field turmoil, it has actually benefited Harrogate with a number of fans shunning the professional game for the beauty of the Non-League variety.

Could they cope with life at a higher level?  They certainly have the facilities in place and hopefully more locals, like today, would come and give the club a try.  After all, clubs of a similar size such as Boreham Wood, Welling United, Braintree Town and Guiseley had managed it for more than a season.  Good luck to Harrogate.

Guiseley AFC 4 Torquay United 3 – Nethermoor Park – Saturday 30th April 2016
My choice for the later game turned out to be inspired.  Just twenty minutes away on the other side of the runway of Leeds-Bradford Airport, is the small town of Guiseley, famed for being the birthplace of Harry Ramsden and Harry Corbett (he of Sooty and not of Steptoe fame).  They would be hosting Torquay United in a must-win final game of the season.  Even if they could gain a victory, results across the moors at Halifax could still see them relegated. 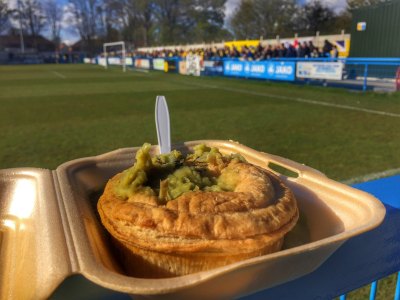 It is fair to say that nearly 2,000 squeezed into the tiny Nethermoor Park ground on the edge of the town, making enough noise to be heard in Lancashire.  They raced into a 3-0 lead in the first half, with Torquay, already safe, mentally on the beach, but then just before half-time Halifax scored.  With Boreham Wood also winning, Guiseley occupied the final relegation spot.  The Torquay fans took to reminding the home fans of the fact that they would be relegated even if they won which pleased the locals no end.

Torquay finally realised they were here to play football in the second half and pulled two goals back, with veteran centre-half Exodus Geohaghon’s long throw-ins causing no end of issues for Guiseley.  The nerves of the home fans were eased when Macclesfield equalised at Halifax but with Torquay always looking dangerous, Guiseley simply had to try to score.  They did but back came Torquay to make it 4-3.  Every time a Guiseley player went to take a throw he’d ask someone in the crowd what the score was at Halifax..”1-1” came the reply. The final whistle blew and the fans invaded the pitch, but there was no cheering just yet.  It was a good two minutes before the cheer hit the stands.  Halifax had drawn, Guiseley had escaped.

Even as a neutral it was hard not to be caught up in the celebrations.  Having been in this position myself I know the relief it brings, as well as those promises of “never again”.  The fans, the players and the whole club can celebrate for a day or two before the planning has to start on making sure the same thing doesn’t happen again next year.

I’m sure the footballing authorities would much rather have more “traditional” clubs in the Conference Premier such as Kidderminster Harriers, with their nice Football League ground, but it is clubs like Guiseley and Braintree Town who demonstrate you can upset the odds on modest budgets and give every club in the leagues below that you can have the dream.