And so 7 years and 3 weeks since we were awarded the games, the London Olympics is upon us. How could anyone in Great Britain not be excited by the next 18 days featuring the world’s greatest athletes? And here we were, ready to experience the opening events. Whisper it quietly, but the London Olympics didn’t start with the multi-million pound opening ceremony in the Olympic Stadium, but actually started on Wednesday in Cardiff when Team GB ladies took on New Zealand. Even the official Olympic website suggests the games start on the 27th July – as if someone is embarrassed by the fact that football even exists in the games.

It has hardly been a surprise that virtually every game outside of London or not featuring Team GB has struggled to sell tickets. I have argued on these very pages about the logic in using such big stadiums in the far flung areas of the United Kingdom. Those romantic few told me that the residents of Glasgow and Cardiff would flock to watch the likes of Honduras, Morocco, Belarus and Gabon because it was “the Olympics”. Last week, LOGOC took the decision to remove over 500,000 unsold tickets for the football tournament from sale and simply close down parts of the stadiums, obviously making sure that the TV facing seats were full. 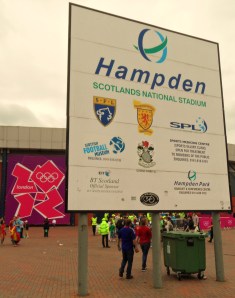 It is too late to argue the merits of using smaller grounds closer to London for the football (Reading, Southampton, Brighton for instance), but it still leaves a bad taste in the mouth that such a logical outcome was ignored. However, that hadn’t stopped me heading north of the border to notch up event one of ten I would be attending during the games. Hampden Park would be our destination for a double bill of Morocco v Honduras, and then a little throw-away tie between Spain and Japan. I mean, who would want to watch Spain these day? What have they ever won eh? Dull, negative football. Give me Allardyce route one anyday! Who wants to see the ball on the pitch. There is a million times more room to hoof it in the air….I’ll stop now.

Despite my frequent trips north of the border, Hampden Park has never featured on the TBIR radar for a game (great tour and even better museum) so when it was announced that games would be held in the Scottish National Stadium it was too good an opportunity to miss, especially as tickets to any events in the proper Olympic venues were impossible to get last year. One thing you could not complaint about was value for money – £61 for four tickets for a double-header of international football. Of course a year on and tickets can be acquired for just about any game – the football was to be the first of TEN events that we would see in a 12 day period during the games (and we will bring you action from all 10 right here). But confusingly, wherever you went, all the signs/websites/newspaper articles said the Olympic games was due to start on Friday 27th July with the opening ceremony. The website told us Big Ben was to chime 40 times on the first day (i.e Friday 27th); the countdown clock was to the 27th July and all of the official records say the games run from Friday 27th July to Sunday 12th August. END_OF_DOCUMENT_TOKEN_TO_BE_REPLACED

“Ladies and Gentlemen.  Let me introduce to you our special guests who will be making the draw today….Ex-Welsh international and the most annoying man on the TV/Radio – Robbie Savage.  Next, another Premier League “battler”,  I give you Kevin Gallagher.  And finally, a very special guest.  World Cup winner, twice FIFA Golden Boot Winner.  A man who has played for the best teams in Spain and Italy.  Fat Ronaldo.” 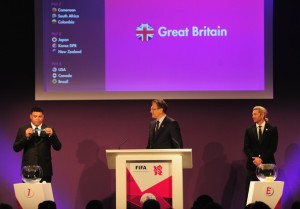 Not only is the whole idea of playing the Olympic football in cities with nothing to do with the games, let alone different countries quite bizarre, but was that the strangest line up you have ever seen at one of these events.  Quite what Ronaldo thought of it all I do not know.  Did he, for just one spilt second think Savage was a girl and was going to invite him to one of his “parties”?  And Gallagher?  Was he simply called up at the last-minute because someone glamorous dropped out?

But for all the *cough* razzmataz, the draw brought home the reality that we will be seeming lots of games during the competition in half empty (at best) stadiums.  I may ultimately be wrong, but with hundreds of thousands of tickets still unsold for the event I think the brain wave of taking the Olympics to other parts of the British Isle will end in embarrassment for the LOGOC. END_OF_DOCUMENT_TOKEN_TO_BE_REPLACED

I never like to miss an opportunity to see a new ground so when worked posted me off to Aberdeen for a few days on business I carefully studied a map to see where I could sneak a ground or two in my travelling time.

So for your enjoyment please find my tour photos below.

The town end in Montrose

Arbroath’s Gayfield Park with the North Sea behind the goal

Home of Scottish dreams and nightmares

Montrose
The club’s halcyon period was the mid 1970s when, under manager Alec Stuart, Montrose reached third place in the old First Division (one below the Premier League), and were a feared and respected cup side. In the second round of 1974-75 Scottish Cup, Montrose recorded their largest victory when they beat Vale of Leithen 12-0. The club won their first and only championship under the guidance of Iain Stewart in 1984-85, as they triumphed in the old second division. Relegation followed in 1987 as the part time club found themselves outgunned in a league largely consisting of full time teams. Under co-managers Doug Rougvie the former no-nonsense Chelsea full back Montrose won promotion to Division One in 1991, but were relegated after one further season in the higher league.

The club have remained at this level ever since, and have achieved little success in the league. Their most notable recent success was a surprising 5-1 win away at Second Division side Forfar Athletic in the First Round of the 2004-05 Scottish Cup.

Links Park is one of the few grounds in Scotland that can boast a new generation artificial playing surface. They are also one of the nicest clubs in the league to deal with. The stadium is a 10 minute walk from Montrose stadium which is located next to the inner bay. Simply walk up the hill into the High Street and take a right hand turn into John Street which becomes Union Street. The stadium is visible as you enter Links Park.

Arbroath
They were founded in 1878 and currently play their home matches at Gayfield, Arbroath, Angus. They play in maroon strips, and are nicknamed “The Red Lichties” due to the red light that used to guide fishing boats back from the North Sea to the burgh’s harbour. Arbroath share an old and fierce rivalry with local neighbours Montrose

Their most notable achievement is that they hold the record for the biggest victory in World senior football, when on 12 September 1885 they beat Bon Accord 36-0 in a Scottish Cup match with a further goal disallowed for offside. Jocky Petrie scored 13 goals in that game, also a record as the most goals by a single player in a British senior match. By coincidence, on the same day in another Scottish Cup match, Dundee Harp beat Aberdeen Rovers 35-0.

The team has had mixed success in recent years. In the 1996-97 season they hit the bottom of the Scottish senior football standard as they finished bottom of the Third Division. However, the following season they were promoted to the Second Division against all expectations. They spent three years at this level before winning promotion to the First Division – arguably the club’s greatest achievement in recent history. They finished 7th in their first season in the First Division, 13 points clear of relegation troubles, which was rather impressive for their first ever venture at this level. However, in the 2002-03 season, the team struggled badly, and finished bottom of the table, 20 points adrift of penultimate side Alloa Athletic. In the 2003-04 season, Arbroath narrowly avoided back-to-back relegations, as they escaped the drop on the last day of the season. In 2004-05, however, there was no such escaping, as a 3-0 defeat at Dumbarton on 30 April 2005 condemned them to the Third Division for next season.Arbroath finished 4th in Division 3 but went on to win the end of season play off and thus were promoted again to Division 2.

Arbroath’s ground Gayfield Park is the closest to the sea in Britain, a neat and picturesque old-style ground exposed to the elements, with terracing on three sides and enclosed stands on all four sides. On stormy winter days, waves can be seen beating on the walls surrounding the ground. Clearances in the teeth of the gale, let alone polished football, become impossible. Goalkeepers can find it hard to spot the ball to kick out and even then goalkicks occasionally fly out for corners. Throw in the ubiquitous seagulls and, in clement weather, the rides on Pleasureland next door, and Gayfield offers a unique, bracing and surreal spectacle with wonderful views when the game pales.

To reach the stadium turn right out of the stadium and take the right hand bend and follow this down to the sea – the stadium is straight ahead of you and is a ten minute walk at best.