Let me take you back to 26 June 1990.  England are one minute away from a penalty shoot out in the 2nd Round of the FIFA World Cup against Belgium.  Gascoigne floats in a free-kick from the left hand side which appears to be drifting over everyone’s head.  Everyone?  No, because at the back post is 24-year-old Aston Villa midfielder David Platt, on the field as a replacement for Steve McMahon and making one of his first appearances for the national side followed the flight of the ball perfectly and volleyed the ball home.  It could be argued that that one moment set Platt onto be one of the first footballing millionaires.  Less than 12 months after that goal Platt was on his way to Serie A side Bari for a whopping £5.5 million.

Three years later…Graham Taylor’s reign as England manager is coming to an inglorious end. His last game in charge is against San Marino. Bookies are stopping taking odds on an England win, despite Taylor’s reign and the failure of the team to reach the 1994 World Cup finals in the USA. Whilst it is possible that England could still qualify for the finals, it would take miracles elsewhere. The ask on them is simple – win by seven clear goals.

San Marino kicked off and hoofed the ball hopefully into the right-hand quadrant. Stuart Pearce picked the ball up and under no pressure at all played the ball back to David Seaman. Unfortunately, Davide Gualtieri had guessed this is what the experienced full back would do and nipped in and planted the ball past the Arsenal keeper. Just over 8 seconds were on the clock – the fastest goal in international history and still the greatest moment in San Marino’s history.

Relevance? Because those memorable nights had been played out on our TV screens live from Bologna’s Stadio Renate Dall’Ara. Fat Town, as it is often referred to in Italian culture, is known for its hearty food was our second destination for the day of Serie A football. After the magic in Reggio Emilia we had headed back down to the most important city in North Italy. Bar Turin. And Milan, of course. Not forgetting Venice mind, and Genoa now I think about it. Well, one of the most important cities anyway. 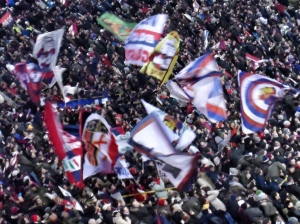 The almost completely open-air stadium would have been a beautiful venue back in June 1990, but in late November twenty-three years later, it promised to be bloody cold. Still, with Internazionale the visitors, we hoped the atmosphere created by the Tifosi Bulgarelli would keep us warm and entertained. Despite winning the Italian title on seven occasions, and being the most successful Italian team outside of Milan, Turin or Rome, recent times have been very tough on the Rossoblù.

Only one thing is more important to Italians than football, and that is food. So before the game we made sure we blended in with the locals by heading to an old-school Italian restaurant (aka one that didn’t serve Spaghetti Bolognese – a dish created for those bloody tourists) and ate our own body weight in local cold meats, cheeses, pasta (Squid ink tortellini filled with truffle carbonara as you have asked), washed down with a couple of beers. But no ordinary beer. Oh, no. Being one of the centres of style in the country, Bologna serve their bottles of beer in a clear plastic handbag, filled with ice. END_OF_DOCUMENT_TOKEN_TO_BE_REPLACED