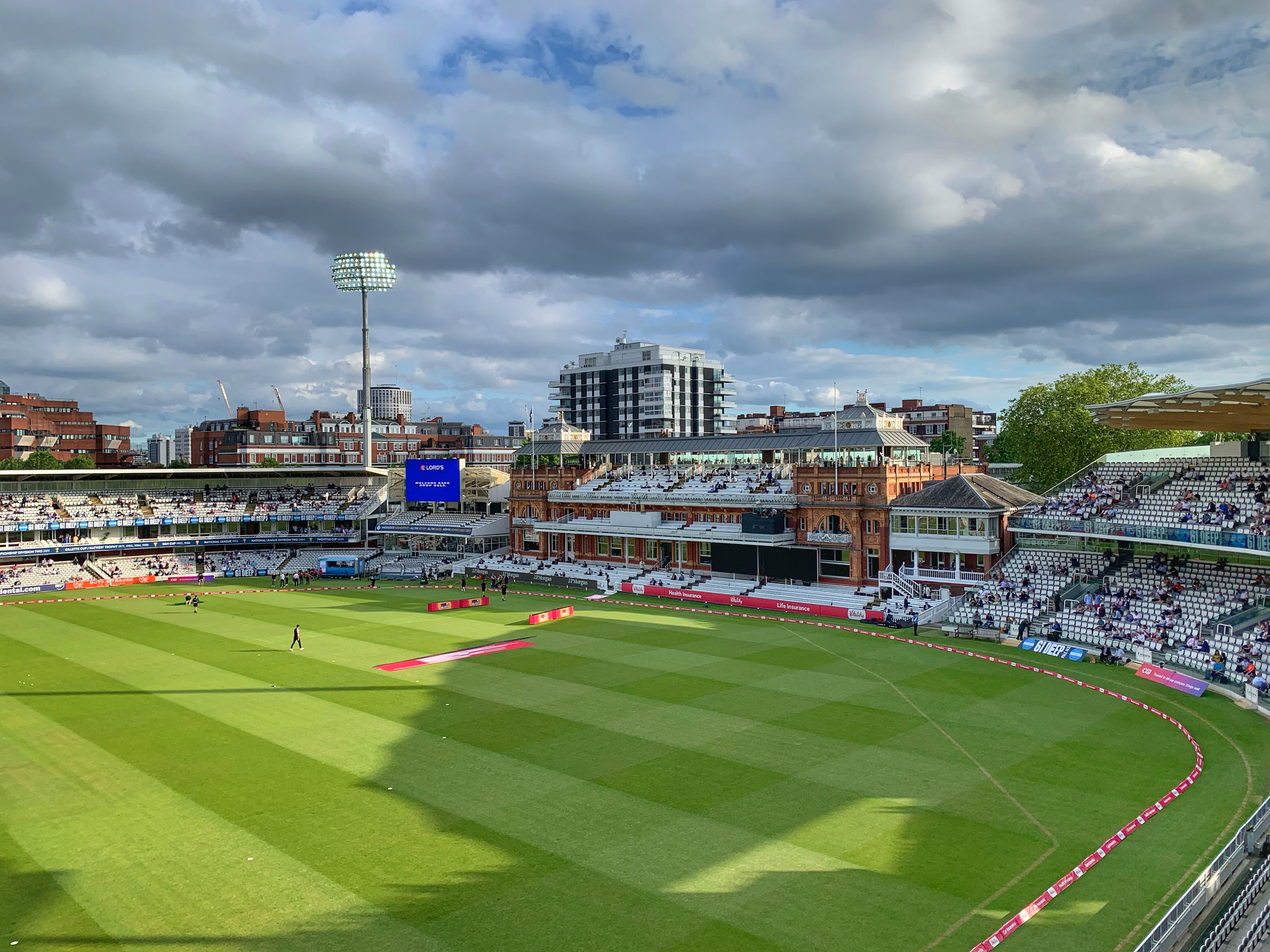 The home of English cricket, Lords, on a very pleasant Summer’s evening takes some beating. Whilst the images below show a relatively small crowd, spread out across the various stands, the game was in fact sold out, based on the restricted capacity Middlesex had to work towards.

The modernisation continues at a pace at Lords, with two new upper tier stands built either side of the Media centre, flanking it like a pair of gargantuan sticking out ears. Most of the top tier was empty for this game, with only 20% of the seats allowed to be taken for the game.

The traditional rivalry between the two sides has dissipated over the years but both teams were naturally keen to get one over on the other, especially in the opening game of this year’s tournament. Surrey, last year’s runners up, stuffed their side with big hitters and were favourites, being put into bat by the hosts.

For those sitting right in front of the “flame boxes” in the lower tier, the first few overs must have been incredibly toasty as Will Jack plundered the Middlesex bowlers. Jason Roy is no slouch when it comes to the T20 game – he is one of the finest opening batsmen in very limited overs cricket in the world, but Jacks had raced to his 50 off just 15 balls, the fastest ever half century in T20 history, whilst Roy was barely into double figures. A strike rate of nearly 300 from the 22 year old saw him poised to reach his hundred before a mix up between the two batsmen saw him run out at the non-strikers end after a desperate dive to get back into his crease.

The opening pair had put on 95 for the first wicket in just 50 balls and the run rate hardly dropped as short, powerful innings from Sam Curran, Jamie Overton and Tom Curran saw Surrey finish on 223 after their 20 overs.

To their credit, after a poor first over, Middlesex took the challenge on. Paul Stirling’s innings looked like it was going to match Jack’s, as he hit 44 runs in boundaries in his 58 before also being run out on his 28th ball. At the other end Steve Eskinazi kept the score ticking along at a run a ball. England captain Eoin Morgan was the danger man to remove for Surrey, and when he fell for 32 with the home side still needing 86 from less than six overs it was game over. The rest of the Middlesex batsmen limped through the innings with only Chris Green making double figures as their innings closed on 169/9, giving the visitors a comprehensive 54 run victory.

There was an air of inevitability among the home fans around me. “Well, we were playing Surrey” was one comment as we made our way down from the upper tier of the grandstand. “Take out Jack and Roy and they are bang ordinary”…”Oh, and the two Curran’s” one old chap said to his son on the walk back to the tube…”what about Overton and Batty?”, “Well, yes them too”.

Surrey will take some beating this season if tonight was anything to go by. Not only was it great to be back at Lords, but a treat to see the two powerful innings by Jack and Stirling. The crowds may not be allowed back in numbers yet but when they do, they are in for a treat.

My journey around the cricket grounds of England and Wales takes me west next for the T20 game between Gloucestershire and Sussex, and a first ever visit to the County Ground in Bristol.