The good news – our Five Things seems to be well received.  Viewing figures are up, readers are happy and even non-football fans are pressing the “Like” button.  But the bad news is that I’m flying to the other side of the world today so who knows when the next chapter in this little project will make an appearance.  Apparently Emirates will be showing all the games live on their flights, which is brilliant news, but the time difference may prove a little bit difficult to keep up, so please be patient.

So after the excitement of Super Saturday, we have slow Sunday.  If ever there was a fixture that could return this World Cup to its normal defensive status quo it was this game.  Switzerland, unbelievably, are 6th in the FIFA World Rankings at the moment. SIXTH?? Ahead of Italy, Netherlands, Belgium, France and even Scotland.  Their opponents, Ecuador, twenty places lower, qualified in 4th place in South America.  On paper this should have been a banker Swiss win, but I had a sneaky feeling that the South American flair would win the day over Swiss defensive efficiency. 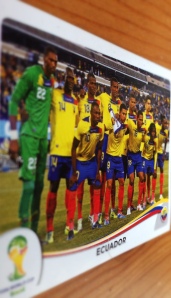 1. Empty Seats – When the teams walked out you thought, WOW! Look at the crowd…and then you realise they weren’t thousands of Swiss fans but actually empty seats…lots of empty seats.  All in the prime camera positions.  Doesn’t look good on FIFA does it? But actually, do they really care?  Of course not.  They have the sponsors money in the bank and they don’t care.  Twenty minutes later those seats are remarkably full…I wonder if they were moved from areas of the ground not visible by the main cameras?

2. Mexican Wave Barometer – A tournament record of 9 minutes 34 seconds before the cheers started going up to signify the start of the blight on world football.  Is that symptomatic of a boring game?  Ten minutes later the crowd felled into silence – a definite sign they were asleep.

3. Shadows – Billions has been spent on the media rights for the tournament and sensitivities on the time zones has been discussed, hence why the England game was moved from the initial 2am slot.  So why didn’t they think of the shadows of the roof when they scheduled the games?  If this was the 8pm game then it would be prime time still in both countries and the shadows would have disappeared

4. Like a salmon – Great cross, unmarked header into the net.  The keeper’s reaction?  Wait until it is in the net and then leap like a salmon, getting nowhere near it but at least able to say “I heroically tried to save it”…

5. Shaving foam – Good spot by my daughter who thinks that the referee’s special spray is actually shaving foam.  She claimed she saw the label on the can.  We tried it in the garden and it did “dissolve” after a minute or so.  However, when the grass was wet, it did get a bit messy.

Back in 2010 a group of us took part in the Cup of Good Hop, a one day beerfest that saw us decide which beer was the best in the World Cup Finals.  The winner? One of the rank outsiders, Switzerland, took the title, hands down with their outstanding 14% Samichlaus beer.  And four years later the beer, brewed in the Eggenberg Castle in Vorchdorf was back again.  What better way to prepare for a six-hour flight than downing one of these.  On the other side, Ecuador’s Club beer was meekly brought forward as the opponent.  They should have stayed in South America.