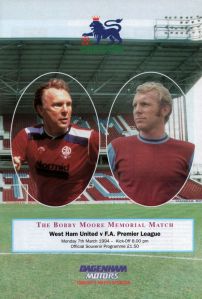 Last year marked the twentieth anniversary of the death of Bobby Moore. The date was marked with numerous events and presentation across the footballing landscape, especially in the East End. I never saw Bobby play in the flesh, but I have heard enough stories of his playing career from my Dad and brother to know that he was a special player. It is all too often in life that we only really remember the contribution of someone to our lives when they are taken from us.

Bobby Moore epitomised the image of West Ham during the 1960’s and early 1970’s.  Few footballers back then lived their life on the front pages of the newspapers like today, and the standard of behaviour (George Best aside) was that of a group of people who saw playing football as a privilege rather than a right.  Moore made 544 appearances for the Hammers before he moved onto Fulham.  He became the first man at the club to ever lift a trophy, when West Ham won the 1964 FA Cup final, and then just a year later leading the Hammers to a famous European Cup Winners Cup victory at Wembley.  Of course, he was also responsible for winning the World Cup twelve months later.

Despite playing a further 150 games in his career he remained a Hammer.  Few will know that he actually ended his career playing in Denmark, for Herning Fremand before he ventured into an unsuccessful career in management at Oxford City and Southend United.

Despite his love of football, after his stint as a manager he failed to get another job.  He became a summariser on the radio, a job he kept right up until his untimely death in February 1993 at the age of just 51 years old.  Football had lost a legend way before his time.

The outpouring of public grief took many by surprise.  The gates of Upton Park became the focal point for tributes and the club marked his passing at their next game against Wolverhampton Wanderers with tributes including retiring the number 6 shirt.  With the club in the process of redeveloping Upton Park, immediate calls were made for a lasting memorial of Bobby, and the contribution he had made to the club.

A year after his death on the 7th March 1994, West Ham arranged a very special and unique game to commemorate the opening of the new South Bank, to be named after Moore as a fitting and lasting tribute to the man who personified the club’s good image for such a long period of time.  With the Premier League still in its infancy, this game was to mark the first time that a representative Premier League side had ever been assembled (in fact this still remains the only occasion some 19 years later).

Unfortunately, West Ham were not lucky enough to be at the top table when the Premier League launched in 1992, having been relegated in the final year of the old Division One.  But in 1993/94 they took their place in the newly created money league.  Manager Billy Bonds had sold the fans favourite Julian Dicks to Liverpool early in the season as things didn’t look too rosy to start.  Just five goals in their opening twelve games hardly convinced the Upton Park faithful that the Premier League was the place to be.

However, the game was a respite to the struggles to retain their status in the Premier League.  The starting XI on that night for the Hammers was:-

Just over twenty thousand saw West Ham defeat the Premier League XI, managed by George Graham, which raised over £200,000 for two cancer charities – an amount that in today’s money-mad game seems very small.  At the time, the most successful manager in the English game was George Graham, and so he was asked to put together a squad, choosing one player from every Premier League side.  His initial squad was:-

Despite Graham’s style of play, the game was a great spectacle.  Whilst having the best years of his career behind him, Hoddle still looked class in the centre of the park, setting up Tony Cottee for the opening goal in the first half, giving Miklosko no chance.

However, after the break West Ham, playing with a style that is so alien to the current approach to the game, stepped up their efforts and it was no surprise when Clive Allen equalised thanks to an assist from his cousin Martin.  With just 16 minutes to go Joroen Boere scored the winner.

Rumours spread that this game would become an annual event, but alas it was not to be.  The club continued to keep a close link with Moore’s memory, raising funds for his cancer charity, and for a long period of time, proudly displaying the logo of his charity on their shirts.  Alas, that charitable act seems to have become a thing of the past under the current regime.

But for one night it is good to remember that professional players put egos (and salaries) aside to come together to celebrate and remember the memory of England’s greatest ever player.