For every six goal cracker we have seen there have been a number of games that were immediately forgettable. Whilst we have traveled hundreds, even thousands of miles to watch the beautiful game, you cannot guarantee the match will be decent. So let’s celebrate those games which gave football a bad name in 2012.

Lewes were dead and buried in the hunt for a play off spot until mid March, and then all of a sudden the squad discovered their mojo and went on an amazing run that saw them move into the play off spots with just a few games to go. Despite other teams having games in hand, the Rooks could almost touch end of season glory with a win in deepest, darkest Essex. Aveley’s Mill Road ground has seen better days. In fact it is one of the most desolate grounds in the Non League, held together with sticking tape and hard to love. Anything less than a win for the home side and they would be relegated. Banker away win, surely? Alas no. It was one of those games that you want to create a time machine and go back two hours and visit Lakeside instead. 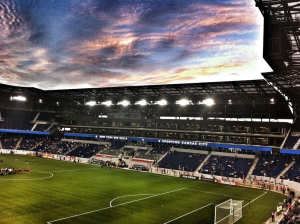 Nothing demonstrates American’s love of sport more than a scheduled midweek game in the MLS on the same night the Yankees are playing. With a few minutes to kick off you could count the crowd in the Red Bull Arena with your hands and toes. Whilst the club have build a brand new stadium (albeit in the middle of nowhere), and have marketed themselves well in the Tri-State area, the fans don’t really appreciate them enough to make a mid-week game at 7pm when the Yankees are also playing. But this game was bad, not just because of the lack of atmosphere but because the home side, with talented players such as Thierry Henry and Tim Cahill simply couldn’t be bothered to raise themselves to play. It was a torrid game, punctuated by two goals from the away team that gave them all three points. 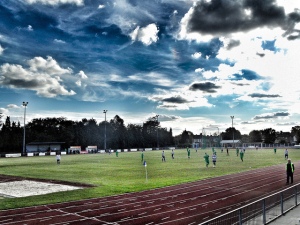 It is incredibly hard for Non League clubs in the area around west Essex/London borders to build a supporters base. Within a ten minute drive of Ilford there is a Premier League side, two nPower clubs and over a dozen Non League teams. Consequently clubs like Ilford have to fight for every fan. This game paired the two of the worst supported teams in the Ryman League North, with average attendances of 54 and 49 respectively. I’m sure the fact that they play at a municipal athletics ground hardly encourages floating fans, but games like this don’t help either. I watched for 45 minutes before I had to depart but in that time I didn’t see one chance on goal from either side. One half is not a reflection of a season, and I appreciate the predicament they are both in, but there has to be a loser for every winner and this year it is Ilford and Thamesmead Town. Sorry chaps.