Paris. The City of Love, home to Pepé le Pew, dancing polar bears (well, every fridge magnet I saw had them on), the birthplace of pole dancing and once home of the object of Oblix’s affections Falbala.   The most visited city in the world, where traffic jams stretch from La Défense in the west to Disneyland in the east. Where a small hotel room, no bigger than a six yard box can set you back €550 just because you can see the top of the Eiffel Tower on a clear day (which there rarely are) by hanging off the roof-top TV antenna. Paris, home of dreams, nightmares and everything in between.

So why am I here? Good question as my normal cheery outlook seems to be slightly clouded by the comments above. Let me set the record straight. I’ve spent more time in Paris than any other city on this planet bar London and Copenhagen thanks to a year-long work assignment that saw me hiring and firing all manner of people. With some of the most bizarre employment laws known to man I was sent to the Cite l’amore to “cut through the red tape”, which was American speak for let’s take a chance we won’t be sued for doing “that”. Since the heady days of 2001 I’ve been a regular visitor, and perhaps Paris and I got off on the wrong foot as I’ve always had a mild dread of trying to do anything that involves negotiation, contracts or due process. Don’t get me wrong, I love the Parisians to death, but sometimes cannot understand the quirks of life in the city. The city is simply an enigma to me. 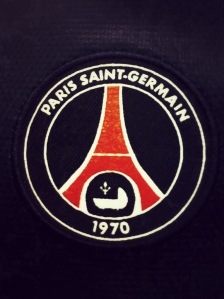 If ever one establishment summed up this enigma more than most it had to be Paris Saint-Germain football club. The premier team in one of the premier cities in the world. Alas, their standing has never been of premier quality. For a club that are actually younger than me (that makes me feel old) their dominance of the media would lead you to believe that they are the most successful team in the country. They aren’t. Historically that title could be said to belong to Saint-Étienne or more recently Olympique Lyonnaise. Olympique Marseille would have a thing or two to say about who was the biggest club in the country, and even regional sides such as Nantes, Lens and Lille would say they were more successful. But that is all about to change if you believe the hype.

In England we have seen numerous “new dawns” in terms of football. The creation of the Premier League in 1992, the arrival of Roman Abramovich and his millions of Roubles in 2003 and then four years ago the black gold arrived. The gold-plated Rolls-Royce rolled into town from the Middle East, with Sheikh Mansour bin Zayed Al Nahyan (known to Dave to his mates) in the driving seat. Manchester City went from being the perennial underachievers, playing in the third tier of English football just fifteen years ago, to out scoring and out spending anyone in the planet. Money does buy success, and the Abu Dhabi dollars delivered the Premier League in May 2012. But at what price? Last week it was revealed the club spent over TEN MILLION last season on agency’s fees alone. Ten million pounds is the equivalent of the operating budget for every non league team playing at levels 3, 4, 5 and 6 of the pyramid. Over 250 grass roots teams. Welcome to football in the 21st century.

However, they cannot buy European success and after a poor Champions League campaign last season, they followed it up with a disastrous one this time out, failing to even qualify for the Europa League consolation spot. They would be joining the likes of FC Nordsjælland, OSC Lille, Montpellier and Dinamo Zagreb in getting the wooden spoon. Not only that but they earned the honour of the worst ever record attained by an English club in the competition.

So why is that relevant to Paris? Well a similar situation was playing out in the city thanks to the massive cash injection from the Qatar Investment Authority. There arrival saw the appointment of Carlo Ancelotti as head coach and the acquisition of Zlatan Ibrahimovic and Thiago Silva. If the rumours (and official then deleted Twitter messages) are true then David Beckham and Ashley Cole will be wearing the famous blue shirt in 2013. Their league form has been poor to say the least. Defeats to the likes of Nice, Rennes and Saint-Étienne has seen pressure heaped on the Italian coach, just as it has been on Roberto Mancini at Man City. But in the Champions League it has been so different. Coming into the final game of the Group Stages they knew they had already booked a place in the Knockout phase along with Porto after an impressive campaign so far. The final home game against the Portuguese side would determine the group winners. 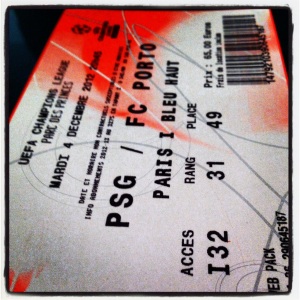 Co-incidentally I happened to have planned a visit to Paris for work purposes on the very day the game was taking place. No seriously, genuine co-incidence. And as luck would have it, my colleague Patrick knew a man, who knew a man, who once knew a women who knew someone who we cannot say who it is. The more I travel for business, the luckier I get. But the short story was that when I arrived in the office in Paris, there on my desk was a beautiful silver ticket for the match. It looked like it had been freshly unwrapped from a Wonka Bar.

Of course when you have that little beauty winking at you in the weak sunshine, work was an impossibility. The whole office was a-buzz with talk of the game. Football fever had at last arrived in the city. Sure, it had taken tens of millions of Euro to stimulate the interest but now it seemed here to stay.

With talks of reputation management strategies and online contingent liabilities wrapped up for the day I headed to the world’s worst value hotel, got changed and then went for my pre-match fitness test with the legend that is Hadyn. There is nothing this man doesn’t know about fine food and wine in the city and he regaled us with tales of recipes featuring stuff duck necks and tripe. Combining his ample skills in saving world-famous brands literally billions of dollars each year with a passion for producing his own food on his Essex farm gives him an aura when in any restaurant. Unfortunately the fare on offer in Restaurant Marco Polo had him only recommend the Kronenbourg at €8.80 a pint. 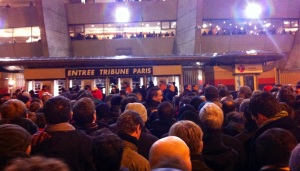 There are no easy journeys on the metro in Paris. Every line seems to snake around each other meaning to get from point A to B you often have to go via H, P and X. So a relatively easy trip from Opèra to the Parc des Princes directly westward took us up, down, left and finally right. The game had sold out weeks ago and outside the stadium there was a crackling atmosphere. The smell of strange grilled meat filled the air, the babble of the crowd was punctuated by the sound of police sirens and those bloody half and half scarves were on sale everywhere.

The Parc des Princes is showing its age these days. A stadium was first opened on this site in 1897, but the current ugly concrete stadium opened in 1972.  The stadium has hosted it’s fair share of big matches including six European finals, two European Championship finals and of course numerous games in the World Cup codes for both football and rugby union. The noise in the ground can be very intimidating but sit anywhere above row 5 in the upper tier and your view at eyeline is of a concrete roof. The PSG fans are famed throughout France. Normally at the north end of the stadium you have the Boulogne Boys, one of the most legendary sets of Ultras in Europe. But for this game the fans had been split up, with the authorities worried of potential flashpoints with the Porto fans.

PSG 2 Porto 1 – Parc des Princes – Tuesday 4th December 2012
As the final whistle blew, my colleague Patrick offered up a high five. Top spot in the group meant an easier draw in the Knockout stages. But then I pointed out to him that the three other Groups finishing tonight would see AC Milan, Arsenal and Real Madrid as potential opponents. His smile faded slightly until I re-assured him they would get Celtic and be as good as through to the last 8 (joke Scottish football fans).

PSG started the game with some flair, using the pace of the wide men to get in behind the Porto defence.  The first real chance fell to Zlatan, no surprise there, but he seemed to have left his shooting boots in the Friends Arena as he failed to convert Pastore’s cross.  The centre-back pairing of Thiago Silva and Alex, once of Chelsea, seemed to have all the time in the world, rarely threatened by the Porto attackers who seemed to be here just for the shopping in the Champs Elysees.  It was no surprise when the French side took the lead, with Silva heading home unmarked in the 30th minute.  Surprisingly their lead only lasted four minutes when Martinez headed home after Danilo left Martinez for dead on the flank.  Half time and honours were even.

Was this going to be a dead rubber?  Not at all.  The final stats showed that there were 29 shots in the game, the vast majority in the second period.  The referee somehow managed to brandish six yellow cards in the second half, trying to steal the show himself, but that honour fell to Helton, the Porto keeper who seemed to push the ball into his own net after Lavezzi’s weak shot seemed to be easily covered at the near post. Two-one and that was enough to wrap up a very successful Champions League first stage.

So time to head back home.  After negotiating the maze under the city I arrived just in time for last orders back in the Marco Polo.  It had been a good night, and whilst my taste buds were alive to the sound of my non-Footballing colleagues stories of fine food and fine wine, my final Leffe of the night slipped down well with the sound of those Boulogne Boys ringing in my ears…”O Ville Lumière, Sens la chaleur, de notre coeur.  Vois-tu notre ferveur, Quand nous marchons près de toi, dans cette quête.  Chasser l’ennemi, enfin pour que nos couleurs…Brillent encore”