It was interesting to note last week that, after both Manchester clubs went out of the champions league, the considered opinion of at least one national newspaper was that they now faced the humiliation of Thursday night football in the Europa League. 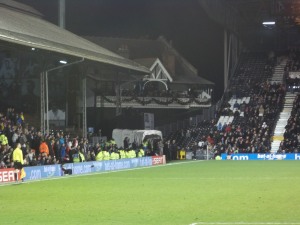 So are clubs that annoyed at being asked to play in a competition that in the eyes of many, is like sour milk to the godly ambrosia that is the champions league?

I’m sure both city and united will find a way to cope with this “humiliation”, and I would expect them both to try and win the competition as well. Of course, what does that headline say about Stoke or Fulham? Neither of these clubs would probably find it embarrassing to play in the Europa league; sure, united have been very successful in recent years, so it could probably be considered a step backwards. But city haven’t played in the main European tournament since 1968. With no recent history in either the European cup or Champions league, is it really a humiliation? The amount spent on the team might suggest so, but it does take time for a team to settle, and no matter the opposition, European competition is very different to the premier league.

Now that the Champions league group phase is over, The Europa league has the European week to itself this week, so all attention is on the teams attempting to get to Bucharest for the final in May.

Tonight, Fulham need a win to get through to the knock-out stage, where they could meet a team facing up to the shame of only playing in the Europa league. If they are to progress then they will do it without Andrew Johnson, sent off in the last minute of the defeat in Enschede a couple of weeks ago. Their opponents tonight though are already out. Odense have won just one of their five group Games, but that was in Krakow, and it is that result which means that Fulham are in second place in the group, rather than third.

Last time out on the group stage, Fulham left it until the last game to go through, when against much informed opinion, they won away to Basle to progress to the knock out rounds. At least this time around, they won’t have to travel too far for the crucial game.

Wednesday 14th December 2011, Fulham v Odense BK, Craven Cottage
It is a cold night in West London, and those making their way along the side of the river are certainly wrapped up for the weather. Clearly they want the team to inspire them to get them going, and I suppose that if the fans are jumping up and down, that they might generate some kind of warmth. 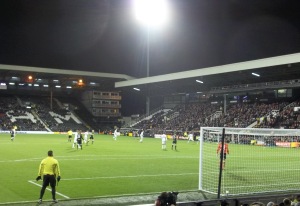 The visitors start well, but it is only a start, and soon Fulham are in the ascendancy. The first effort is a shot from distance by Chris Baird, and although it is well struck, it is more or less straight at the goal keeper, and he makes a comfortable save. Odense aren’t creating anything, and for the first half an hour or so, it is all Fulham. Dempsey shoots wide a few minutes after Baird’s effort, and later in the half, manages to skewer a shot from what looks like about 30 yards so wide that it manages to go for a throw in. His pleading looks towards the referee for a foul are completely ignored, and the Danes restart the game with their throw. Hangleland goes close, although the blast of the referee’s whistle means that a free kick is awarded to OB, and Dempsey has a further effort which is cleared as well. All the pressure is going one way, and although the crowd isn’t anxious, they clearly want that first home goal to make the evening a bit more relaxed. This doesn’t apply to our row of seats though; several times during the half, we have to stand up to let people in or out. Clearly the national “ants in the pants” championships have been taking place today, and we have the finalists all sitting (or standing) next to us.

Twenty seven minutes into the game, and Fulham get the goal that their play has deserved Clint Dempsey (who scores with his right and left, and apparently makes Drogba look not very good), is the scorer, following good work by Zamora (restored to the first team), and Kerim Frei, Four minutes later and Fulham go 2-0 up, when Frei is played through into a one-on-one situation with the OB goalkeeper and he places the ball past him into the net. The game looks to be over already, and although Odense start to keep the ball better as the half draws to a close, their passing is only going sideways, and Utaka is looking a very isolated figure up front. His running across the Fulham back line is not doing anything to get his team-mates to pass the ball to him, and he waves his hands in a frustrated manner in the air several times.

As the half ends, Neil Etheridge, making his debut in the Fulham goal, has had very little to do, aside from a couple of crosses, possibly making this one of the easiest goalkeeping debuts for a while. Fulham are doing ok, and with them starting the game in second place in Group K, that is where they will finish up. All they need to do is to do the same in the second half.

The game resumes and the first fifteen minutes don’t seem to have much of a pattern to them. Fulham appear to be happy with what they have already, and although Odense are looking a lot better on the ball, they still aren’t creating too much in the way of goal scoring opportunities. Defending the goal at the Hammersmith End, Stefan Wessels (once of Everton) looks like a lumberjack who is having a night doing something else, sporting as he does, a magnificent beard and head of hair. Being someone that is more than a bit lacking in the hair department, his mop is definitely to be admired. Alongside him is a assistant referee standing behind the end line who clearly looks very cold, with tights, gloves, and what looks suspiciously like a magic wand. Perhaps it is, as all the action seems to be happening at the other end of the ground. Either that, or Harry Potter has found a new job.

Then just after the hour, the whole atmosphere changes. Odense score against the run of play following a free-kick by Andreasen, which manages to sneak inside the near post, past Etheridge. Suddenly, the whole crowd is on edge again, and now the possibility of not qualifying starts to come into view. Phones are anxiously checked to see how Krakow are getting on against Twente, but the home team need to win, and as it stands they will qualify. As the game wears on, there are the usual substitutions which break the flow, but Fulham seem comfortable enough. Odense are starting to be a bit more threatening, but its still nothing to worry the home fans, and as the game goes into the last five minutes, the songs are becoming louder about going on a European tour, and you can almost sense that some are already looking forward to the draw for the next round.

With a minute of normal time left, Martin Jol replaces Bobby Zamora with Orlando Sa. Zamora leaves the pitch to a huge appreciative round of applause from the fans; the game is in the bag, and Fulham can start to look forward to more European football after Christmas.

Another check of the phone reveals Krakow beating Twente 2-1, but with Fulham holding a one point lead, it doesn’t matter. With Fulham winning, they will qualify along with the Dutch team.

There are three minutes added on for stoppages, and with two and a half of those played, the newly arrived substitute, Sa, is played through. Running alongside a defender, as he approaches the penalty area, he tries to cut back onto his right foot, but the defender gets a touch on the ball, and it breaks loose. Odense break forward for one last attack, but the confidence that the whites are through is still strong as the Danes get the ball down to the right wing. A cross is swung over, and there is another newly arrived sub, Djiby Fall to head the ball into the corner of the net.

There is barely time for Etheridge to pick the ball out of the net before the Israeli whistles for full time. There is stunned silence for a second while everyone tries to work out what has just happened. The phones are out again, but it is bad news from Poland. Thirty seconds before the end, the chance was there to make it 3-1, but they blew it, and instead it finishes 2-2 and Fulham are out. We’ve all been to games where there has been a last minute goal to decide a game, but I have to admit that I have never been to anything quite like this.

As we make our way out into the roads, there are still a couple of people trying to sell match scarves, which is not greeted in the best way by one nearby fan. We all love the game for what it can serve up, and this was just another reason (for us neutrals at least) why this is the best game in the world. But try telling that to a Fulham fan…